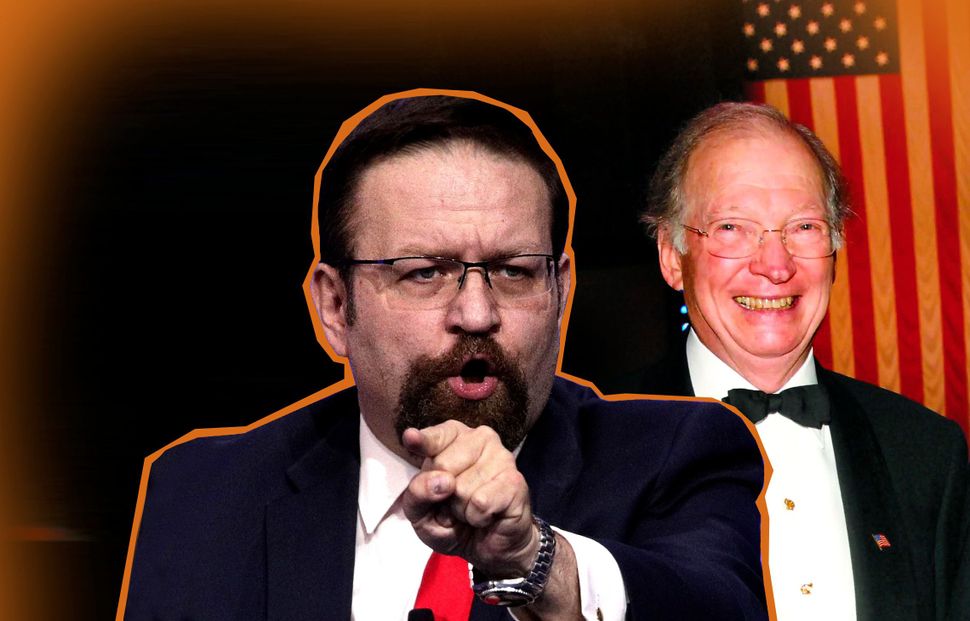 Sebastian Gorka, who sits in the Trump White House as deputy assistant to the president just five years after becoming a U.S. citizen, has faced growing controversy about his academic and professional credentials. Critics have also highlighted his past association with racist and anti-Semitic figures in Hungary, where he lived as a citizen for many years before coming to the United States. Questions have been raised, too, about whether he has been granted the security clearances that would ordinarily be necessary for someone working as the president’s chief counter-terrorism consultant.

But through all this, he has had the support of two figures who have been key to his career: Steve Bannon, President Trump’s key strategist, and Thomas A. Saunders III.

While Bannon is well known, Saunders is a lesser-known figure to the general public. But Saunders, a private equity fund manager, is a major donor to the Republican Party, chairman of the conservative Heritage Foundation and related to Gorka’s wife, Katharine Cornell Gorka.

He appears to have played a major role in Gorka’s quick ascent from obscurity to the top ranks of U.S. government.

In the mid-2000s, Sebastian and Katharine Gorka were living in Budapest, running a small think tank that listed only the two Gorkas as employees. Sebastian Gorka was a student at the time, working on his doctorate. And yet, in 2005, the same year Saunders became a trustee of the Heritage Foundation’s board, the Gorkas’ small think tank — which has almost no record of any significant activity or research — co-sponsored an event with the Heritage Foundation, one of Washington’s most influential conservative institutions.

Similarly, as The Washington Post noted, in 2014 Gorka took a job at the Marine Corps University, but he was not a government employee — his chair was funded by Saunders. Saunders, however, denied exerting any influence over the school’s selection of Gorka for its two-year position.

While the Trump campaign paid Sebastian Gorka for consulting work in late 2015, by the spring of 2016 — when Saunders chose to donate to Cruz, and Katharine Gorka became a formal adviser — Gorka was publicly critical of Trump, calling him “full of bluster” in a radio interview. “There’s no plan. There’s no strategy. So I can’t judge him because he’s really a black hole,” Gorka said of Trump in April. “So the last one that’s really serious is Senator Cruz,” he added. Nevertheless, in June 2016, Keep The Promise I was transformed into a pro-Trump PAC called Make America Number 1, hiringKellyanne Conway as pollster.

The Gorkas quickly became publicly more enthusiastic about Trump. And last October, Saunders donated over $48,000 to Republican Party committees. After the election, Katharine Gorka was picked to serve as a member of Trump’s Department of Homeland Security landing team, and her husband was named deputy assistant to the president.