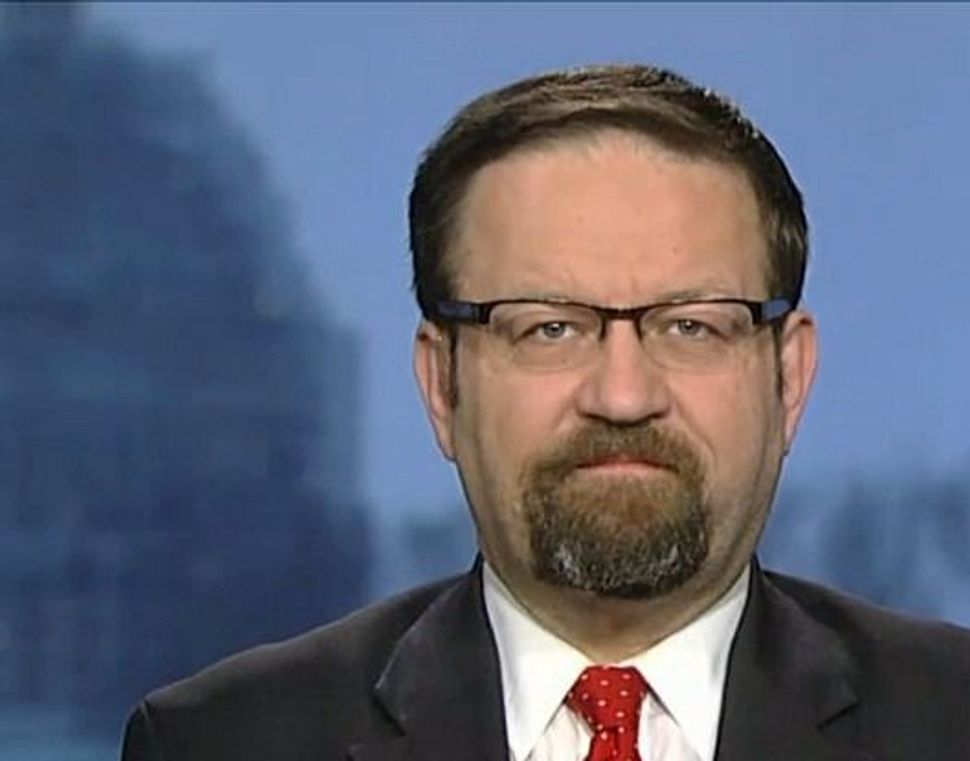 On the website Tablet, writer Liel Leibovitz takes the Forward to task for our report on claims by leaders of the far-right Hungarian group Vitézi Rend that Sebastian Gorka, President Trump’s counter-terrorism aide, is one of their members.

In his piece, Leibovitz reports that he spoke with Gorka, who firmly denied the affiliation.

“I have never been a member of the Vitez Rend,” he reports Gorka telling him. “I have never taken an oath of loyalty to the Vitez Rend. Since childhood, I have occasionally worn my father’s medal and used the ‘v.’ initial to honor his struggle against totalitarianism.”

Strangely, when Gorka issued his own formal and official statement through the White House Press Office addressing the Forward’s story Thursday evening, this denial was nowhere to be found.

“I’ve been a committed opponent of anti-Semitism, racism and totalitarianism all my life,” the statement said. “Any suggestion otherwise is false and outrageous.”

Gorka’s official statement did not address assertions by Vitézi Rend leaders that he had sworn a lifelong oath of allegiance to their group, which is listed by the U.S. State Department as having been “under the direction of the Nazi Government of Germany” during World War II; nor did it address the question of whether he had disclosed this reported affiliation to government officials when he immigrated to the United States or later, when he obtained American citizenship, as each process would require.

In his article criticizing the Forward, Leibovitz cites only one source from our story, Vitézi Rend leader Kornél Pintér, leaving readers with the wrong impression that Pinter was our only source.

In fact, the story cites two Vitézi Rend leaders who explicitly confirmed Gorka’s membership in the group and a third who said only sworn members of the group are allowed to use the honorific initial ‘v.’ as an addition to their name, as Gorka has on various official occasions.

Moreover, Leibovitz chose to ignore or dismiss the explicit assertion of Pintér in his quote:

“Of course he was sworn in,” Pintér told the Forward in a phone interview. “I met with him in Sopron [a city near Hungary’s border with Austria]. His father introduced him.”

The question is not whether Pintér personally witnessed Gorka’s initiation into the order, but whether he reliably knew of it. As Pintér noted, he knew the family intimately, and talked at length about his respect for the elder Gorka, telling reporter Lili Bayer that Sebastian Gorka did take the oath to the organization.

To clear up any doubt, we have posted on-line an audio recording of the complete interview (in Hungarian) that Bayer conducted with Pintér.

As noted in the story, Pintér’s affirmation of Gorka’s membership was confirmed by a second source, Gyula Soltész, a highly placed national leader of the Vitézi Rend who has access to the group’s membership rolls.

And there is a third source, not cited in the story. In a March 14 email, Imre Fehér, another local Vitézi Rend leader, wrote Bayer, “In his phone conversation with you last night, Kornél Pintér briefed you in detail about vitéz Sebastian Gorka and his late father,” urging her to contact the organization’s leader, if necessary, for further information. [Emphasis added for “vitéz,” which is the honorific the group gives to sworn members of the organization, thus constituting an additional confirmation.]

While reporting, Bayer contacted Gorka by email two times each at his office and home email accounts, asking if he was a member. He never responded, as we reported.