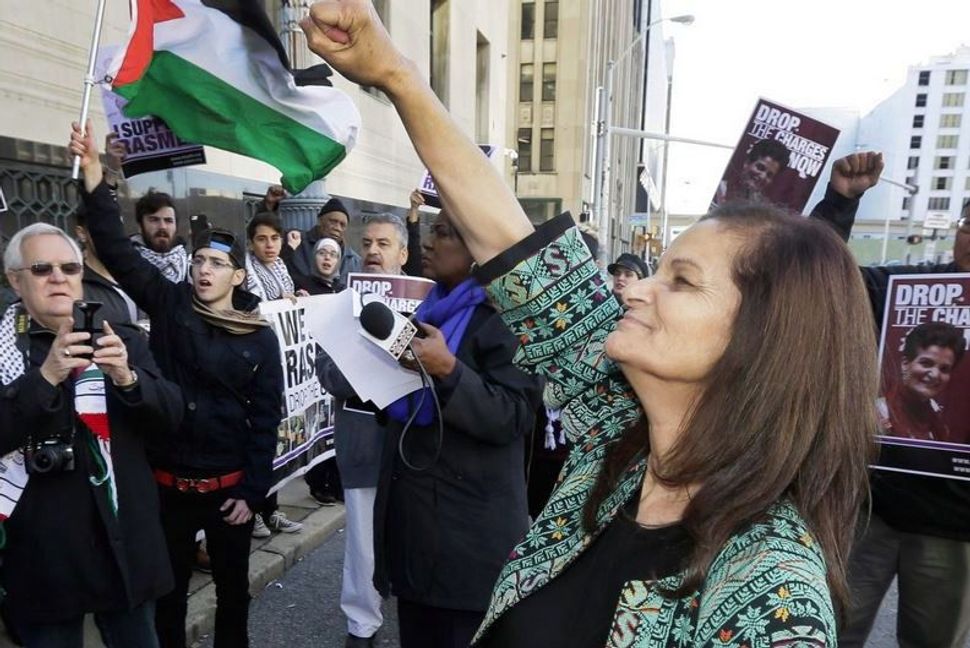 Jewish Voice for Peace, a group already controversial among establishment Jews for its support of an Israel boycott, attracted extra attention this month thanks to a featured speaker at its upcoming biennial conference here.

Rasmea Odeh, who was convicted in 1970 for a 1969 bombing at a Jerusalem supermarket that left two dead, was scheduled to be among those addressing the group when its members gather at the Hyatt Regency McCormick Place from March 31 through April 2. But Thursday, those plans were left up in the air after news broke that Odeh had agreed to a plea deal with federal authorities that will result in her loss of U.S. citizenship and deportation.

Government prosecutors say Odeh covered up her conviction and imprisonment in Israel when she entered the country in 1995 and applied for citizenship in 2004. He decision to accept the plea deal will spare her prison time for committing that offense.

But meanwhile, Jewish Voice for Peace’s decision to feature Odeh, who is the associate director of the Arab American Action Network, has moved other Jewish groups to strongly criticize the organization.

The Jewish United Fund of Metropolitan Chicago, which usually stays clear of politics and controversy, is among the groups criticizing JVP. Members of the Israel support group StandWithUs have also protested the event and requested the Hyatt, unsuccessfully, for permission to hold a memorial service there during the conference for the two students killed in the 1969 terrorist attack.

“I was so upset and outraged [that] anyone’s unrepentant killer should be given celebrity status and featured [so as] to mislead people,” said Peggy Shapiro, the Midwest director of StandWithUs.

Despite her conviction in Israel, Odeh’s culpability in the terrorist attack is disputed by her and her supporters.

In 1979, after her release from prison in a prisoner exchange, she testified before a United Nations special committee in Geneva that Israeli soldiers had tortured and sexually assaulted her for 45 days, and that the only reason she confessed to the bombings was to save the life of her father, whom she said the soldiers had also beaten.

Later, Odeh, who immigrated to the United States from Jordan in 1994, became an attorney and practiced law here before joining the AAAN. In 2013 she was arrested for failing to disclose on her immigration forms that she had been convicted of a crime. In a well-publicized trial in Detroit, the judge stripped Odeh of her citizenship and sentenced her to 18 months in jail, after which she would be deported.

Odeh appealed the decision, which was reversed, and prosecutors were set to retry her in May—a process her plea deal will upend.

At her first immigration fraud trial, Odeh testified that she still suffered from post-traumatic stress disorder as a result of Israeli law enforcement authorities torturing her. Years after her conviction, Israel’s Supreme Court found that the Shin Bet, Israel’s domestic security agency, had engaged in the torture of Palestinian prisoners over the years, but there is no confirmation of Odeh’s claims. Israel, meanwhile, denies her claim.

Today, supporters of Odeh, who was one of the organizers of the March 8 “A Day Without Women,” consider her an important figure in the Palestinian liberation movement. JVP was unrepentant about its invitation to her.

“We are eager to hear from Odeh, a feminist leader in the Palestinian and Arab-American community in Chicago, precisely because she has survived decades of Israeli and U.S. government persecution and oppression, and also because she lives and breathes the essential work of community organizing,” the group said in a written statement released before news of the plea deal broke.

Naomi Dann, a spokeswoman for JVP, said that the controversy was a surprise. “We invited Rasmea as a local leader,” she said. “We’re a grassroots organization and we value grassroots leadership, so we reached out to her because of that.”

But Jay Tcath, executive vice president of the JUF, said he has studied the facts of Odeh’s case and was not convinced of Odeh’s claims. “I’ve read much of her defense as articulated by her attorney and herself,” he said. “I never heard them deny that she did it. I didn’t hear her express remorse. It would seem as if all she’s looking to do is to use the law to get out of what she’s been accused of.”

The basic facts are that, in 1969, a bomb planted by the Popular Front for the Liberation of Palestine exploded in a supermarket in Jerusalem and killed two Jewish students from the Hebrew University. The PFLP bombed the British Consulate in Tel Aviv four days later. Odeh, then a 21-year-old university student in Ramallah, was arrested; she later confessed to the bombings. After a six-month-long trial reportedly attended by an observer from the International Red Cross, she was convicted and sentenced to life in prison — a sentence upended by the prisoner exchange.

“You can’t make her out to be some heroine for social justice,” Shapiro added. “We want social justice, but we don’t want heroes who are murderers. That’s not justice.” These feelings, she said, are not just because Odeh is Palestinian: “If there were a Ku Klux Klan convention, if they featured someone who prominently lynched people, I would feel the same abhorrence.”

StandWithUs requested permission from the Hyatt to hold an interfaith memorial during the conference for the two young men killed in the supermarket bombing. The Hyatt said it would have to ask for permission from JVP, which declined to let StandWithUs hold the memorial.

“We are truly outraged to know that Hyatt is allowing this festival of hate to take place at one of its flagship hotels,” Shapiro wrote the Hyatt on behalf of StandWithUs. “We are especially saddened as the Hyatt Regency McCormick Place has been a home to many events for the Chicago Jewish community.”

Dann emphasized that Odeh is only one part of the JVP conference. “The themes of our conference are Islamophobia and racism and anti-Semitism and what this moment means,” she said. “We’ve been planning this since before Trump’s election. This is a chance for us to look at systems and trends and building systems to fight back and work for justice for all people.”

The JUF plans to take no further action regarding the convention. But its relationship with JVP has been contentious; members of JVP have protested outside the JUF’s Chicago offices on several occasions in recent months, most recently because JUF has facilitated educational trips by Chicago police officers to Israel and because it failed to condemn Trump’s appointment of Stephen Bannon as White House chief strategist. Tcath dismissed the protests as “not even a minyan.”

“JVP’s social media creates the perception of a lot of activity,” he said. “But a campaign that demonizes Israel is of little appeal to the vast majority of Jews. Rasmea Odeh’s participation in the JVP conference is not the only reason 99.9% of Chicago Jews will not be attending.”

Dann noted that JVP is expecting 1,000 participants at its conference, its largest attendance ever.

This article has been corrected to eliminate an error in the original version, which stated that the group StandWithUs had asked the Hyatt Hotel to cancel its agreement to host JVP’s conference. That assertion was incorrect.