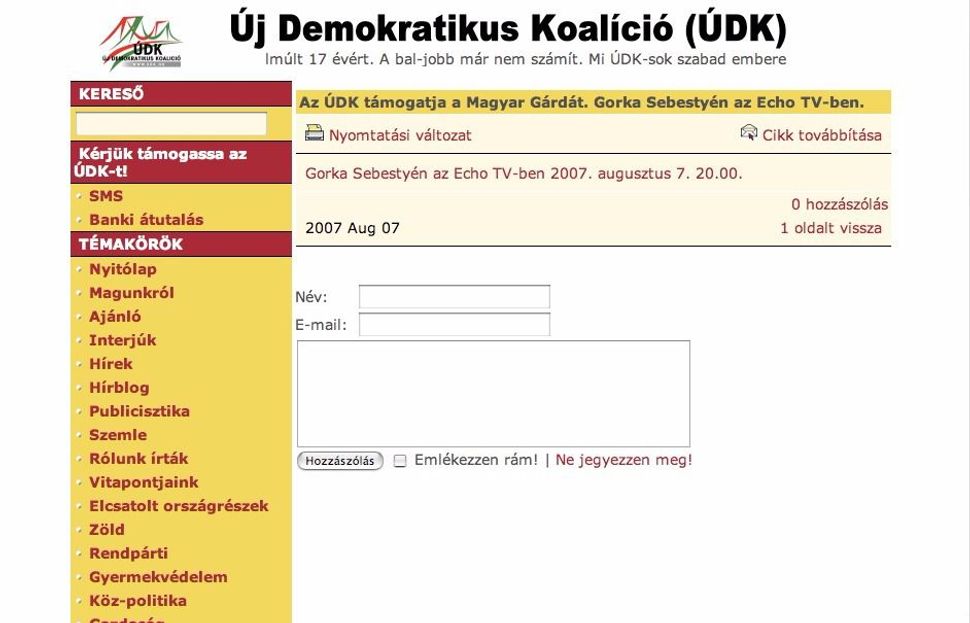 Responding to an April 3 Forward story, two websites on the right—RedState.com and the Federalist—have charged the Forward with mistranslating or decontextualizing controversial comments by current senior White House aide Sebastian Gorka in a 2007 interview.

In the interview, as reported by the Forward, Gorka voiced support for and defended the establishment of the Hungarian Guard, an extreme right-wing paramilitary militia led by known anti-Semites.

Before publishing, the Forward independently verified our Budapest reporter’s translation of his comments with two independent native speakers and stands by its story—Gorka, in the interview, supported the formation of the Guard, then in process, and already, as the interviewer noted, raising alarms among Hungarian Jews and others due to the extremism of its leaders and members.

Since the report’s publication we have also consulted with Jason Wittenberg, an associate professor of political science at the University of California at Berekley, specializing in Eastern Europe. After reviewing the video and the claims of mistranslation, Wittenberg stated:

“I concur with your interpretation of key lines:”

But as noted in the story, there is an even more authoritative confirming source: Gorka’s own party.

Immediately after the interview, the New Democratic Coalition, which Gorka co-founded with two former members of the far-right, anti-Semitic Jobbik party, posted news of the interview on its website under the headline: “UDK Supports The Hungarian Guard: Sebestyen [Sebastian] Gorka on EchoTV.”

Much later, it appears that Gorka, who was in the midst of an effort to win voters from Jobbik and another, larger right-wing party, Fidesz, had second thoughts about how he wanted to position himself. Nearly two weeks after the televised interview, the party complained in a post on its website that his comments had been “misinterpreted.”

Based on the Forward’s reporting, it appears the party, of which Gorka was a founding leader, got it right the first time.