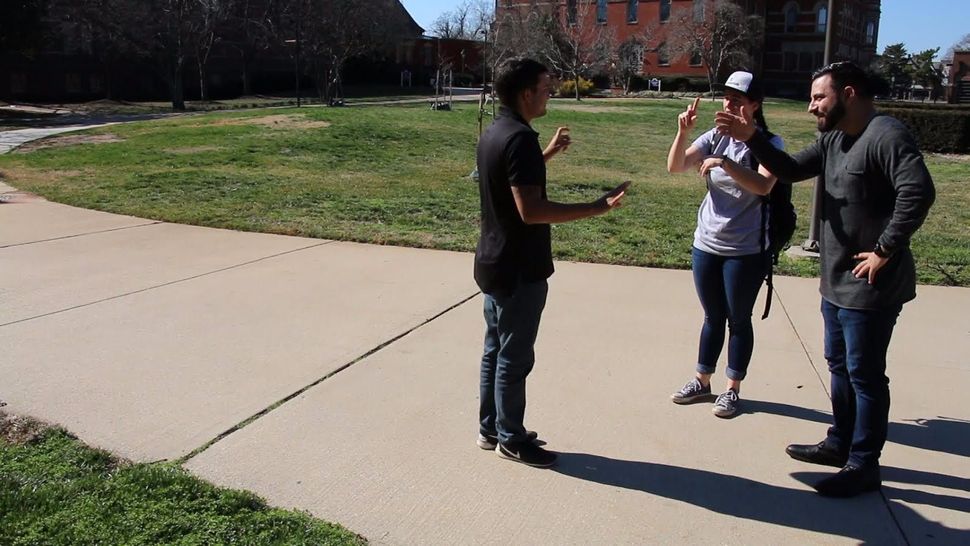 Gallaudet University is like many other colleges and universities around the world, with students gathering in common areas to chat with their friends and set up study sessions. But there’s one thing that’s less common about the chitchats at Gallaudet: They’re all in American Sign Language. The Washington, D.C., university, sometimes known as “Gally,” was founded in 1864 and has since become the world’s foremost institute of higher learning by, and for, the deaf.

Like many universities, Gallaudet has a Hillel to serve as a home for its Jewish students. But Jacob Salem, who was named the Gallaudet Hillel’s program director last year, finds creative ways to negotiate the needs and hopes of the unique Deaf-Jewish community that he serves. This can include anything from bringing in a deaf rabbi to inspiring students to teach a mini-course in Israeli Sign Language.  As the first deaf Hillel leader in the country, he’s charting a new path and broadening the definition of what it means to be an inclusive Jewish community.

Salem was born in New Jersey and grew up between the United States and Israel, meaning he’s fluent in both American and Israeli sign languages. (He also speaks English, Hebrew, some Spanish and a sprinkling of Latin for kicks.) And although his designation as America’s first-ever deaf Hillel leader is impressive, Salem wears his history lightly.

In a world where the struggle against stigmatizing the “other” as foreigner, as Jew or as deaf is ever more important, Salem is doing crucial work in the nation’s capital.

Salem’s work reminds us that true inclusivity in the Jewish community means making authentic communities that are welcoming, not ersatz ones that everyone can join — it’s about making a table for yourself at a celebration that has already been set.

Salem’s shabbat dinners at Gallaudet are Deaf-first — first and foremost, they are conducted in ASL as the primary language and with Deaf guests at the center of the conversation, with hearing guests joining them and not the other way around. While it’s subtle, that’s a significant change from the way many communities have approached inclusivity. We could all use his shabbat dinners as an example of how we can make sure everyone has a seat at the table.