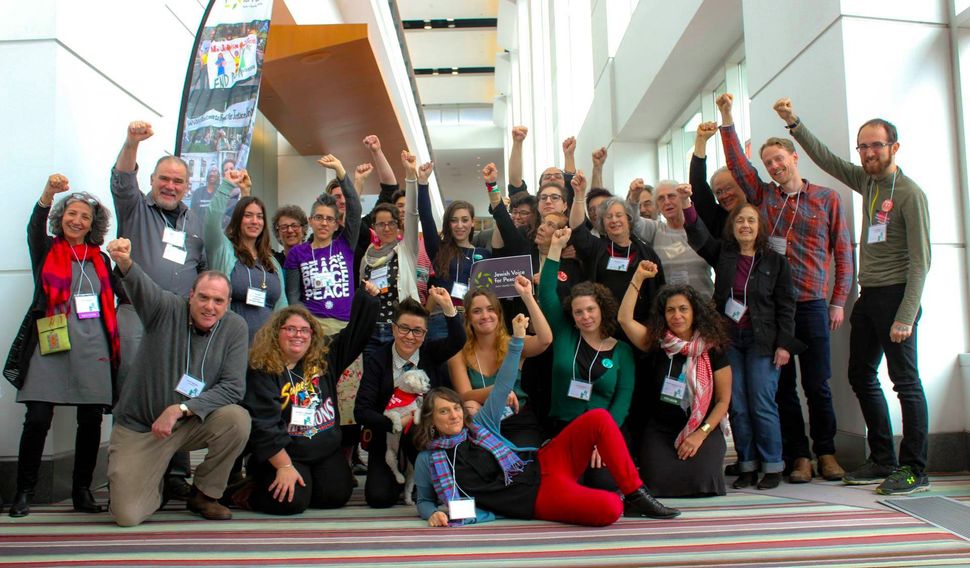 Jewish Voice for Peace, the controversial American Jewish group devoted to fighting Israel’s occupation of the West Bank and its siege of Gaza, drew some 1,000 people to its biannual meeting in Chicago last weekend—the largest crowd since the group’s founding 20 years ago.

But there was something else JVP’s meeting attracted for the first time that the group’s executive director, Rebecca Vilkomerson, pointed to with equal pride: condemnation from the government of Israel.

In an official statement Israel’s Minister of Strategic Affairs, Gilad Erdan, labeled the gathering “a hate conference”—in particular, for JVP’s decision to feature as one of its speakers Palestinian American activist Rasmea Odeh.

Odeh served 10 years in prison in Israel for her role in a 1969 bombing in Jerusalem that killed two civilians. (She claims she confessed to the deed after being tortured by Israeli military.)

In his statement, issued last week, Erdan declared, “As a Jew, I am ashamed that a conference filled with hatred for Israel, and that is hosting a terrorist as a central speaker, is led by a Jewish organization.”

But from the podium of the conference on Friday night Vilkomerson hailed the Israeli cabinet official’s statement. “Make no mistake,” she told the enthusiastic crowd. “This backlash is evidence of our growing power.”

Jewish Voice for Peace has been in contention with mainstream Jewry for years, not just for its solidarity with Palestinians others regard as terrorists but also for its advocacy for the movement to boycott, divest from and sanction Israel—or BDS, as it’s known. The movement, meant to pressure the Jewish state to end its 50-year-old occupation of the Palestinians, has been especially active on college campuses, and JVP has thrived there in recent years.

And it is growing.

At its conference this year, beside its declared mission of “advocating for just policies in the US with regard to Israel/Palestine,” JVP took on an additional mandate. The campaign and election of Donald Trump as president has brought into mainstream discourse his call for a Muslim registry (now seemingly abandoned), his contested executive orders placing restrictions on immigration from initially seven—now six—primarily-Muslim countries, and his inveighing against immigrants and refugees as threats to America.

Added JVP deputy director Rabbi Alissa Wise, “We have an opportunity to open ourselves to our neighbors at this political moment. I hope people will do that.”

Behind the scenes at Chicago’s McCormick Place Hyatt, however, the meeting’s organizers braced themselves for what they euphemistically referred to as “uninvited guests.”

Elsewhere in the sprawling hotel, other groups gathered to protest JVP. On Sunday evening at the same time Odeh was scheduled to speak, StandWithUs, an organization devoted to supporting Israel, held a memorial service for Edward Joffe and Leon Kanner, the two victims of the 1969 bombing for which Odeh was convicted. Fifty people filled the suite StandWithUs rented for the evening, including representatives of the Joffe and Kanner families, and the event was broadcast over Facebook.

JVP attendees, meanwhile, were advised to wear their badges at all times, and 180 volunteer “de-escalators” circulated throughout the crowd, prepared to restore calm if necessary. Badge-checking was especially strict before the Sunday evening plenary session.

Still, JVP was unaware of the StandWithUs memorial; it had held its own earlier in the day.

“We mourn the loss of all life,” Wise said. “But it feels like their mourning is fetishization of the victims and is meant to discredit Rasmea, and discredit our movement for justice.”

Wise emphasized, “The most important thing for people to understand is that we’re motivated by love. For me, what came through this entire weekend is a vision for justice that includes everybody.”

There had been some doubt about whether Odeh would be able to appear after she agreed to a plea deal on March 23 to avoid a retrial for immigration fraud. Government prosecutors said Odeh covered up her conviction and imprisonment in Israel for terrorism when she entered the country in 1995 and applied for citizenship in 2004. Under the plea deal she will be spared prison time, but will be stripped her of her citizenship and deported. That won’t happen for several more months, though, so Odeh appeared as scheduled.

Her speech was brief, but emotional. She spoke out for, as she put it, “exposing Israel for the criminal apartheid state that it is,” and for imposing political and economic sanctions for its treatment of Palestinians. But as she talked about leaving America, which she had come to consider her home, she broke down in tears.

“Growing up,” she said, “I heard many stories of pain and bitterness from family who were forced with 750,000 other Palestinians to leave home, lands, lives, and memories they had built for generations. Now I face a similar unjust nakba, forced to leave the life and country I have built for myself for more than 20 years in the U.S. I will continue my struggle for justice for my people.” Here she broke down again and had to pause to compose herself. “I will continue … wherever I land.”

Linda Sarsour, another prominent Palestinian American activist, emphasized the need for unity among various social movements. As an example, she mentioned her fundraising campaign in February to repair the desecrated Jewish cemeteries in St. Louis and Philadelphia, which raised almost $100,000—not to mention some suspicion among a few Jewish groups.

But Sarsour explained, “Sometimes we gotta show up for someone else.”

“This is the kind of movement we need right now,” she said. “When I raised the money for the cemetery, I didn’t call and ask, ‘What are the politics of those people [in the cemetery]?’ Because I’m sure the people who desecrated that cemetery didn’t care either.”

Sarsour and other speakers pointed to what they viewed as parallels between Trump’s America and Netanyahu’s Israel, particularly similarities between America’s treatment of African-Americans and Israel’s treatment of Palestinians.

“Racists love Israel because it is carrying out their dreams to oppress Arabs and Muslims,” Judith Butler, a noted political philosopher and gender studies theorist, told the JVP audience on Friday night.

Such remarks, not to mention speakers like Odeh, lead some to attack JVP as self-hating Jews; Erdan is only the latest. But many JVP members say they have been drawn to the group because it is the one place they can openly discusses, in a specifically Jewish context, the dilemma of how Jews can be considered oppressors.

Carolyn Klaasen, a doctoral student at the Union Theological Seminary, joined JVP six years ago after a trip to Israel and Palestinian territories. “Seeing the occupation destroyed my ideals about Judaism,” she said. “I needed to rebuild my relationship with Judaism. I wish other Jews had the opportunity to hear about the realities of Palestinian lives. How Palestinians resist and live is not often talked about in the Jewish community.”

Over the weekend’s discussions and workshops, JVP members tried to figure out what they, personally, could do to support the Palestinian cause from their American base. Deadly Exchange, one of JVP’s newest projects, will target the exchange programs between American police forces and the IDF where they two groups, in the words of JVP deputy director Stefanie Fox, share “worst practices.”

“They practice torture, surveillance and spying,” she said, “which is all brought to bear against Palestinians and people of color.”

For the first time, the group also seriously discussed changing its non-stance on Zionism. Up to now, said JVP media coordinator Naomi Dann, JVP’s official policy was not to have a policy. But the presence of many anti-Zionists at the convention has made the group start to reconsider its stance.