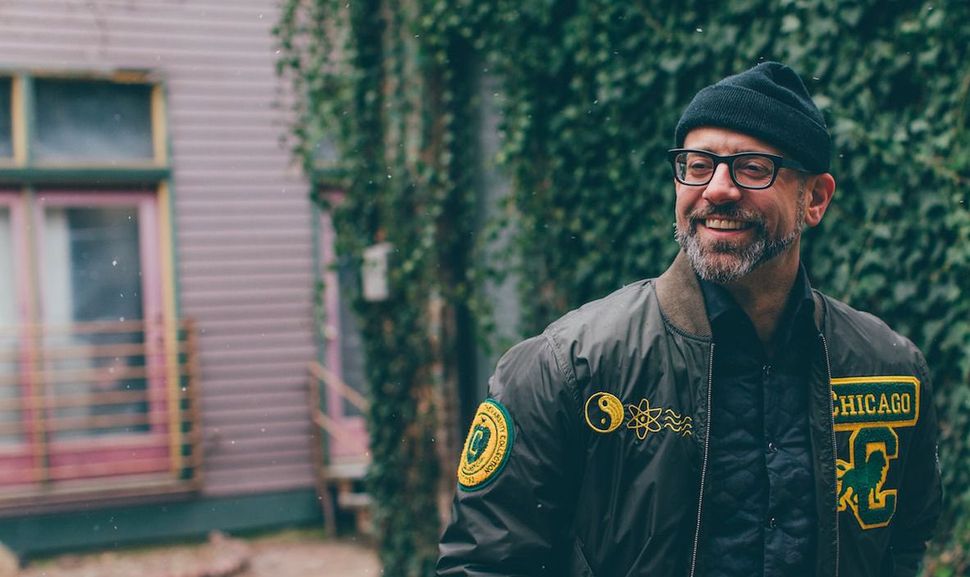 It’s been Coval’s nature to question all forms of established dogma, going back to his Hebrew school days at Temple Beth El in north suburban Northbrook. Already obsessed with hip-hop, he presented the rabbi with the lyrics to “Why is That?” by KRS-One which argued that Abraham and Moses were probably black.

The rabbi assured Coval that after his bar mitzvah, he would never again be welcome in the synagogue.

Almost three decades later, the song’s refrain, “The information we get today is just wack / But ask yourself, why is that?” could well serve as the epigraph for Coval’s new book, “A People’s History of Chicago,”. The tome tells the story of his city, starting with members of the Pottawatomie tribe who lived within the territory that now defines Chicago’s boundaries before white colonialism to the night last fall when the Cubs won the World Series.

Coval’s Chicago is a city of working people, and the heroes of his history are the city’s labor leaders and activists who fought for equality and economic justice, especially for African-Americans: people like the late 19th century anarchist Albert Parsons, the Black Panther leader Fred Hampton, the educator Margaret Burroughs and Jane Addams, who “originated in loot & leisure. got shook the world wasn’t like that for all.”

The second half of the book covers just the past 42 years, Coval’s own lifetime, and includes autobiographical poems, like “The Day Harold Died” about the death in 1987 of Harold Washington, the city’s first black mayor, and how it coincided with his own awakening about race and class. There are also poems about events he witnessed himself, like the hunger strike by mothers in Little Village who wanted better schools for their kids.

The most furious poem in the book, “Atoning for the neo-liberal in All or rahm emanuel as the Chicken on Kapporot,” was written for recitation during the haftarah service on Yom Kippur of 2015, at Tzedek Chicago, an independent social justice-centered congregation where he is a member. This was after Mayor Rahm Emanuel had closed 52 public schools and made drastic cuts in the city’s public health programs. In the poem, in language reminiscent of the Biblical book of Isaiah, Coval excoriates the mayor for what he perceives as neoliberal policies that sell out the poor and working classes. He demands that Emanuel atone for his many sins. It begins:

“you are the first jewish mayor of Chicago, but you have not lit one yahrtzeit candle / for people murdered by the police.”

After he finished reading, said Tzedek’s rabbi, Brant Rosen, the congregation applauded. “Kevin gets away with this stuff,” said Rosen. “People respect him even if they don’t agree with his politics.”

For Coval, history, poetry, hip-hop, and Judaism are all tied inextricably together. As a kid in the 80s, he was initially attracted to hip-hop by the language or, as he described it, “the delight and pleasure of beginning to hear the syntax, the assonance, the musicality of language, brought to life in the speakers, headphones, boombox.” But the lyrics also introduced him to descriptions of working-class neighborhoods that weren’t so different from his own life. Northbrook, the suburb where he grew up, was fairly affluent. But his own family was not; both his parents struggled to get by, especially after they divorced. They lived on the outskirts of the community and moved frequently so Coval and his brother could stay within the school system.

It didn’t seem weird to him that a white Jewish boy, especially one growing up in what he now describes as a state of turmoil, would feel an affinity to hip-hop. “Hip-hop is from an African diasporic tradition,” he explained. “Jews are also a diasporic people.” His father and his late aunt Joyce Sloane, a producer at Second City, were relentless storytellers who would sit at the kitchen table reciting the same family history over and over again. As Coval worked to memorize his Bar Mitzvah haftarah, their stories mixed with tales told by rappers like Chuck-D and KRS-One. They created, in his mind, a sort of high-end remix of rhythm and language and Jewishness and working-class politics.

Coval hated school, but on his own, he read books like Howard Zinn’s “A People’s History of the United States” and Lerone Bennett Jr’s “Before the Mayflower: A History of Black America.” Hip-hop also taught him the habits of a student of history: he spent a lot of time digging through record crates and reading liner notes to figure out what samples were being used. He began to wrestle in his own work with the notion that Jews themselves were sometimes oppressors. In “on how jews become white,” a poem in his 2013 collection, “Schtick,” he tells the story of the 1908 Springfield, Illinois, race riots in which Abraham Raymer, a Jew, was accused of participating in the lynching of William Donnegan, an African-American—the one person in town Raymer believed was lower on the social ladder than he was:

“abraham raymer / the yiddisher lyncher / the jury of peers / the acquitted / the freshly born / and baptized / american / white man.”

The solution to this dilemma, Coval decided, was that whites shouldn’t be allies but, in the words of his friend, the poet and organizer Mahogany Brown, accomplices, which implies that they’re not just passive observers, they’re active participants in the work of creating a just society and have something to lose.

In his early 20s, Coval became part of a group of young poets and activists who hung around the University of Illinois-Chicago. There he met several activists and writers who would become mentors, including Bill Ayers and Haki Madhubuti, whose decision to change his name from Don L. Lee in 1972 is memorialized in “A People’s History of Chicago.” He also met Studs Terkel, the great oral historian, whose books Coval compares in “A People’s History” to mixtapes.

From Terkel, Coval learned the importance of listening, especially in the classroom after he began teaching, in 1996. Coval uses his classroom as a sort of laboratory where he brings in words and ideas for his students to, as he put it, “nerd out” as inspiration for their own stories. “He’s the kind of teacher who says to every student, ‘I see you, I hear you, I recognize you,’” says Ayers. “It’s that recognition that allows the flowering of the talent that’s within.”

The list of his former students includes dozens of talented young Chicagoans, including Chance the Rapper (who wrote the introduction to “A People’s History of Chicago”), singer Jamila Woods, poet and activist Malcolm London and sociologist Eve Ewing. Many of them participated in Louder Than a Bomb, the youth poetry project he created with Anna West in 2001

“Young people are in the midst of a renaissance,” Coval said. “They’re going to change way planet hears and interacts.”

“A People’s History of Chicago” seemed like a natural project for a poet-listener like Coval. “I write about and think about Chicago all the time,” he said. Initially he was working on a book about gentrification, inspired by his parents’ own move from the city to the suburbs as the neighborhood they lived in, mostly working-class black and Puerto Rican New Town, began its transformation into white and affluent Lakeview. But he began to see a wider pattern of the city’s long history of displacing its poorer and less powerful residents in the name of urban development. One of his former students, the poet Nate Marshall, encouraged him to follow that line of thought back through the 500 years of Chicago’s history.

Coval wrote more than 150 poems and, with Marshall’s help, edited the collection down to 77. It’s a significant number for Chicagoans because the city has 77 officially designated neighborhoods. The book’s official release date took place April 11. But on March 4, he introduced the book publicly in honor of Chicago’s 184th birthday, in an event at the Harold Washington Library downtown. The line of people waiting to get in extended around the block. Between now and next March 4, he’s planning to do 180 readings in every part of the city.

“There’s going to be a workshop component,” he said. “I want to build archive of voices who contribute their own narratives to the much larger stories of what it means to be a Chicagoan now.”

For Coval, that meaning includes the right to be critical of the city he loves—not unlike being a Jew. (“Abbie Hoffman said that a Jew is the person who stands up and says the emperor has no clothes,” said Rosen. “Kevin is definitely of that mindset.”) But he’s an optimist. “People should not believe the hype of what people say about Chicago,” he said. “Right now, we’re in the cross hairs and nexus of a conversation that I think has to do with a criminalized narrative of communities of color. There’s an iniquity on ground that we are changing. Things are in flux, but a lot of people think we need to change here for better and safer.”

As he wrote in the book’s final poem, “Chicago Has My Heart”:

“we rise, Chicago / this body / politic will rise / our fire will burn / again.”