President Trump’s top counter-terrorism aide, Sebastian Gorka, has offered varied and sometimes contradictory accounts of his association with the Vitézi Rend, a far-right Hungarian group that is on a U.S. State Department “watch list.”

Now, new research by the Forward has revealed that Gorka’s use of a special lower-case “v.” insignia in his signature, which the Vitézi Rend allows only sworn members to use, goes back much further than previously known.

In articles he published in 1998, when he was 28 years old, and then in 1999, Gorka signed his name “Sebestyén L. v. Gorka,” using the Hungarian honorific abbreviation for “Vitez,” which is reserved exclusively for sworn members of the Vitézi Rend order.

The articles predated the death of Gorka’s father by several years, making his assertion that he simply inherited the title from his father, as he has claimed, seemingly impossible.

Gorka, who immigrated to America from Hungary nine years before he landed in the White House, has given contradictory information about his ties to the group, which the State Department labeled as having been “under the direction of the Nazi Government of Germany” during World War II. In one interview, he denied he was a member of one of the organization’s two modern-day incarnations, known as the Historical Vitézi Rend. At other times, he said he merely “inherited the title of Vitez through the merits of my father.”

“I never swore allegiance formally,” he told the British newspaper the Telegraph. 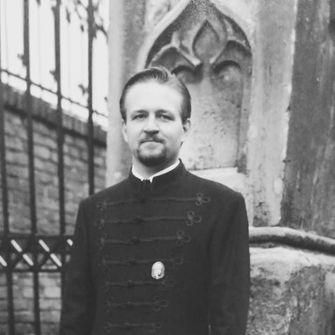 The question is not academic; Gorka would have been required to reveal his membership in the far-right group both when he applied to enter the United States in 2008 and when he became a naturalized U.S. citizen in 2012. He has declined to respond to questions about whether he did so.

He has also not responded to questions about his 2007 endorsement, while leading a political party in Hungary, of an extreme right-wing paramilitary militia led by anti-Semites. The militia was later banned by court orders for seeking to promote an “essentially racist” legal order. An investigation by the Forward also found that Gorka wrote regularly for a well-known anti-Semitic paper while active in Hungary, and that he co-founded his political party with prominent former members of Jobbik, a party with a long record of anti-Semitism and racism against Hungary’s Roma minority.

An Associated Press report in February, citing “current and former senior officials,” stated that Gorka has yet to be granted the security clearances ordinarily required for him to perform his job as counter-terrorism adviser to the president. The White House has so far declined to respond to questions from the Forward.

Use of the lower-case “v.” in one’s name, signaling membership in the Vitézi Rend, is not an option for just anyone. “Of course, only after the oath,” György Kerekes, a current member of the Historical Vitézi Rend, told the Forward when asked if anyone may use the initial “v.” without going through the group’s application process and its elaborate swearing-in ceremony.

Gorka subsequently used the “v.” in his name when giving sworn testimony to the House Armed Services Committee in 2011 and on his doctoral thesis in Hungary in 2008 — both years after his father, Paul Gorka, had died.

Then again, in a different account, given in March to Liel Leibovitz, a staff writer for Tablet, Gorka said simply, with no mention of an inheritance, “I have occasionally worn my father’s medal and used the ‘v.’ initial to honor his struggle against totalitarianism.”

Gorka’s ambiguous disavowal conflicts with assertions from the leaders of the Historical Vitezi Rend, who have been clear about the matter: Gorka, those leaders told the Forward, and later NBC News, is a sworn member of their group, which was founded by Admiral Miklos Horthy, Hungary’s wartime leader. Horthy, a self-declared anti-Semite who passed anti-Jewish laws prior to the war and collaborated with Hitler during the conflict, rewarded members of the Vitézi Rend with land confiscated from Hungarian Jews whom he turned over to Hitler. Hundreds of thousands of Jews were deported to concentration camps under his rule.

Affiliation in the modern group, current Vitézi leaders say, is granted only through an oath of lifelong loyalty to the Hungarian nation that new members must give at a formal initiation ceremony.