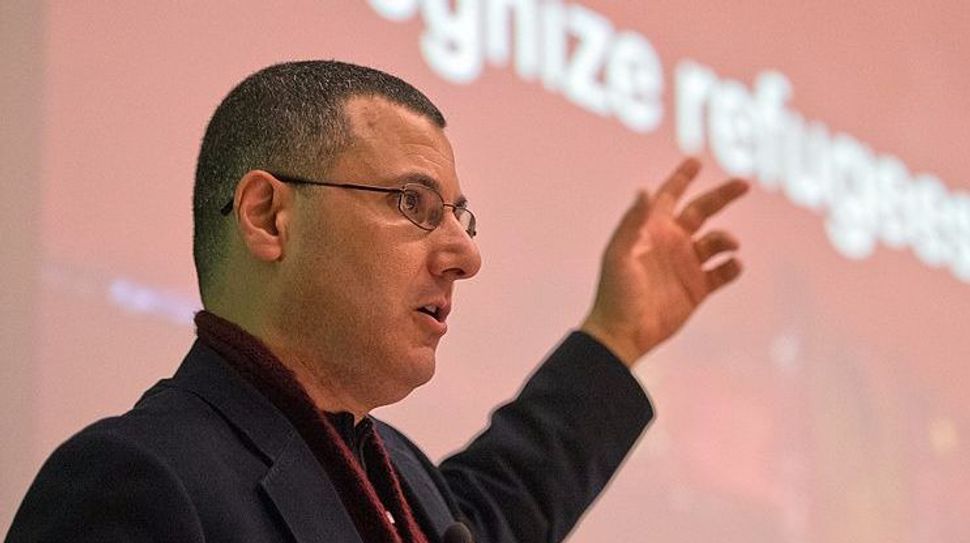 Barghouti was in the United States only because an Israeli judge lifted the travel ban on him last week while he faces an investigation into suspicions of tax evasion. He was allowed to accept a peace prize at Yale University on Sunday. While here, he added two events in New York City with the pro-BDS group Jewish Voice for Peace.

At the Columbia University event, Barghouti ran through a list of BDS accomplishments. He included universities whose student governments have adopted pro-BDS resolutions – although no American university has divested from any company that does business in Israel – and the fact that just a few of the NFL football players who were supposed to go to Israel on a government-sponsored “goodwill” trip in February actually did so.

Barghouti refused to speak with Haaretz at the event, responding to an interview request by writing, “I do not do interviews with the main Israeli media.”

He was given a standing ovation Monday as soon as he walked to the Palestinian flag-draped podium in the crowded hall at Barnard – the women’s college at Columbia University. Pro-Israel students stood at the back of the hall holding signs saying “Lies!” and “Anti-Semitism.”

“The Road to Freedom: A Panel Discussion with Omar Barghouti” also featured JVP Executive Director Rebecca Vilkomerson and Premilla Nadasen, a Barnard history professor who was born in South Africa when it was an apartheid state. The speakers sat at a table fronted by a large “Boycott Israel” banner.

Barghouti said he dedicated his award “to every BDS activist,” and that he donated his prize money to five different organizations: JVP; the U.S. affiliate of the international BDS movement; the national organization for Students for Justice in Palestine; the Movement for Black Lives (whose platform last year accused Israel of “genocide” against Palestinians); and Sabeel, a Palestinian Christian group.

Vilkomerson spoke about Israel advocates’ recent focus on getting legislation passed at the municipal, state and federal levels that would prohibit governments from working with organizations that ascribe to BDS, and in some cases include anti-Israel views in the official definition of anti-Semitism.

“They understand they are losing the grassroots,” she said. “These laws are like shutting the barn door after the horse has bolted. It is just too late.”

Feith also noted Barghouti neglected to mention that BDS resolutions lost student government votes at several colleges this semester. Also unmentioned was that on April 2, the Columbia College Student Council decided – by a 28-5 vote – not to hold a college-wide referendum on BDS.

In his talk, Barghouti said the BDS platform is simple and focused on human rights. It calls for Israel to end “its occupation and colonization of all Arab lands and dismantle the wall,” referring to the West Bank separation barrier; to recognize “the fundamental rights of the Arab-Palestinian citizens of Israel to full equality”; and to “respect, protect and promote the rights of Palestinian refugees to return to their homes and properties.”