Jewish students at the University of Wisconsin-Madison are up in arms after the student government passed a resolution on Wednesday blaming Israel for police violence against African-Americans and calling for divestment from companies aiding Israel’s occupation of the West Bank, a move that was allegedly reached through under- handed tactic0 s0.

“They have trampled on and harassed us for more than a month,” said Ariela Rivkin, the only Jewish member of the university’s student government. “They have worked very hard to exclude Jewish students from this process.”

The controversy began in late March, when members of the student government – at the urging of the campus affiliate of Students for Justice in Palestine – proposed a resolution calling for the university administration to divest from corporations linked to the “Military-Industrial Complex, Private Prisons, [and] Fossil Fuel Companies.”

Most of the document focused on Israel, referring to the Jewish state as an “Apartheid Regime” and tying it to the American “alt-right” – a racist movement that has targeted American Jews for special censure. It also criticized programs in which American police officer receive training in Israel, tying those activities to cases of domestic police brutality.

According to Rivkin, Jewish students succeeded in having the measure tabled, only to see a version of it resurrected at a meeting held on the second day of Passover, when many Jewish students were tending to religious obligations.

Finally, the student government passed a watered-down version of the initial resolution 24-0 with two abstentions, demanding that the UW Foundation – which controls the university’s endowment – divest from arms manufacturers it said were responsible for “lives in Palestine who continue to suffer under Israeli military occupation.”

Rivkin said the resolution’s backers made a coordinated effort to intimidate her and other members of the student government. Students arrived at the Wednesday meeting with signs bearing her name, and one singled her out as the “white elephant” in the room. 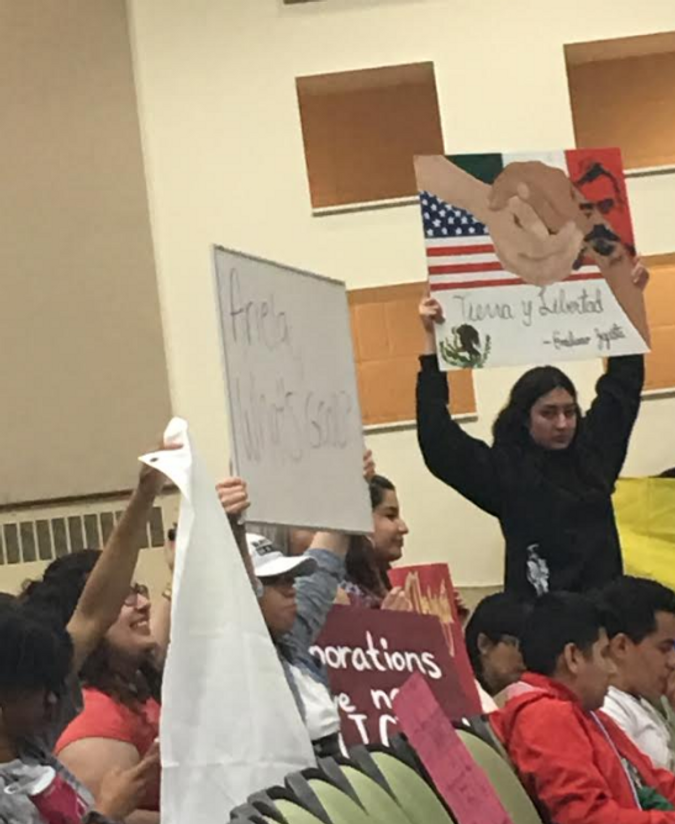 She also claimed that resolution proponents sipped out of Pepsi cans while she spoke – an attempt, she said, to link her to a recent ad for the soft-drink company that was mocked by many as racist.

According to her, these “intimidation tactics” scared members of the student government into supporting the resolution. Her claims were corroborated by photographic evidence and information from Eliana Locke, another student present at the meeting.

Following the vote, the university denounced the move and said that it would have no effect on administration policy.

“We have heard clearly from the Jewish community how targeted they feel by the actions of the last month. Chancellor [Rebecca] Blank has made clear her opposition to the concept of BDS and academic boycotts,” the university said in a statement.

The school’s Hillel condemned the resolution as an “utter sham” in a statement to the Badger Herald student newspaper.

UW-Students for Justice in Palestine did not respond to the Forward’s request for comment, but released a statement along with other sponsors of the resolution that defended their actions and called for the ouster of Chancellor Blank.

“This is not BDS,” their statement argued, claiming the resolution targeted only “complicit in human rights abuses.”

The statement also stated that the university was helping to “maintain white supremacy” by attacking the student government resolution, even as it was allegedly slower to condemn what it said were racist assaults on minorities on campus.

“Not only have our fears and struggles been undermined, but this narrative has been altered in an effort to silence us,” it continued.

Rivkin dismissed those arguments. “If it makes Jewish students feel unsafe, uncomfortable, unwanted and afraid to say they’re Zionist, then it is BDS,” she said. She is demanding an apology from the organizers of the resolution and pursuing a case against them in the student government’s judiciary branch.

The current student government will leave office on April 30, and Rivkin hopes the new one will try to strike a more inclusive note.

“This resolution pitted social justice and Israel against each other, and this was seriously damaging to Jews who want to fully engage in the campus’ progressive culture,” she told the Forward. “The next student government should focus on initiatives that improve the lives of students, and not on loud discourse that sounds good but doesn’t take into account the feelings of the large and diverse campus we represent.”