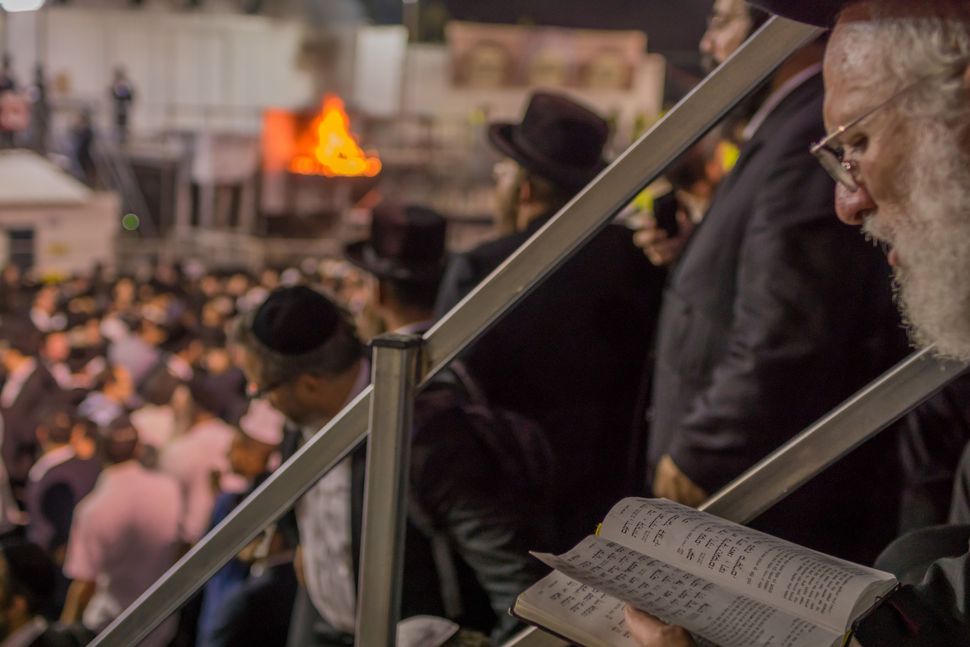 Editor’s note: Dozens of ultra-Orthodox Jews were killed in a stampede on April 29, 2021, while celebrating Lag B’Omer in the city of Meron in northern Israel. As details of the horrific incident are still unfolding, we are republishing this 2017 article with background on the festival.

What is Lag B’Omer?

Lag B’Omer is one of those little-known Jewish holidays, the kind that passes unnoticed among most American Jews. Perhaps they would be more interested if they knew it involved barbecue — and a couple of really good stories. Widely celebrated in Israel, it’s known as a family-focused celebration filled with grilled meats and carob cakes and bows and arrows.

So what exactly is Lag B’Omer? It’s a holiday with a numerical name: “Lag” is a hebrew acronym of the letters “lamud” and “gimmel” which equals 33, because the holiday falls on the 33rd day of the Omer.

The Omer, which means, “a sheaf,” referencing the grain that was brought as an offering to God at the Jewish Temple, is a time of mourning. During this time, Orthodox Jews don’t shave, don’t listen to music and don’t get married. It begins on the second day of Passover and ends on Shavuot, when the Jews accepted the Torah at Mount Sinai.

One reason for the holiday has to do with the teaching that the manna that sustained the Jews as they wandered in the desert for 40 years began falling on the 18th of the hebrew month of Iyar, which coincides with the 33rd day of the Omer.

Origins in the Roman period

But the reason for Lag B’Omer is mainly derived from two Talmudic stories that take place during the Roman period. The first is the story of Rabbi Akiva and his 24,000 students. Rabbi Akiva was a famous tanna, a man who went from being an illiterate farm boy to a venerable Torah scholar with thousands of students. Because of his prestige, his students became cocky and competitive, and they began to quarrel.

As a result, God sent a plague that struck down Rabbi Akiva’s students. It was only on the 33rd day that it stopped, and all was forgiven. And so Lag B’Omer is a day of joy and celebration.

The second story behind this holiday is the story of Rabbi Shimon Bar Yochai and the cave. Rabbi Shimon, one of Rabbi Akiva’s students, was forced to flee from the Romans after Bar Kochba’s defeat. He fled to a cave with his son Elazar. Miraculously, the story goes, a carob tree sprung up out of the blue next to a stream, which nourished the pair as they spent every day learning and praying for the next 12 years.

Why do people gather at Mount Meron?

Before he died, Rabbi Shimon told his disciples that the day of his death should be a day of joy. And so Lag B’Omer is a celebration commemorating the death of Rabbi Shimon Bar Yochai. In Israel, many Jews make the pilgrimage to his tomb in Meron, which is located near Safed.

There, Jews light bonfires, eat barbecued meats from freshly slaughtered animals and sing kabbalistic hymns to honor the light that Rabbi Shimon brought into the world through his kabbalistic teachings. Some Hasidic Jews also bring their 3-year-old sons to have their hair cut for the first time, in what is called an upsherin. Many people also eat carob in honor of Rabbi Shimon’s 12 years hiding in a cave.

What both these stories teach us is that Judaism is not just a religion that is about serving God, it’s about the quality of one’s relationships. You cannot turn Torah learning into a battlefield, you cannot remove yourself from humanity in your attempt to get closer to God. Godliness can only be achieved by being a decent person to others.

And that’s why Lag B’Omer is a holiday that is about family, about reaffirming our dedication to our relationships.