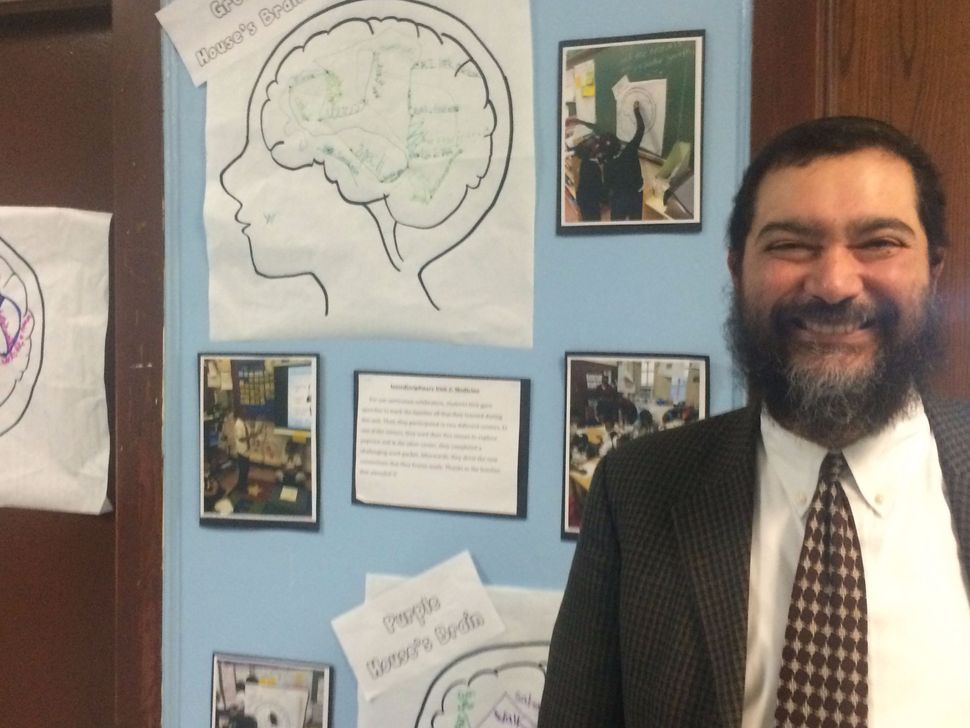 Students in the overwhelmingly black and Hispanic school district of Hempstead, New York, on Long Island, may be forgiven this fall if it takes them awhile to get used to their new superintendent — a Hasidic Jew who wears a dark coat and hat, sports a beard and has a yarmulke made of velvet.

Shimon Waronker, a 48-year-old veteran educator from New York City, has been appointed superintendent of a school district where few can remember the last time the schools’ chief was a white person, never mind a man who is a member of the Chabad-Lubavitch sect.

The school district in central Nassau County is 99% black and Latino. It is also one of the most troubled in New York state, with a graduation rate of about 40%. Some 68% of the students are considered economically disadvantaged, and 30% are not proficient in English.

In 2015, the district’s Hempstead High School and Alverta B. Gray Schultz Middle School were placed under state receivership. The state can appoint an independent operator to control the schools if they do not show improvement. There are also frequent problems with gangs and drugs.

And even before Waronker takes over there is dissent. At a stormy board meeting in late April, he was appointed superintendent, but by only a 3–2 margin. Board opponents complained that he did not meet with the community before the vote, and that he has no experience running a large school district. Hempstead has about 8,400 students and is one of the biggest in the state. Waronker is to be paid $265,000 annually, and he will have a four-year contract.

Born in Chile, Waronker came to America speaking only Spanish when he was 11. He settled in Rockville, Maryland, with two siblings and his mother, Ruth Waronker (his father had already died). In the United States, he earned a bachelor’s degree at the University of Maryland at College Park, served in the Army as an intelligence officer, and later earned a doctorate in education from Harvard.

Over the past few years, Waronker has built a reputation in the education world for turning bad schools into better ones. He is best known for the changes he brought to Jordan L. Mott Junior High School 22 in the South Bronx, once rated one of the 12 most dangerous schools in New York City. Reading and math scores were in the single digits when he came in 2004. They were improved when he left four years later, to the high 30s.

In Hempstead last year, the school board, frustrated with what it saw as years of barely any academic progress, hired an executive search firm to look nationwide for a new superintendent. Waronker was chosen from a field of about 40 candidates. He was eager to accept. Asked the reason for his eagerness, during a May 17 interview with the Forward, he paused for nearly a full moment.

“I believe very strongly the children in Hempstead need opportunities,” he said in a small office at the New American Academy, in Brooklyn, one of four charter schools he has started in the past few years. He oversees those schools and is now also dean of The Jewish Academy, in Commack, New York, a post he said he will be giving up to devote his full time to Hempstead.

“I’ve had experience turning around schools like this,” Waronker said, referring to the Hempstead district. “I’ve dealt with the gangs, the low scores. I think I bring a unique skill set.”

Waronker offered an example. On his very first day at JHS 22, he was confronted by the spectacle of a police officer in a hallway arresting a student for assault. “I can’t [say] I wasn’t scared,” he said. “It was really, really a rough place.” Waronker, only 5 feet 8 inches tall, with an average build, said he had to stare down angry and sometimes threatening students and parents. His life has been threatened more than once.

He employed some of the tactics he learned in Army intelligence school. He identified the gang leaders and created a student congress, with those leaders at the head; he brought in the New York Police Department’s anti-gang squad for talks with students; he sent five gang leaders he could not turn around to other schools. He divided the school into small academies so that groups of teachers could concentrate on manageable clusters of students.

Whether the same tactics can work in Hempstead, a suburban school district with urban troubles, remains to be seen.

Maribel Toure, the school board’s president, said Waronker was hired “because of his experience” dealing with failing schools. “We also saw a man with new ideas,” she said, pointing to the academies he formed at JHS 22.

Is Toure concerned that Waronker’s religious orientation might make it difficult for him to oversee the district? “We didn’t hire somebody to teach religion,” she said. “We hired someone to fix our schools.” He will take over July 1.

But board member LaMont Johnson said he was troubled that Waronker did not meet with community members.

“He assumed there would be opposition,” Johnson said. Johnson had another complaint: Waronker lacks experience running an entire school district. But Johnson said he plans to stand behind Waronker. “I hope he does well,” said Johnson, a life-long district resident and a onetime Hempstead village police officer. “His success is the district’s success.”

Waronker said it was up to the board, not the community, to decide on a new superintendent. He said he plans to meet with parents, teachers and students this summer. He also said he has dealt with large student bodies, if not entire districts.

Joel Klein, a former New York City schools chancellor, is among Waronker’s supporters. They met in the early 2000s, when Waronker trained at a leadership academy that then mayor Michael Bloomberg created in order to prepare promising educators to become school principals.

“He impressed me” immediately, Klein said. “He had endless eagerness to learn. He also showed humility and compassion.”

Those are traits Waronker said he learned from his mother, who converted to Judaism. Waronker also converted, at the age of 6. He became Hasidic, he said, in his mid-20s, during his Army days. Having had a friend who was Hasidic, Waronker said he came to like “the joy” with which members of the Chabad worshipped, and the fact that the Chabad encouraged large families. He is a father of six.

“Either life has meaning or it doesn’t,” he said of his religious journey. “A lot of people go soul-searching. I did, too. I decided I believed in one God.”

Frederick Brewington, an attorney in Hempstead and a longtime civil-rights leader on Long Island, said he is hopeful that Waronker will be able to reinvigorate the district’s schools.

“It doesn’t matter that he is different,” Brewington said. “He’s a leader in a district that needs a leader. He’s come into a situation that has become old and stale.” He noted that Waronker could add another level of diversity to the district: “We have a chance to become a global village. What a great opportunity.”