Montana Republican congressional candidate Greg Gianforte was charged with assault on Wednesday after he “body slammed” a Jewish reporter on the eve of a special election to fill the state’s lone seat in the House of Representatives.

The Gallatin County sheriff’s office issued the citation for misdemeanor assault hours after Ben Jacobs, a political correspondent for the Guardian newspaper, said in a Twitter post and in a television interview that Gianforte “body slammed” him, breaking his eyeglasses.

The incident was caught on audio tape in which Gianforte shouts at Jacobs before an apparent attack.

“Get the hell out of here,” said Gianforte, who is locked in a tight race today with Democrat Rob Quist. The contest is seen as a bellwether of President Trump’s plummeting national support.

“You just body slammed me,” Jacobs says on the tape. “I’d like to call the police.”

Listen to me get body slammed in Montana https://t.co/I8hAUsmuWw

The incident, which caps a campaign seen as a possible bellwether for next year’s mid-term congressional races, took place at an event in Bozeman, where Jacobs sought to question Gianforte about healthcare, according to an audio tape captured by Jacobs and played on cable television networks MSNBC and CNN.

Fox News Channel reporter Alicia Acuna, who said she and her crew were in the room preparing to interview Gianforte, wrote that she saw Gianforte as he “grabbed Jacobs by the neck with both hands and slammed him to the ground.”

Acuna, her field producer and photographer then “watched in disbelief as Gianforte began punching (Jacobs) as he moved to top of the reporter.”

Gianforte’s campaign did not deny Jacobs’ allegation but countered in its own statement that Jacobs instigated an altercation by barging into the candidate’s office, shoved a recording device in his face “and began asking badgering questions.” 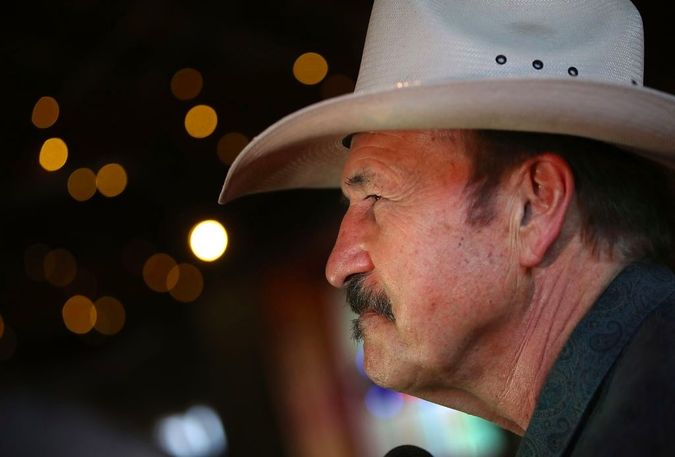 “After asking Jacobs to lower the recorder, Jacobs declined,” campaign spokesman Shane Scanlon wrote. “Greg then attempted to grab the phone that was pushed in his face. Jacobs grabbed Greg’s wrist and spun away from Greg, pushing them both to the ground.”

“It’s unfortunate that this aggressive behavior from a liberal journalist created this scene at our campaign volunteer BBQ,” the statement said.

Acuna disputed that Jacobs was the aggressor.

“At no point did any of us who witnessed this assault see Jacobs show any form of physical aggression toward Gianforte,” Acuna wrote in her account on the Fox News website.

Interviewed later on MSNBC, Jacobs said he retreated to a parking lot after the confrontation to call his editor and the police. He said he was speaking to MSNBC from a hospital where he was getting his elbow X-rayed.

The citation was issued after authorities conducted several interviews and investigated the incident, Sheriff Brian Gootkin said in a statement.

Gianforte has until June 7 to appear in a county court. He faces a $500 fine and six months in jail if convicted, according to Gootkin.

In Jacobs’ audio tape of the incident, Gianforte is heard shouting: “I’m sick and tired of you guys. The last guy who came here, you did the same thing.”

According to the tape, the confrontation began as Jacobs tried to ask Gianforte if he supported a Republican healthcare overhaul bill after the Congressional Budget Office found the measure would cost 23 million Americans their medical insurance coverage by 2026.

Another reporter, Alexis Levinson of BuzzFeed News, who was just outside the office, said on Twitter she saw Jacobs’ “feet fly in the air as he hit the floor” amid yelling and commotion.

Gianforte later huddled behind closed doors with an aide before leaving the event by car, she said.

Tech executive Gianforte is running against Democrat Rob Quist, a banjo-playing political novice who hopes to pull off a surprise victory in the Republican-leaning state.

A victory for Quist could signal trouble ahead for President Donald Trump and his fellow Republicans as they defend their 24-seat House majority in the 2018 mid-term elections.

Quist and Gianforte are vying for the seat vacated when Trump, who carried Montana by more than 20 percentage points, named Ryan Zinke as U.S. interior secretary.

Republicans have held the seat for two decades and Gianforte was still the favorite. However, both sides say the race was tightening as Quist focused on criticism of Republican efforts to repeal and replace former Democratic President Barack Obama’s signature healthcare law, the Affordable Care Act, known as Obamacare.—Reuters