This Firebrand African Leader Has A Surprising Message: ‘I Am A Jew’ 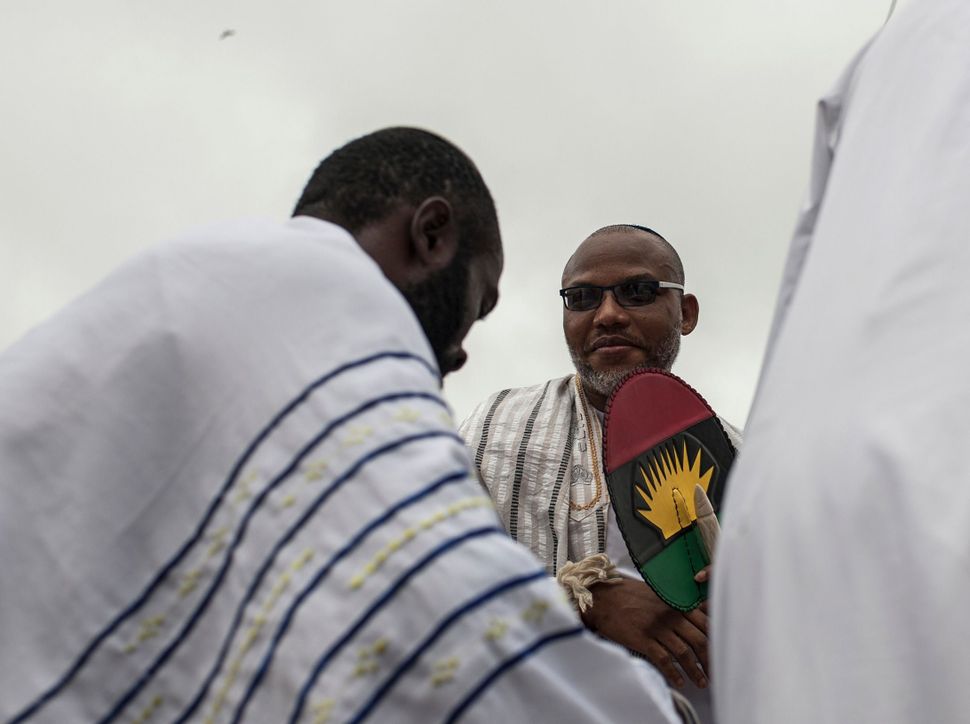 After spending year and a half imprisoned by the Nigerian government, the populist leader was finally free and surrounded by his supporters. He wore a long gown with a prayer shawl draped over his shoulders. Raising his hands, he greeted the crowd with one Hebrew word: “Shalom.”

Is one of Nigeria’s most famous political activists a Jew?

It’s complicated. He says so, at least.

Nnamdi Kanu, leader of the group Indigenous People of Biafra, calls himself a Jew who “believes in Judaism.” He urges his followers to obey the Ten Commandments and to pray to Yahweh, a Hebrew rendition of God’s name. He appears to be affiliated with a Hebrew-styled, Jesus Christ-oriented congregation in southeast Nigeria. 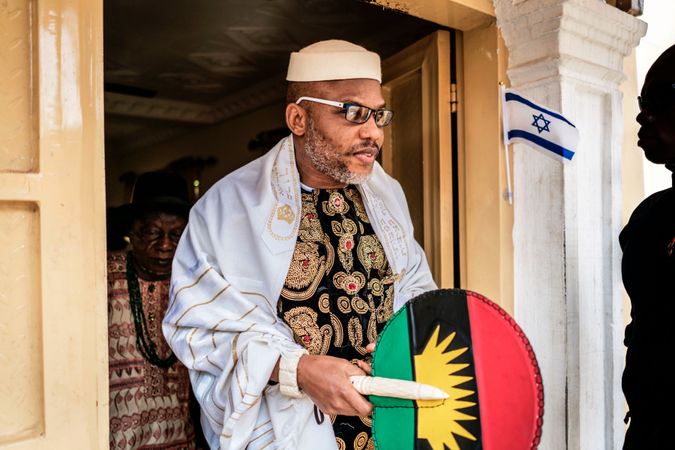 Kanu is the charismatic leader of a group calling for an independent state called Biafra, in the south of the country — in what would be a sovereign nation for the Igbo, one of the country’s largest ethnic groups.

“I was born to restore Biafra,” he said to a cheering crowd in late May. “I say Biafra or death.”

Last month marked 50 years since the brutal Biafran Civil War ravaged southern Nigeria. More than 1 million of the Igbo died in a failed bid for independence. Tensions are simmering again as Kanu and his group are once more calling for independence — and Kanu’s embrace of Judaism is now part of his platform.

In calling himself a Jew, Kanu is not alone among the Igbo. While most of the 34 million Igbo are Christian, there is a widespread belief among the Igbo that they are the genealogical descendants of the biblical Israelites. Most are staunch supporters of the State of Israel — and see in Zionism a model for their own national movement. In more recent decades, Igbo have been adopting Jewish rituals and belief into church services. Some have also formally converted.

Now, Kanu, the most high-profile figure in what is potentially an explosive political movement, is proclaiming himself a Jew.

“He is the most popular Igbo man today,” said Remy Ilona, a Nigerian lawyer and the author of the 2014 book “The Igbos and Israel.” “And now he is returning to or adopting Judaism.” 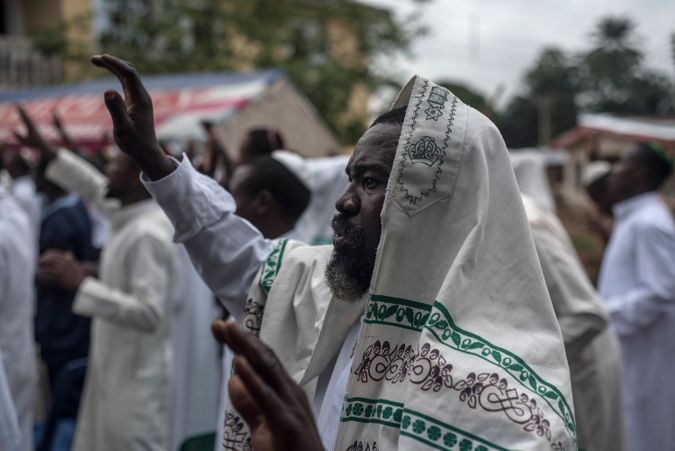 Members of the IPOB and of the Yahweh Yahshua Synagogue celebrate Shabbat outside the house of the movement’s leader Nnamdi Kanu on May 27, 2017. Image by Getty Images

Who exactly is Kanu? He has received a flurry of international press in recent days, but few have noted the deeply spiritual element of his leadership.

He was born and raised in Nigeria’s southeast, but only while living in Britain did he come to prominence as a nationalist leader. In 2009 he started Radio Biafra, a London station that called for an independent state for the Igbo people.

In some of his broadcasts, he seemed to urge Biafrans to take up arms against the Nigerian state. “We need guns and we need bullets,” he said in one such address, the BBC reported.

While IPOB maintains that this “was a metaphor,” it was comments like this that led to Kanu’s government detention.

In October 2015, after arriving in Nigeria for a visit, he was arrested in a Lagos hotel and charged with “criminal conspiracy, intimidation and membership [in] an illegal organization.”

Detained for months by the Nigerian government, his celebrity only grew.

These “strange men” said they were “Jews from the South-East region of Nigeria,” the website Naij.com wrote. “The men… prayed for him outside the court premises.”

Then Kanu himself began dressing like these “strange men.” “Nnamdi Kanu seems to be having a swell time behind bars as he glows in a magnificent Jewish cloth,” the Nigerian website Tori.ng wrote.

Other observers were skeptical of Kanu’s transformation.

“It is not clear if Kanu has converted to Judaism while in detention since October 2015,” one writer posted on the website Naijiant.com. “Kanu’s choice of clothing may be an attempt to secure Jewish or Israeli support for his cause. But it is not quite clear if this would work.”

This spring, after a year and a half of detention, Kanu and the court finally came to a bail agreement. Noting Kanu’s religious affiliation, the judge requested that Kanu present at his bail hearing a “highly respected and recognized Jewish leader.”

And one showed up.

On April 29, Vanguard ran a front-page story about how a “Jewish chief high priest,” named Immanuel-El Shalom Oka-Ben appeared in court, helping to secure Kanu’s release. “By Yahweh’s grace I believe he will be released as soon as possible because nothing is more than our creator in heaven,” the priest told the reporter.

Finally out of imprisonment, Kanu traveled the country. Photos of Kanu, now widely seen as an almost Messiah-like hero for the Igbo, circulated widely online. He always wore a prayer shawl or a head covering.

At the end of last month he hosted a large Shabbat service outside his family’s compound, alongside a large congregation called the Yahweh Yahshua Synagogue. “Yahshua” is a Hebrew rendering of Jesus. A video of the service was streamed online, picturing throngs clad in prayer shawls.

Kanu addressed the crowd and made it clear that his mission was both political and spiritual.

“If you obey the Ten Commandments of our Lord and our God,” Kanu said. “Biafra will come.”

The worship of the “God of Israel,” Kanu said, is central to his vision of a free Biafra. “We are going to worship in temples and synagogues,” he said.

Kanu said that this was the first observance of Shabbat in his family’s compound, and a meaningful moment.

“My joy knows no bounds, because in prison I used to dream about this, used to dream of keeping Shabbat, and today Shabbat has been kept in my house,” Kanu said.

While the day was a celebration, many worried that it would lead to Kanu’s imprisonment again — because he was once again calling openly for Biafran independence and speaking in front of a large crowd. One condition of his release was that he would not be in the company of more than 10 people.

Kanu’s lawyer defended his client’s address to the congregation.

“Remember that Kanu is a Jew,” the lawyer told a local reporter, framing it as a matter of religious freedom. “The court, for example, cannot say that Kanu should not go to church.”

This Firebrand African Leader Has A Surprising Message: ‘I Am A Jew’