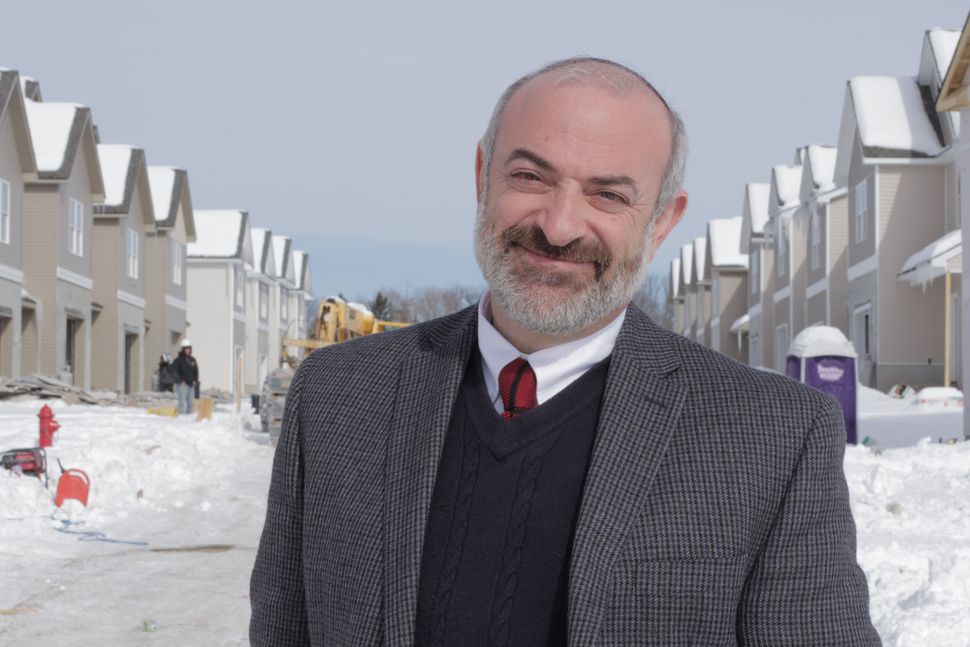 In his years-long battle to build thousands of homes for Orthodox Jews in the small upstate New York village of Bloomingburg, developer Shalom Lamm often cast himself as a victim of anti-Semitism.

On Tuesday, Lamm took on a new role: admitted felon.

Lamm, son of one of Modern Orthodoxy’s most prominent rabbinic leaders, pled guilty in federal court in White Plains to a single count of conspiracy to corrupt the electoral process. The charge, which stems from Lamm’s 2014 effort to sign up ineligible voters in order to elect a more friendly village government, carries a maximum sentence of five years in prison.

It’s not clear what Lamm’s guilty plea will mean for his project in Bloomingburg, where construction is currently ongoing, and where new residents continue to move in. Local opponents of the development project, who made voter fraud allegations for years as they waited for federal officials to act, are eager to consolidate their victory.

“The developers, while they pled guilty, are still active and are hurting our community,” said Bill Herrmann, supervisor of the town of Mamakating, which encompasses Bloomingburg. “Lamm and his codefendants are still building and developing projects based upon zoning approvals whose foundations are built on lies. We need to stop this.”

Chestnut Ridge under snow in 2014, left, and with construction completed in 2016. Image by Martyna Starosta / Josh Nathan-Kazis

Lamm cast himself and his project as victims of anti-Semitism even as he was in the process of conspiring to corrupt village elections. “If you’re a conspiracy theorist and you think the Jews control things and are pulling puppet strings, then this all looks like this grand conspiracy,” Lamm told the Forward in February of 2014. “It’s basic anti-Semitism. You would have to be a believer in the Protocols of the Elders of Zion to think that we could actually manipulate the world this way. It’s a complete absurdity.”

That very month, Lamm was working to get around opponents in the village government by enrolling ineligible voters to vote in village elections, according to the indictment filed against him in December. He and others created fake back-dated leases to make it seem as though the new voters lived in the village, and even put toothbrush in their purported homes to make them seem occupied.

They also offered payments and subsidies to potential ineligible voters to induce them to file illegal registrations and to vote, according to prosecutors.

“As he has now admitted, Shalom Lamm conspired to advance his real estate development project by corrupting the democratic process, specifically by falsely registering voters,” Acting Manhattan U.S. Attorney Joon H. Kim said in a statement. “The integrity of our electoral process must be inviolate at every level; our democracy depends on it.”

Holly Roche, founder of a local anti-development group called the Rural Community Coalition, said that she expected more from federal investigators. “I’m waiting for the next shoe to drop,” she said. “I’m waiting for more.”

As recently as December, Lamm seemed to be on the brink of winning an outright victory in Bloomingburg. Members of the Satmar Hasidic community, with the blessing of the Hasidic group’s spiritual leader, Grand Rabbi Zalman Leib Teitelbaum, were moving into Lamm’s Bloomingburg development in large numbers. There was a kosher grocery store and a makeshift place to pray. A Satmar school for boys was nearly ready to open.

The development had been the target of fierce local opposition since at least 2012, in part, locals say, because Lamm hid his intentions to build dense housing in the village for Orthodox families. Locals believed for years that Lamm was building a golf course community. Instead, he built Chestnut Ridge, a tightly-packed set of 396 single-family homes just outside of Bloomingburg’s tiny downtown.

Secret documents revealed in court in 2016 showed that Lamm eventually planned to build over 5,000 units of housing in the village.

A storefront on Bloomingburg’s main street in 2014, left, and late 2016. Image by Martyna Starosta / Josh Nathan-Kazis

One of the attorneys representing Lamm, Gordon Mehler, confirmed to the Forward that Lamm had pleaded guilty on Tuesday.

Lamm apologized at a Tuesday court hearing, according to a report in the Times Herald-Record. He said that the plan began as a voter registration drive, undertaken in response to anti-Hasidic bias, according to the paper.

Lamm’s sentencing is scheduled for September 28. He is the son of Norman Lamm, a revered Modern Orthodox leader who was the longtime chancellor of Yeshiva University.

“Although this happened, we look for a bright future with our neighbors in the Bloomingburg area,” Meisels said. “We also hope that this might stop all the hatred that we’ve got until now.”