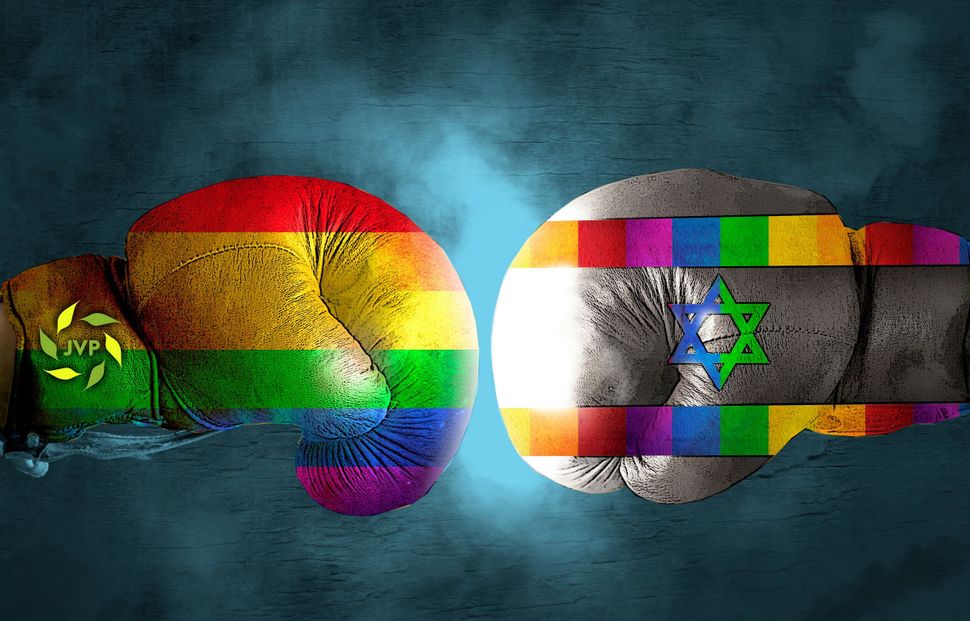 In just a few seconds, five people brought the Celebrate Israel parade to a standstill.

A block shy of the June 4 parade’s dispersal point on Manhattan’s Upper East Side, five undercover protesters broke ranks with the LGBTQ contingent and formed a picket line in front of it. One of the protesters unplugged the pedicab-mounted speakers near the front of the contingent, which had been blasting “We Are Family.” The protesters unfurled banners — “No Pride in Apartheid,” “Queer Jews for a Free Palestine” — and refused calls to step aside. After what one observer called “a very threatening round of red rover” between marchers and the protesters, police detained the protesters — queer Jewish members of Jewish Voice for Peace — and the march continued.

Despite the scene’s undeniable drama, it was simply a flashpoint in an intensifying showdown between Jewish LGBTQ organizations over Israel.

The confrontation, which lasted less than 10 minutes, according to witness accounts, laid bare the complexity of identifying as both queer and Jewish. Some queer Jews see it as their duty to defend Israel as the most gay-friendly country in the Middle East. Others feel that their minority status and personal histories of isolation motivate them to defend distressed minorities worldwide — including Palestinians. Many feel the need to shoulder both these responsibilities, and struggle with questions of how to reconcile them.

Idit Klein, executive director of Keshet, an organization that promotes full equality for LGBTQ individuals in Jewish life, notes that the growing polarization among American Jews in Israel is mirrored among LGBTQ Jews.

“Earlier on, in the ’70s and ’80s and even ’90s, given the blatant homophobia that was the status quo generally throughout most of the Jewish community, LGBTQ groups were largely concerned with basic matters of inclusion and acceptance,” Klein said. “In the current day we still certainly face blatant homophobia and transphobia, but there has been a tremendous amount of progress, and I would say there is room available to broaden their focus to encompass other issues.” 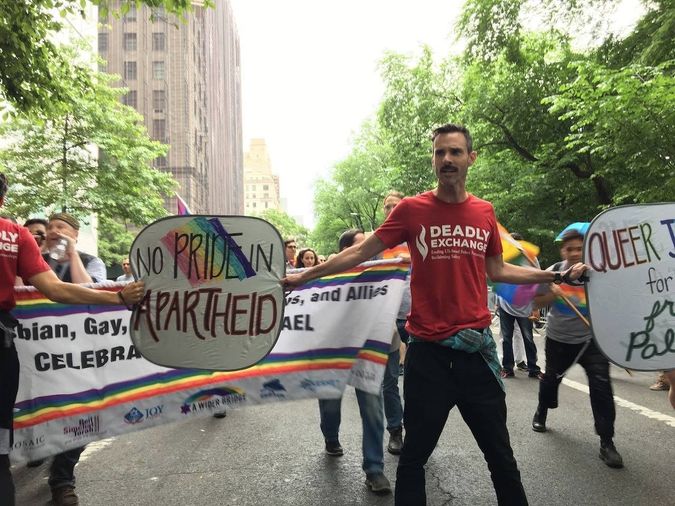 Craig Willse, a member of JVP, participating in the group’s disruption of the Celebrate Israel Parade on June 4th. Image by facebook

JVP’s protest has since become the subject of heated debate in the Jewish press, on personal blogs and across social media. While a few applauded the audacity of JVP, a pro-BDS organization whose advisory board includes Naomi Klein, Judith Butler and Noam Chomsky, most observers voiced fierce criticism of the group’s decision to target the LGBTQ contingent, citing the vulnerability of the contingent’s younger members.

“They tried to sabotage our specific marching group,” Levovitz later told the Forward. Despite this, Levovitz condemned the strong backlash against JVP, saying that the Jewish community can be “very cruel to protesters, and we are very cruel to people who don’t toe the line on things like Israel.

“The ideals of JVP are quite holy, and quite Jewish,”

Whether JVP’s ideals are queer, on the other hand, is a matter of deep disagreement. The protesters believe that their identities as queer people compel them to ally with other minority groups facing discrimination — an idea called intersectionality. Yet their counterparts claim that intersectionality ignores the minority status of Jews.

“I don’t know that being queer obligates you to take a stand for racial injustice,” said Craig Willse, a professor at a large university in Virginia who helped plan the action. “But the experience of being queer can gift you that opportunity, can help connect you to other struggles that are not your own, but in which your own liberation is bound up as well.

“You can’t separate out your identity as an [LGBTQ] Jewish person from what it means to be in a parade that is celebrating an apartheid state,” Willse added.

“On some very deep level I think one of the things that holds [LGBTQ] people together is our understanding of what it’s like to be the other,” said Arthur Slepian, the founder and executive director of A Wider Bridge, a not-for-profit that promotes LGBTQ support for Israel. “That can help inform our perspective on a great many conflicts. There’s something about the way that intersectionality is framed in some quarters that to me often sounds like, ‘All peoples in the world are entitled to self-determination.’ But there’s an asterisk attached to that statement, and that asterisk is, ‘Except for the Jews.’”

From the perspective of the protesters, their protest was justified in part because they were queer Jews confronting other queer Jews. Critics have questioned this claim, noting that though JVP has many queer members, it does not primarily serve queer people.

“I have no evidence that demonstrates to me that they have been an upstanding queer organization prior to this,” said Hannah Simpson, a transgender comedian and educator who took part in the June 4 parade. Simpson, who is a volunteer for Jewish Queer Youth, called JVP’s action an “assault.”

“The basic tenets of being a queer organization dictate that you create safe spaces and treat people with respect,” she added. “The last thing [JQY] would do would be to subject our members to physicality and abuse.”

JVP was founded in 1996 in Berkeley, California, and became a national organization in 2006. It is a mainstay organization of the boycott, divestment and sanctions movement, and has been the object of repeated criticism over its politics and actions. (The Anti-Defamation League calls JVP “the largest and most influential Jewish anti-Zionist group in the United States.”) The group has been a strong supporter of Rasmea Odeh, a convicted terrorist who participated in a 1969 bombing in Jerusalem that killed two people. Odeh recently spoke at a panel organized by JVP in Chicago.

This year was the first time JVP organized protests of the Celebrate Israel parade. The group staged seven actions in all, including protests directed at the New York Police Department and Hillel segments of the parade, and at New York City Mayor Bill de Blasio. The organization began the day with a family-oriented picnic, complete with crafts, storytelling and balloons. The idea was “to bring the Israeli occupation down to a kid-friendly level,” JVP Deputy Director Ari Wohlfeiler said. In total, seven JVP affiliated protesters were arrested during the parade, including the five who barricaded the LGBTQ contingent.

As JVP has deepened its engagement with mainstream Israel events, its reputation among many Jewish organizations has continued to sour. Last week, Jonathan Greenblatt, executive director of ADL, told the Algemeiner he was “deeply upset” that ADL had signed on to a resolution that JVP had also endorsed.

“We’re going to be a lot more careful, but we are not going to surrender the center to the extremists,” Greenblatt told the Algemeiner. “We cannot allow fringe groups to capitalize on our halo.”

Although JVP’s parade action has not increased its popularity among Jewish organizations, Ari Wohlfeiler said his organization felt anything but chastened.

“We have a renewed commitment to engaging queer Jews,” he said. “That does feel like a crystal-clear moral calling.”