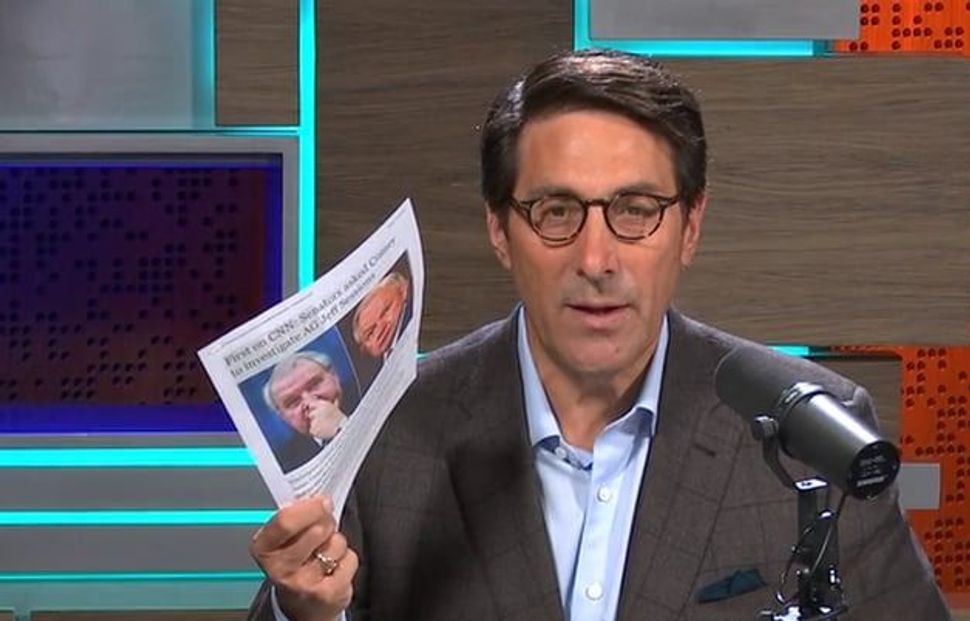 President Donald Trump welcomed an unlikely darling of the Christian right to his inner circle of defenders in mid-June.

Attorney Jay Sekulow, the newest addition to Trump’s personal legal defense team, has been accused of fraud in the past. He has put his family in charge of his organizations. And he has been instrumental in limiting access to legal abortions across the world.

As part of Trump’s legal team, Sekulow, 61, will be working under the direction of New York attorney Marc Kasowitz in the face of an independent counsel investigation into questions about possible collusion between Russia and individuals in Trump’s presidential campaign — and more recently, amid concerns about possible obstruction of justice by the president himself.

Though Kasowitz is grabbing newspaper ink with his boasts of being the toughest lawyer on Wall Street and reportedly reportedly trying to establish a legal office in the White House, Sekulow is the only lawyer on Trump’s team, as of yet, who has actual experience litigating before the Supreme Court.

Through his work as a private attorney and as chief counsel of the American Center for Law and Justice, Sekulow, who was raised Jewish but now identifies as a Messianic Jew, has led a decades-long legal campaign on behalf of evangelical and Christian right causes. That campaign began with a successful Supreme Court decision for Jews for Jesus in 1987, and has since been exported, through the international expansion of the ACLJ, to nearly every corner of the Christian world.

Sekulow made a splash early when, on a June 11 episode of ABC’s “This Week With George Stephanopoulos,” he declined to rule out the possibility of Trump firing Robert Mueller, the former FBI director who was appointed to head the special counsel investigation into Trump’s campaign. (On Monday, June 12, Christopher Ruddy, a friend of Trump’s who is the CEO and president of Newsmax Media, told the Public Broadcasting Service that Trump was “considering, perhaps, terminating the special counsel.”)

Trump lawyer Jay Sekulow “not going to speculate” whether Trump would ever fire special counsel, but “can’t imagine” issue would ever arise. pic.twitter.com/PzMuOgUC5y

But Sekulow is not new to being the center of attention. Since his early days as an Atlanta tax lawyer, Sekulow has led a life of opulence. In the early 1980s Sekulow established a successful practice in Atlanta that specialized in creating tax shelters for wealthy Atlantans. According to reports in The Atlanta Journal-Constitution, his success enabled him to spend money on expensive cars and high-end real estate.

“Very charismatic, very charming,” Jeffrey Cohen, an Atlanta lawyer who worked at Sekulow’s Atlanta law firm in the 1980s, told the Forward. “He brought in business like nobody I’ve ever seen in my life. He was extremely good at that.”

When a real estate development failed, investors sued Sekulow for fraud and securities violations. Sekulow declared bankruptcy, and over a dozen creditors and former employees filed suits against him.

Cohen sued Sekulow in 1983 for breach of contract after Sekulow failed to pay him a promised year-end $20,000 bonus. In 1991, in The Atlanta Journal-Constitution, Cohen described his experience at Sekulow’s firm as “an eight-month nightmare.” (Sekulow and his representatives did not respond to multiple requests for comments.)

“My recollection has not changed,” Cohen told the Forward. “Nothing has changed since then.”

Sekulow has continued to face scrutiny over his financial practices at the ACLJ, a not-for-profit legal advocacy initiative, and at Christian Advocates Serving Evangelism, a not-for-profit group founded by Sekulow himself in 1988.

Sekulow set up CASE following his bankruptcy trial. He remains the group’s president. CharityWatch, a not-for-profit organization that provides ratings for U.S. charities, gives CASE a C+ on its philanthropic ratings scale, in part because the only voting members on CASE’s board are Sekulow’s family. Daniel Borochoff, the president and founder of CharityWatch, told the Forward that because the ACLJ receives nearly all of its funding through CASE it rates both not-for-profit organizations based on CASE’s financial reports.

Borochoff call the composition of CASE’s board — stacked exclusively with Sekulow’s own family — “the most concerning thing.”

“That’s a bedrock principle of non-profits, that the board consists of independent people,” Borochoff said.

Sekulow’s wife, sons and brother all take salaries from either one or both of these organizations. In 2014, Sekulow’s brother Gary Sekulow received $396,008 from CASE and $238,492 from the ACLJ. An Associated Press investigation found that the Sekulow family has personally received over $33 million since 1998 via these two charities. Though Jay Sekulow does not take a salary through the ACLJ, he owns a 50% stake in a law firm that has received millions of dollars from the ACLJ for services rendered, including over $5 million in 2015. (The AP report noted that there was no mention of Sekulow’s stake in the law firm in the ACLJ’s tax documents.)

Sekulow calls himself a “reasonable fanatic,” though he’s also a converted fanatic. Born to a Reform Jewish family in Brooklyn, Sekulow had a spiritual awakening at his Baptist college in Atlanta. According to a testimony Sekulow published on jewsforjesus.org, after a friend convinced him to read Isaiah 53, Sekulow became convinced that Jesus Christ was the true Messiah.

“I kept looking for a traditional Jewish explanation that would satisfy, but found none,” he wrote. “The only plausible explanation seemed to be Jesus.”

Though he remains a stalwart voice of support for Israel, and a friend of Judaism, Sekulow has taken it upon himself to champion causes of the Christian right such as defunding Planned Parenthood and keeping “In God We Trust” on U.S. currency.

Sekulow, who served as an adviser to Republican presidential nominee Mitt Romney in 2008 and 2012, has also spent his career doggedly fighting for religious exemptions and against what he has called “[t]he penetration of secular humanism into our judicial and educational institutions.” His fight has taken him to the Supreme Court 12 times since 1987.

He has championed the rights of student groups to show religious movies on public school grounds after class, of pro-life protesters to approach people entering and leaving abortion clinics and of football players to pray before their games. In his first case before the Supreme Court he received a unanimous verdict in favor of his clients — Jews for Jesus pamphleteers who had been barred from handing out their literature in the public areas of Los Angeles’s airport.

Pat Robertson, the fiery Southern Baptist ex-minister who unsuccessfully bid for the Republican presidential nomination in 1988, founded the ACLJ in 1990 to litigate on behalf of religious Christians. (The name was designed to produce a similar acronym to ACLU, the acronym for the American Civil Liberties Union.) In 1992, Robertson hired Sekulow as the group’s chief counsel.

As Jeffrey Toobin noted in The New Yorker in 2005, Sekulow’s main innovation in his Supreme Court cases was arguing them as freedom of speech cases — what Toobin called “intellectual sorcery.” Until Sekulow, religious expression — such as organized prayer — had been largely prohibited in schools and on government property under the Establishment Clause — the separation of church and state. Though both religious freedom and freedom of speech are protected by the First Amendment, Sekulow found that arguing his cases on the basis of the latter right produced better results

“I took a lot of heat from people on my side, who thought I was abandoning the religion clauses of the First Amendment,” Sekulow told Toobin. “But I wanted to win the case.”

Since the late ’90s, the ACLJ has expanded into Europe, Russia, Africa and South America to promote its ultraconservative social agenda. Its European arm successfully stopped marriage equality campaigns in the Czech Republic and has lobbied to stop embryonic stem cell research in the European Union. In 2012 the ACLJ submitted a “friend of the court,” or amicus brief to the European Commission of Human Rights opposing a transgender woman’s right to marry. The group has supported anti-gay propaganda in Russia and legal campaigns against gay and lesbian rights in Brazil.

In 2009 the ACLJ opened offices in Zimbabwe, to “provid[e] legal training and legal research facilities to attorneys throughout the country.” Jordan Sekulow, Jay Sekulow’s son and the co-director of CASE, met with the Zimbabwean vice president and other leaders of the repressive dictator Robert Mugabe’s ZANU-PF political party. The Human Rights Campaign included Jordan Sekulow in its 2014 report “The Export of Hate,” which profiled leaders of anti-LGBT organizations around the world.

The African wing of the ACLJ helped distribute a pamphlet that advocated for constitutional prohibitions on abortion and for “sexual relations between partners of the same-sex, bestiality, and other perversions to remain a criminal activity.” (Homosexuality has been illegal in Zimbabwe since 2006.) The constitution now includes a clause requiring Parliament to “protect the lives of unborn children.” An effort by the ACLJ to put a similar constitutional ban on abortion in Kenya’s new constitution failed.

It’s unclear how far Sekulow’s success in fighting Christian “culture wars” in other parts of the planet will help him fight for his latest client. Since his first Supreme Court case, in 1987, when multiple media outlets reported on his aggressive demeanor toward the justices, he has been known among civil liberties attorneys as an adroit litigator and a “true believer.”

But since his last Supreme Court case, in 2008, Sekulow has used much of his time to burnish his image as a cable news analyst. He also hosts a radio show, “Jay Sekulow Live!” which is syndicated on satellite radio and takes a Christian right approach to discussing law and civil liberties.

Even the ACLJ seems to have taken a step back from litigating civil liberties cases on behalf of groups in the Christian right, and has become instead a focal point for social media chatter on the threat of the Islamic State, the fight to defund Planned Parenthood, and the persecution of Christians in Africa and the Middle East. The latest lawsuit the ACLJ has announced is against the Department of Justice, to get records of former Attorney General Loretta Lynch’s June 2016 meeting with Bill Clinton. The ACLJ’s most common course of action these days is to submit unsolicited amicus briefs to judges considering a ruling on civil liberties.

Still, there is no denying Sekulow’s polished approach to the media, or how that might come in handy in the coming months. “He’s going to be the Lanny Davis of this,” a source familiar with Trump’s legal team told Axios, in reference to the telegenic lawyer who represented Bill Clinton during the Whitewater scandal.