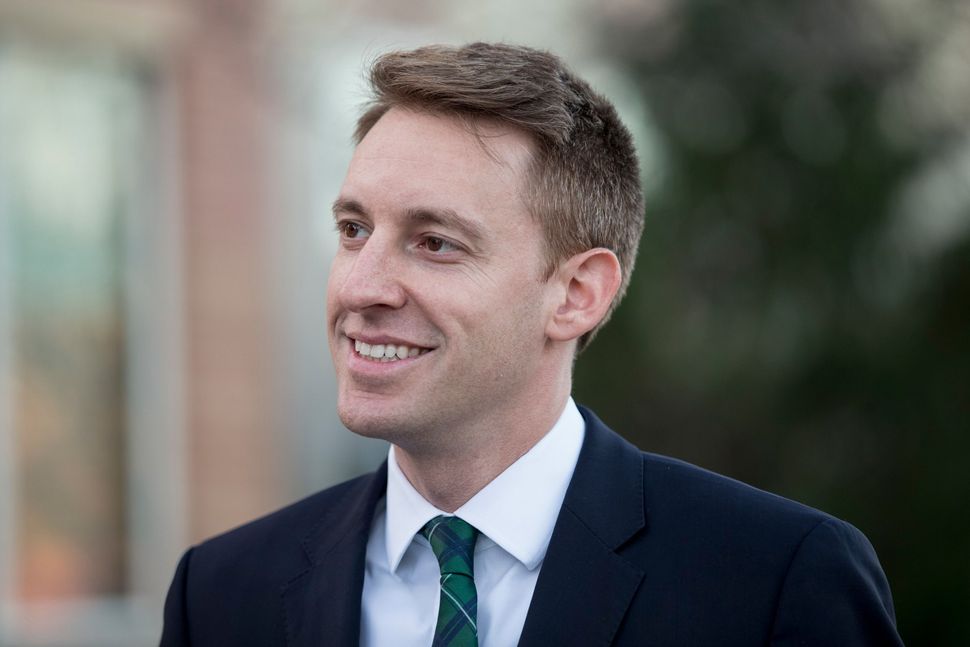 Jason Kander may have lost his bid for Missouri’s seat in the Senate last year, but one seminal TV spot has ensured that he’s still a rising star among Democrats trying to figure out how to win back America’s heartland.

In the ad, Kander discusses the need for background checks on gun sales. Not a novel idea for Democratic candidates. But Kander, a retired U.S. Army captain who served in Afghanistan, talks about gun control while assembling an AR-15 rifle.

“You never know what will change a race, but this ad did,” said Terry Smith, a political scientist at Columbia College of Missouri. “It was viral on steroids.”

Ultimately, the ad failed to achieve its mission. Kander won only 46.4% of the votes, sending Roy Blunt, with 49.2%, back to the Senate. But he outperformed Hillary Clinton, and had a small lead over Blunt going into Election Day. In a disastrous year for Democrats, that alone makes Kander a success story worthy of studying, emulating and promoting within the party.

On his father’s side, Kander is the scion of a Jewish family with deep roots in the Midwest. He’s also married to an émigré from the former Soviet Union with whom he found a strong connection to Judaism. Now, at a time when other Midwestern Jews have found political success as Republicans, the Democrats are hoping there’s something in his mix of military credentials, heartland appeal and typically Jewish politics they can use in 2018. And Kander is wondering what’s next for him.

“People want to hear more about how I ran 16 points ahead of the presidential ticket as a progressive in a red state,” Kander told the Forward in a June 9 interview. “It’s not about people trying to rally one single person over a common cause or not, it’s about all of us together making the argument about what we believe in.”

Experts agree Kander was on to something. He managed to maintain his moderate-liberal agenda, including support for a single-payer health care system, while winning votes in rural areas that have all but turned their backs on Democrats. “Hillary Clinton probably weighed him down,” said Dave Robertson, chair of the political science department at the University of Missouri-St. Louis. “The Republicans tied him to Clinton, and that held him back some.”

Nevertheless, Kander has stayed on the Democratic political scene since the election. He’s focusing now on the issue of voter rights. He established an organization, Let America Vote, which has taken a new approach to the issue, attempting to make it politically costly for elected officials to support measures Democrats view as voter suppression. He points to Trump’s claim of massive voter fraud in 2016 and to his decision to form a commission on the matter as signs that Democrats need to take on the issue forcefully.

Would a successful voter rights initiative have put Clinton in the White House?

Kander won’t go that far, but he does point to Wisconsin, a state that Trump won by 20,000, where some 300,000 voters were stricken from the rolls. “So, the president of the United States looks at a state like Wisconsin and says to himself, ‘Well, if I can make the entire country look like that, then I can win re-election,’” Kander said. “Voter suppression is at the very core of the Trump re-election strategy.”

The organization has seen some success so far, forcing the opening of an election center in Georgia during the special elections for Congress, and successfully campaigning against New Hampshire delegates who opposed voting rights measures.

Kander, 36, was born in Kansas to a Jewish father and a non-Jewish mother. A graduate of American University in Washington, he joined the National Guard after the 9/11 terror attacks. Later, after completing his graduate studies at Georgetown University’s law school, he was commissioned as an Army officer and went on a tour in Afghanistan. His political career kicked off in 2008, when he was elected to the Missouri House of Representatives. This was followed by a successful campaign for secretary of state.

Kander describes his family as Reform but not very observant. He went to a Catholic school to be together with several children from troubled backgrounds whom his parents took in.

Kander’s true connection with Judaism, he said, came via his wife, Diana nee’ Kagan, who with her parents emigrated from the Soviet Union to flee anti-Semitism. Conversations with his in-laws, Kander recalled, drove home the understanding of what it means to be a refugee, and of the importance of a humane immigration policy.

Diana Kander, is a bestselling author and sought after speaker on business entrepreneurship. In her bio Kander writes that after growing up in the Soviet Union, she “perfected her skills as a capitalist” by selling flea market goods to classmates.

Still, it was a Birthright trip to Israel with his wife that really made Jason Kander feel like a Jew.

“We were at a kibbutz and we were at a Shabbat service, and I opened up the prayer book and on the first page it said that the prayer book was in thanks to the sponsorship of this family in a temple in Kansas City,” Kander said. That family was related to him. “For me it was a moment when I really kind of connected in a real serious way with my personal identity as a Jew,” he said.

Kander’s appeal to Missouri voters had nothing to do, of course, with his Jewish faith. It was his military background that resonated with voters. “Kander’s military service was a big plus for him in the state, mainly in rural areas,” Robertson said.

A self-described liberal, Kander stressed issues of clean government and accountability in his campaign, in which he sought to paint his rival Blunt as a Washington insider. Polls showed that the message was working. Kander’s only advice to fellow Democrats is to stick to their issues, and don’t ignore voters’ concerns.

Still, Kander’s next step in politics is not clear. His options in Missouri are limited. A Democrat holds the next Senate seat up for election, and congressional seats are mostly in red districts. Voting rights activism, however, is keeping Kander in the national spotlight for now.

There’s another reason Kander’s name might sound familiar, though. His great-uncle John Kander, now 90, is one of Broadway’s most successful composers. He was responsible for the tunes of the musicals “Cabaret” and “Chicago,” among others. Jason Kander grew up with his uncle’s music at holiday gatherings and is passing the family love of music along.

“I don’t play an instrument, but my 3-year-old son and my wife and I hold a lot of dance parties in the mornings. It’s a good way to get him moving.”