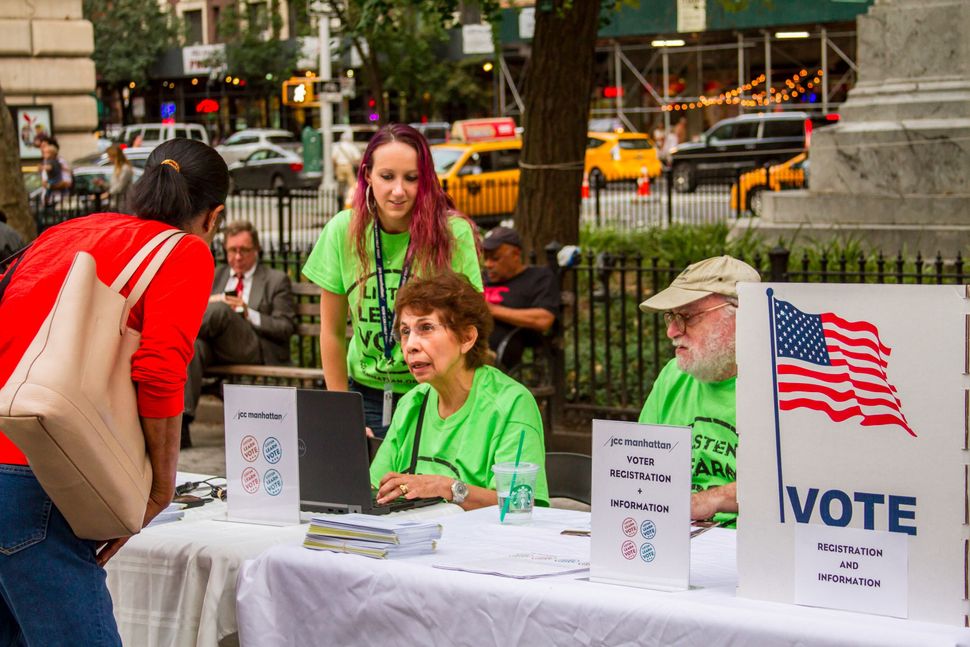 When philanthropist Barbara Dobkin founded Ma’yan in 1993, her goal was to foster the women’s movement within Jewish communities. Which is exactly what Ma’yan achieved: Based out of the JCC Manhattan, the organization published an influential feminist Passover Haggadah; helped launch the Ritualwell website — offering new resources for spiritual practice — and worked with teen girls to explore personal development, critical inquiry and ethical leadership.

Now, Dobkin and longtime collaborator Eve Landau, who has served as Ma’yan’s executive director throughout its tenure, are setting their sights even wider: In July, Ma’yan will be folded into a new Center for Social Responsibility at the JCC. Landau will serve as the director of the new center, which launches at the start of the JCC’s new fiscal year, July 1.

“In a way, this was a natural progression for Ma’yan,” said Dobkin, who has provided an undisclosed amount for the CSR’s initial operational funding. “We could have kept doing what we’re doing… but it’s time for us to do something bigger and broader.”

While the idea of creating a social responsibility center at the JCC has been discussed for years, both the fallout from last year’s presidential election and the increasingly bitter debate within the American Jewish community about Israel’s policies may have hastened the process.

“The polarization in our country since the election is definitely something that’s on our minds,” said the JCC executive director, Rabbi Joy Levitt. “We are concerned about fragmentation within our own community. We’re concerned because we know that the Jewish community has thrived in America because of its strong democracy. Our values are important in the conversation about how we treat the stranger, how we care for those who are less fortunate, how we deal with hate. All these things are muscles that the Jewish community has developed over many, many years, and we see the challenge that’s facing the country right now.”

For Dobkin, recent political developments in the United States represent a lack of essential knowledge. “One thing that’s been obvious in everything that’s going on is that there’s a lot of civics education missing,” she said. “And I’m not talking about just for our kids, but nationally. There’s so much we don’t know about democracy, and so much we take for granted.”

And so the new center will emphasize civic education, engagement and advocacy. A planned “20-20 Vision” initiative will target high school students voting for the first time between now and 2020. Part of those efforts will include a voter registration drive in the JCC lobby.

The CSR’s programming will fall under the heading “We the People: The Democracy Project.” And while all plans have yet to be finalized, the center’s official mission is stated clearly: “… to be a catalyst in the Jewish community, encouraging individuals, families, and institutions to amplify the Jewish value of repairing the world through education, engagement, and advocacy.”

One of its first public programs will be the exhibit “Muslim in New York: Photographs From the Museum of the City of New York,” which will open in September in the JCC’s Laurie M. Tisch Gallery and is presented in conjunction with the JCC’s Lambert Center for Arts + Ideas. Several CSR programs will also be collaborations with the JCC’s other “centers,” and social activist Ruth Messinger has been tapped to integrate CSR’s work into those other centers.

Ma’yan’s continuing teen programs will be administered by the CSR along with other long-term community service and advocacy projects, including the JCC’s Partners for Literacy + Math Programs in Manhattan schools, and outreach to local mosques and churches for joint programming.

“When this JCC started, it started with the premise that we would be a community that reached out to our neighbors,” Dobkin said. “So this has been part of our DNA from the beginning, it’s just getting a little bit more…”

In June the JCC hosted a kiosk for New York City’s IDNYC program, which provides municipal identification cards that can help undocumented immigrants and transgender or homeless people gain access to city services. Landau describes the JCC’s participation in IDNYC as “a precursor of things to come.”

In some ways, CSR’s mission is modeled on an old idea in the JCC movement in which the centers served as places of acculturation for new immigrants. “When JCCs were first created in the early part of the 20th century, they were responding to a critical need to help new Americans, new immigrants, understand the land they were living in, understand democracy and understand America,” Levitt said. “We still believe that… helping the people who walk through our doors be engaged in civics — in how to keep our democracy strong and preserve its values and fight for its survival — is important.”

Like Ma’yan, the CSR will be based in a local community but will develop programs with a national reach. “We’re starting [to think] locally, but the potential for going national in some of the programs certainly exists,” Landau said. “Ma’yan has always thought of itself as a research and development operation and has been very interested in having our work replicated, and I think the CSR… has the same goal.”

CSR collaborations on specific projects are planned with the Bender JCC of Greater Washington and with JCCs in Baltimore, Boston, Pittsburgh and Palo Alto, California. Those JCCs and many others offer social justice programs as well as community outreach efforts, such as multicultural Shabbats. The Washington JCC operates an LGBTQ outreach and engagement program. And this fall, the JCC of Greater Pittsburgh will launch a Center for Loving Kindness and Engagement, with a platform built on the imperatives “Love your neighbor as yourself” and “Do not stand idle as your neighbor bleeds.”

What the Manhattan JCC describes as “the sunsetting” of Ma’yan suggests that Dobkin has accomplished what she set out to do nearly a quarter-century ago. And that raises the question of what would need to happen for Dobkin to look back years from now and believe that the CSR had been successful.

“I would just like to see our community… have a place where we really can come together and talk through these issues and find, if not common ground about something, then some common ground about something else, and to be civil to each other and to respect each other,” Dobkin said. “I’d like to feel that there’s a place in the Jewish community for all our voices. I’d like to hope that we have a lot of values on which we can agree.”