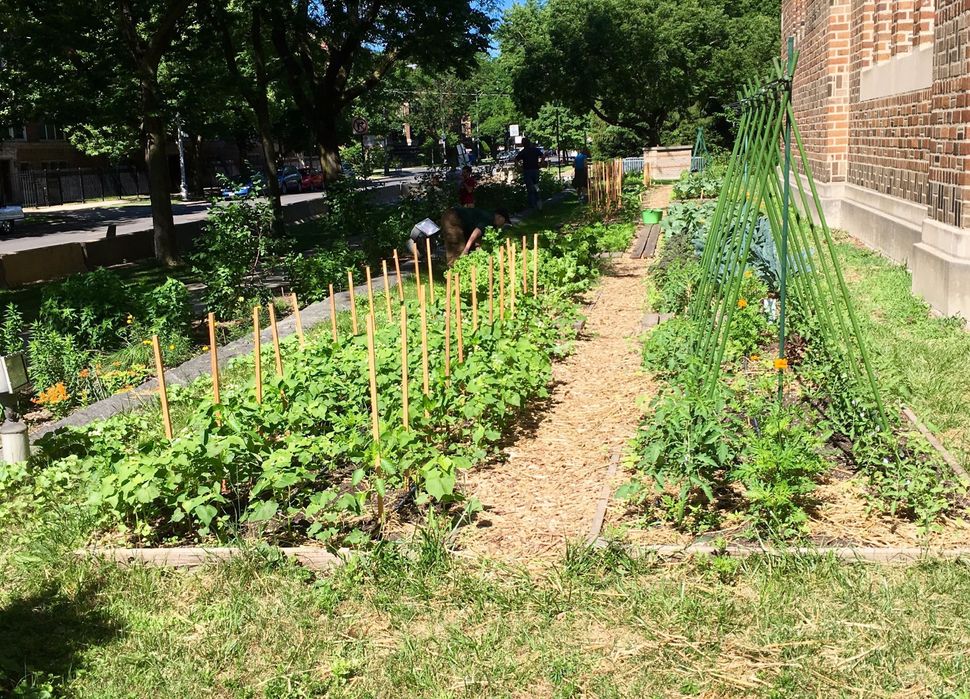 The farm at KAM Isaiah Israel Congregation in Chicago. Image by Aimee Levitt

The farm at KAM Isaiah Israel Congregation in the Kenwood neighborhood of Chicago is very much an urban farm, with a bus line running past the side entrance, and tourists passing by to see Barack Obama’s former home across the street; so, the volunteer farmers do not feel obligated to wake up at the crack of dawn. Still, they prefer to work in the cool of a summer morning, so by 9:30 a.m. on a recent Sunday — farm day — the weekly harvest was well underway.

Half a dozen farmers crouched between the long rows of crops that run parallel to Hyde Park Boulevard, plucking large leaves of collards, kale and mustard, and small black raspberries and red serviceberries. In the synagogue vestibule, pungent with the smell of wild onions, another volunteer sorted the leafy greens and berries into boxes. The day’s yield would total about 50 pounds; later on in the season, when tomatoes, peppers, cucumbers and eggplants are ripe, the volunteers anticipate a harvest five or six times that.

Robert Nevel stood on the front steps of the synagogue, directing traffic and assigning tasks. He wore a big straw hat and a soil thermometer around his neck, which appeared to be some sort of mark of authority: He started the project nine years ago and has led it ever since. 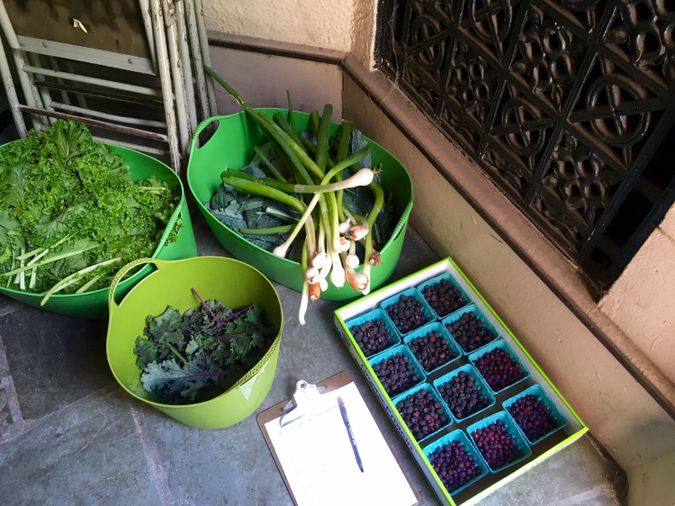 Some of the fruits and vegetables harvested from the KAMII farm. Image by Aimee Levitt

The KAMII farm now comprises two 50-yard-long plots of cultivated crops and two mostly self-sustaining “food forests” — fruit and nut trees, berry bushes and other perennials that can grow without anyone around to tend them — plus two more garden plots at a nearby church and elementary school. In the past nine years, it has produced 22,000 pounds of food, most of which it has donated to shelters and public housing projects in the neighborhood.

Nevel acknowledged that it’s not a lot in the grand scheme of things, but it’s 22,000 pounds of fresh produce that would have otherwise had to have been transported hundreds of miles, costing extra time and money and incalculable damage to the environment. KAMII has a broad definition of the term “food justice”: here, it means not just providing healthy food for everyone in the community, but also helping to maintain environmental stability. KAMII farm manager Owen Needham, who previously worked at a not-for-profit urban farm in Columbus, Ohio, explained that although there are other houses of worship that run urban farms, none — at least that he’s aware of — have as large a program, which is why KAMII serves as model for other synagogues and churches across the country.

The project began in the winter of 2009, around the same time that Michelle Obama, inspired by a 1991 New York Times op-ed by Michael Pollan, announced her plan to revive the White House vegetable garden. The two events were not directly related, but Nevel had also read the Pollan article, and it fit in with ideas about buildings and environmentalism he’d been thinking about since architecture school. He joined in a committee meeting to discuss how to make the synagogue greener.

“Everyone was thinking that the inside of the house of worship was sacred while the outside was profane,” he recalled. “There were so many leftover spaces outside. I wanted everyone to think of those as significant and sacred also.”

At the time, those “leftover spaces” were covered with lawn. Nevel considered the lawn more environmentally friendly than asphalt, but less useful and energy efficient than a food-producing garden. With $700 in seed money from the synagogue’s social justice committee, he and a team of volunteers planted a modest plot in the shape of a Star of David. (“This is a very tidy neighborhood,” said Nevel, “and it was very figural.”) The first crop was rhubarb. Now there are 30 crops, and the project is funded entirely by grants and gifts. This includes operating costs, plus salaries for two staff members: the farm manager and a director of the farm school program that runs for six weeks every summer. 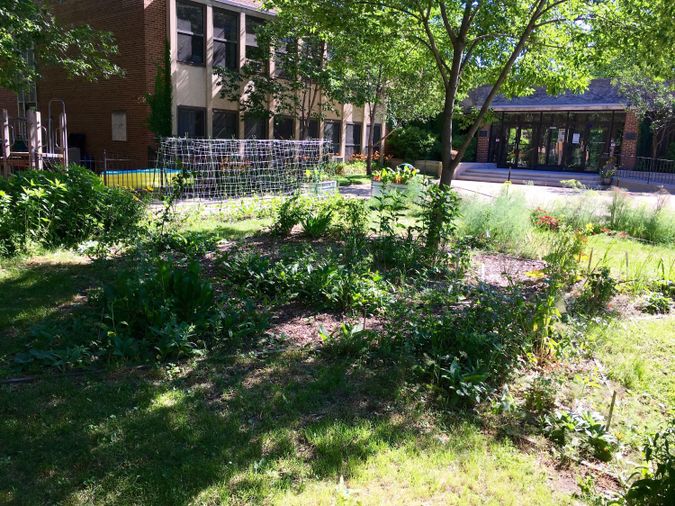 The original Star of David-shaped plot at the KAMII garden. Image by Aimee Levitt

The farm runs almost all year round, with the bulk of the work happening on Sundays. Seeds arrive every February from a supplier in Winslow, Maine, and the first planting is March 1. Until the weather gets warm, the plants incubate in a makeshift greenhouse that was once the rabbi’s study. The volunteers spend the spring preparing the beds, building trellises, turning over the soil, and installing the drip irrigation system. The first harvest usually comes in June, and the growing season continues until late October. It takes most of the month of November to dismantle the garden. Then it’s time to start planning the annual Food Justice and Sustainability Weekend, which takes place every Martin Luther King Day. And then the cycle begins again.

There are 28 core volunteers, though not all show up every Sunday. About half are KAMII congregants, while the rest come from the community. Being Jewish is not a requirement, but at least one of the volunteers, Aaron Levine, finds it a particular source of pride. “This is what we’re supposed to be doing,” he said, “feeding the community. To me, this is as Jewish as you can get.”

As soon as it began harvesting, the farm began the donation program, which it decided to limit to institutions within a mile radius of the synagogue. The circle contains portions of the Kenwood, Hyde Park, Woodlawn and Washington Park neighborhoods and pockets of both extreme wealth and extreme poverty. In eight years, said Nevel, they’ve never missed a week. “There’s an expectation from the recipients that every week they’ll be receiving fresh food on Sunday,” he explained. “If we don’t deliver, we’re reneging on an established relationship.”

On this particular Sunday, the volunteers prepared donations for the Kenneth Campbell Apartments, a public housing complex for senior citizens, and Door of Hope, a men’s shelter. Each institution would receive three large boxes of greens and six or eight small boxes of berries. Nevel was apologetic about making the deliveries by car; the two institutions were in completely different directions and it was just too difficult to carry 50 pounds of greens on foot. Plus, everything tastes better if you eat it within 90 minutes of harvesting.

Though the recipients are pleased to take whatever food KAMII is willing to provide, they have definite preferences, said Becky Callcott, the volunteer who was responsible for filling the boxes for delivery. “People like collards a lot,” she reported, “but it took a while to get them used to kale.”

At Door of Hope, Nevel spent some time in the kitchen chatting with Matthew Clock, the cook. They couldn’t remember how long they’d known each other, but guessed it was around seven or eight years. Clock grew up in a small town in Mississippi and lamented how many city people are unaware of where their food comes from. He was planning to cook up the kale for that night’s dinner; the collards were hardier and could last a few more days.

Once Nevel returned from making deliveries, he and the other volunteers ate a communal lunch inside the synagogue. Then they planned to work on the other satellite plots, at Reavis Elementary School and the Kenwood United Church of Christ. Later in the afternoon, they would visit a few of the community gardens in the neighborhood and glean the produce that hadn’t been harvested (the community gardeners signal that they’re okay with this by leaving a small white stone in a corner of their plot); they collect about 500 pounds of extra produce every year.

Though Nevel has been doing this every Sunday since the project began, and plans to continue for the foreseeable future, he still marvels over the process. “We start with a 10-pound box of seeds,” he said, “and ten months later, we have four or five thousand pounds of food. It’s a huge leap from soil, sun and water. At the end of the year, it’s really kind of amazing.”