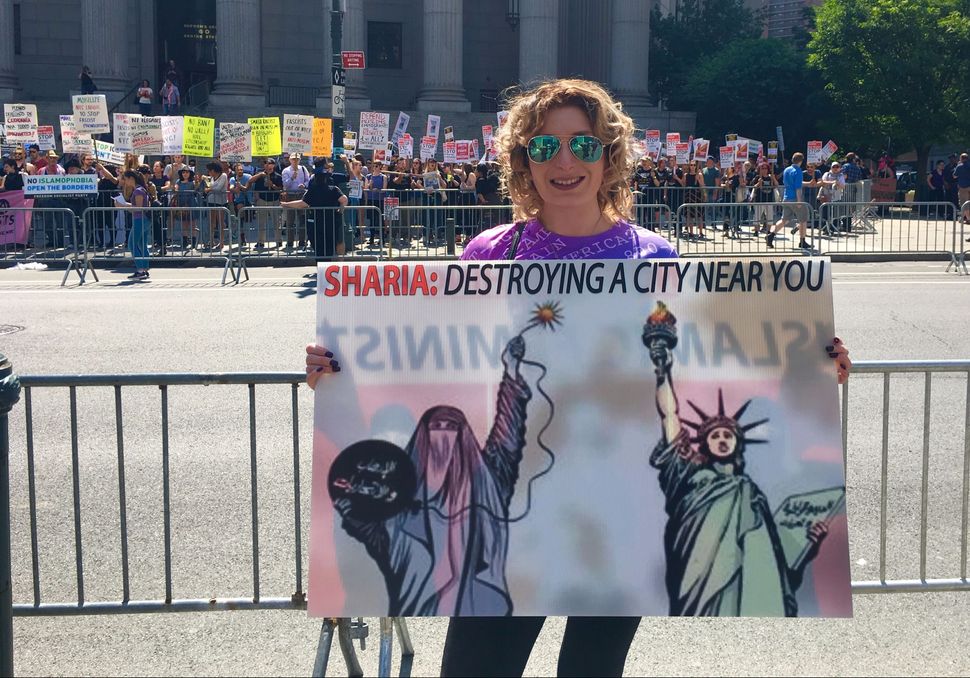 Image by Courtesy of Laura Loomer

Just as Brutus and his collaborators brandished knives and went in for the kill, one audience member decided to intervene.

“Stop the normalization of political violence against the right!” Laura Loomer yelled, storming the stage of Shakespeare in the Park’s now-famous performance of “Julius Caesar.” For a brief second, all was quiet. The would-be assassins, wearing costumes of Beltway-gray suits, were only a few lines away from killing the title character, costumed to evoke President Trump. Then a voice saying “Security, please” came on the loudspeaker; the crowd began to boo, and guards escorted Loomer outside the Delacorte Theater in Central Park. Loomer live-streamed the entire protest.

Once outside, Loomer continued to scream a litany of accusations: “Shame on all of you for promoting political violence against Donald Trump!” “You guys are just as bad as ISIS [the Islamic State group]!” “CNN is ISIS!”

“The left doesn’t support blue lives,” she told the police officers detaining her. “They wanna kill you guys.”

Loomer’s performance was another notch on the belt in a budding career of far-right provocation. It earned her a spot on Hannity, instant “alt-right” cachet online and the admiration of her arresting officers. (She was charged with misdemeanor trespassing and disorderly conduct. Loomer reported that at the station the officers told her that her mugshot was “the nicest mugshot they’ve ever seen.”) 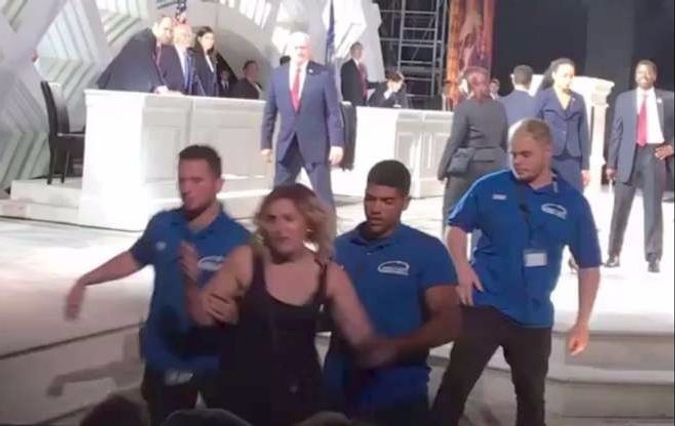 The actors playing Julius Caesar (center) and the conspirators (right) look on as Loomer is escorted from the Delacorte Theater. Image by Twitter

“Most people don’t really have the balls to get onstage and protest,” said Loomer, who is 24. “But the fact that I’m a conservative, and I’m a woman, and I’m nonviolent, and I’m just a New York resident, it makes a statement.”

Loomer is one of the few women — and one of only a handful of Jews — in the far right’s cast of characters. She is styling herself as a media voice that trumpets Jewish causes in one breath and decries “Muslim “refugee” predators” in the next. Just don’t slot her into the “alt-right,” the catch-all term for far-right Trump supporters steeped in internet culture. She’s part of a Twitter-savvy crew of Trump fans that are trying to use the tactics of the “alt-right” — memes, social media targeting and aggressive misinformation — to purge the far right of pervasive anti-Semitism while upholding the sanctity of white European culture.

In the backlash to the protest, people on Twitter from both the far left and the far right attacked Loomer on the basis of her Jewish identity. David Duke, former leader of the Klu Klux Klan, called her “classic controlled opposition.”

“They’ll say, ‘Oh, this stupid kike who stormed the stage of ‘Julius Caesar,’ ‘Oh, the Jews are always up to dirty tricks,’” Loomer said. “The only reason they’re attacking me is because I’m Jewish.”

Though the “alt-right” has never claimed unity, anti-Semitism has frequently proved a divisive issue for its biggest personalities, who have clashed numerous times over allegations of anti-Semitism and counter-allegations of philo-Semitism. In December, the meme wiz known on the internet as Baked Alaska was barred from the DeploraBall, a far-right inauguration party, for his history of anti-Semitic tweets. More recently, Loomer and a friend backed out of appearances at an “alt-right” rally in Washington in June, after Richard Spencer, the white nationalist icon and lover of Nazi salutes, was added to the list of speakers. 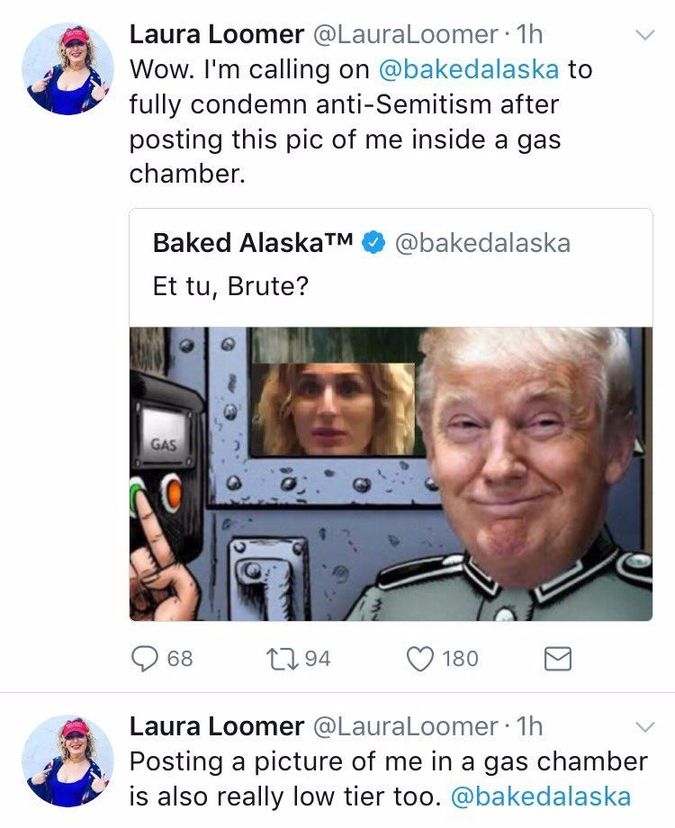 In June, Baked Alaska tweeted a meme showing Laura Loomer in a gas chamber and Trump as an SS officer. Image by Twitter

Loomer and the friend, the conspiracy theorist Jack Posobiec, organized a counter-rally at the exact same time in front of the White House. Many saw the dueling rallies as a sign that the “alt-right” as it was once known is now dead.

“They’re allowed to think the way they do,” Loomer said of Spencer and Baked Alaska. “I respected their right to say what they want to say, even if it’s anti-Jewish. But I’m not going to participate in it.”

Since June, people in Loomer’s circle — which includes Posobiec, the “meme mastermind” Mike Cernovich and the White House Press Corps “troll” Lucian Wintrich — have tried to rebrand in order to distance themselves from the “alt-right.” Loomer personally favors “New Right,” a term suggested by Cernovich.

Spencer said that the divide between the “alt-right” and Loomer’s so-called “New Right” is “a very serious divide that is ideological and political” — and nothing new.

“This divide was probably masked in 2016 because we were all on the Trump train,” Spencer said. “After the campaign ended,this very stark division has emerged.” 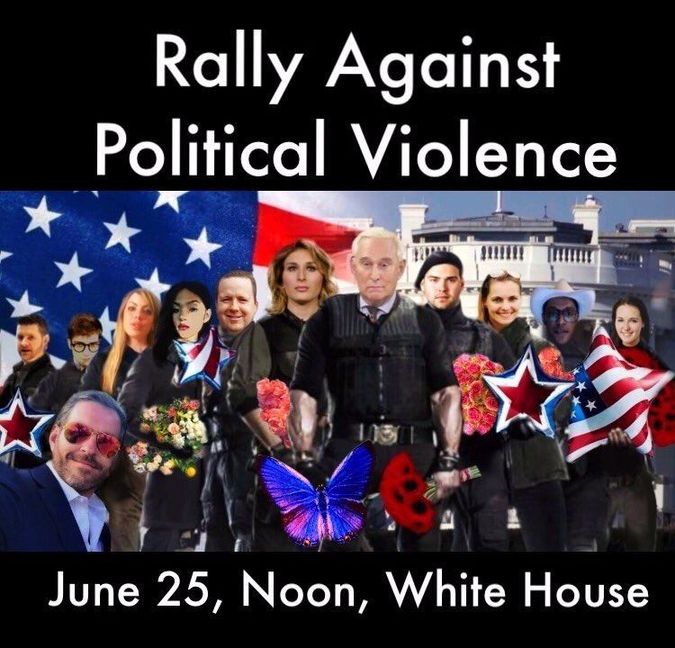 An ad for the Rally Against Political Violence features Loomer and Posobiec standing on either side of Republican operative Roger Stone. Image by Reddit

Loomer was raised in Arizona by a Jewish father who taught her to identify as “ethnically, culturally and politically Jewish.” She originally attended Mount Holyoke College in Massachusetts, but left after one semester after feeling targeted for being conservative.

“I ate every single meal by myself for an entire semester,” she said.

She transferred to Barry University, in Miami, and became active in campus Republican groups.

As a kid, Loomer was teased for being overweight and having a “Jewish nose.” Despite majoring in communications, she assumed that because of her appearance she would not be successful in media.

In September 2014, however, Loomer had her first taste of media exposure when she tipped off a Florida politics blog that an imam had been invited to a 9/11 memorial event on Barry’s campus.

“We live in a Judeo-Christian country, and they let the imam open up the ceremony,” she said. “He was literally chanting ‘Allahu akhbar.’ That’s not cool, because that’s what the terrorists were chanting.”

After that, Loomer said, she “kind of became known as the campus Islamophobe.”

Loomer quickly capitalized on the designation by engineering a hidden video stunt that exposed the school’s willingness to support the Islamic State group. In March 2015, Loomer met with administrators in Barry’s Center for Student Involvement to see about starting a club: “Sympathetic Students in Support of the Islamic State of Iraq and Syria.” Loomer said she wanted to send aid to the fighters’ families. The school only asked that she change the name to “Students in Support of the Middle East.”

The video of her encounter with Barry administrators was released by Project Veritas, a conservative media site that routinely releases hidden camera videos. In 2010 Project Veritas’s founder, James O’Keefe, pled guilty to misdemeanor charges related to a break-in at the offices of Louisiana Senator Mary Landrieu’s office in New Orleans. After Loomer’s video came out, she was suspended for violating Barry’s Student Code of Conduct, and the school filed a criminal complaint, which was eventually dropped. (Barry University officials could not be reached for comment.)

“It was a stunt, but it was to prove a point about how politically correct universities are,” Loomer said.

“People would accuse me of setting them up, but I was so obvious in my dialogue,” she added. “It was so humorous how they were responding that I wanted to laugh.”

Stunts have remained central to Loomer’s repertoire. On Election Day last year she requested a ballot under the name Huma Abedin while wearing a burqa. At the New York edition of the national March Against Sharia on June 10, Loomer put a burqa on the “Fearless Girl” statue in the Financial District. At an event for Chelsea Clinton’s new children’s picture book in June, Loomer asked Clinton to sign the book to Juanita Broaddrick, a woman who has claimed that Bill Clinton raped her.

Some of Loomer’s earlier stunts were featured on Project Veritas, which she left in June. (Loomer said she left voluntarily, and maintains a good relationship with James O’Keefe.) Since then she has been the New York correspondent for The Rebel, a conservative Canadian news site that has been called the “Canadian Breitbart.” One of Loomer’s colleagues at The Rebel is Gavin McInnes, who is the founder of Vice Media and has defended Holocaust deniers.

Loomer’s protest at the Public Theater in June has become her best-known stunt by far.

2017 in a picture: A conservative speaks out against political violence. Liberals surround her with knives in their hands ready to kill. pic.twitter.com/rOPwatpNBY

Loomer received praise for her action from many conservatives, but was belittled by Richard Spencer, who refers to Loomer and her circle as “alt-light.” Loomer responded by tweeting that Spencer couldn’t “stand the fact that a Jew is in the spotlight.”

Just admit it @RichardBSpencer. You can’t stand the fact that a Jew is in the spotlight. https://t.co/X1eMvLyY9d

Loomer constantly receives anti-Semitic tweets from Spencer’s followers and is the subject of many anti-Semitic posts on internet forums on sites like Reddit and 4chan. 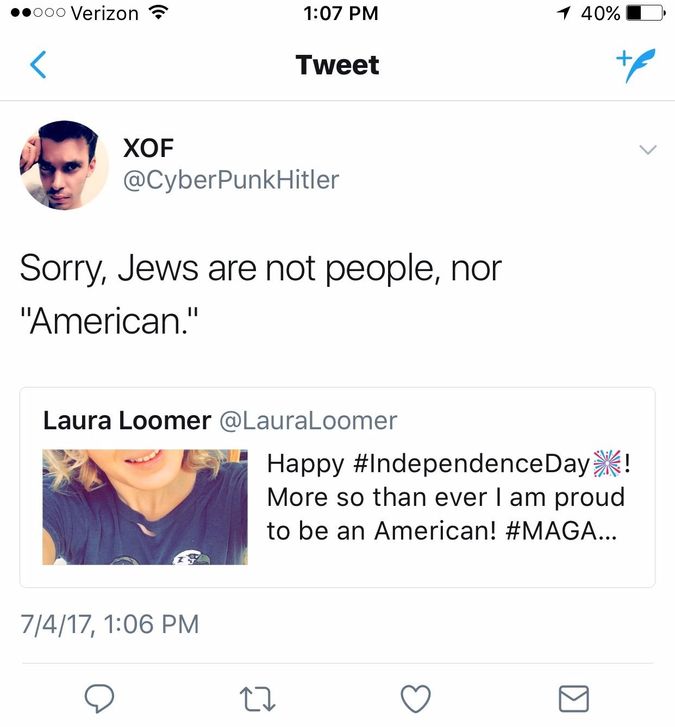 A response to Laura Loomer’s tweet on the Fourth of July. Image by Courtesy of Laura Loomer

While Loomer is wary of Spencer’s prejudices — she believes him to be an avowed anti-Semite — she seems have established a kind of detente with him, one based on a classic ground rule of the “alt-right”: all kinds of free speech are okay.

Spencer, who gave a speech The Atlantic called “among the most orthodox Nazi statements ever uttered by an American public figure,” said the division between the “alt-right” and the “New Right” is not just about the groups’ “willingness to criticize Jewish influence.”

“Most obviously, racialism is the dividing issue, in the sense that the “alt-right” thinks in terms of racial identity as being of foundational importance to what we do,” Spencer added. “The “alt-light” wants to avoid that issue, and in a way they want to be hostile to the notion of white identity.”

But white identity is important to Loomer, who says she appreciates the white nationalists’ “efforts to preserve European culture and civilization.”

“They don’t think I’m white, because they think Jews aren’t white,” Loomer said. “Ashkenazi Jews are white. Sephardics are more Mediterranean. But it’s an absurd thing to classify all Jews as not white.”

Correction: An earlier version of this article stated that James O’Keefe, the founder of Project Veritas, was found guilty of breaking into the offices of Louisiana Senator Mary Landrieu. O’Keefe pled guilty to misdemeanor charges of entering federal property under false pretenses.