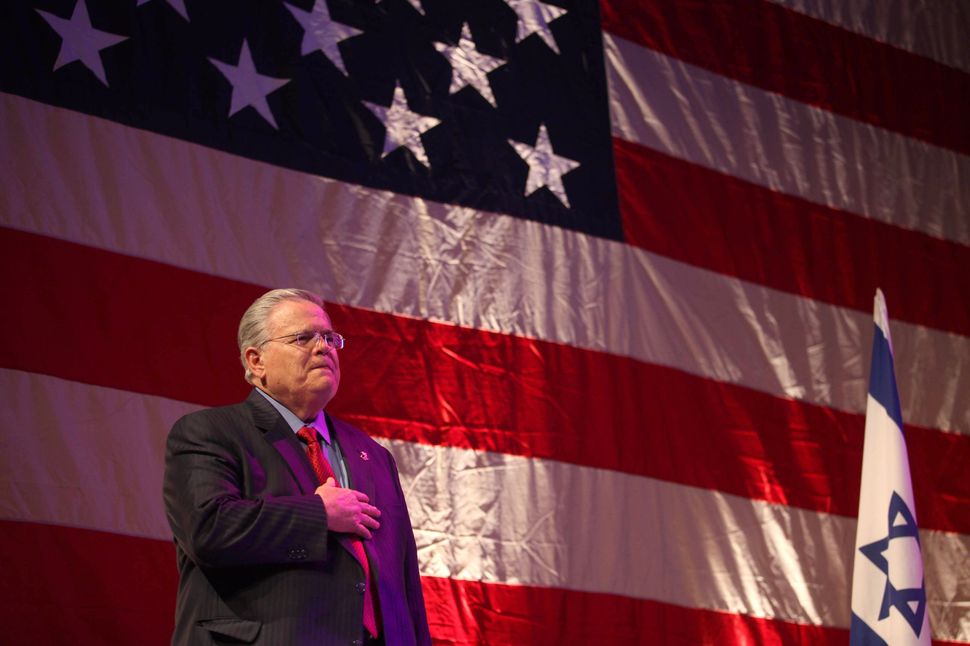 On Monday night, the megachurch pastor the Rev. John Hagee addressed a crowd of thousands at the annual summit of Christians United for Israel, the organization he founded over a decade ago.

Standing in front of a massive projected image of the Western Wall, the controversial evangelist spoke in uncompromising and biblical language about the State of Israel.

“Jerusalem is where King David captured that city from the Jebusites 3,000 years ago, it is today and forever shall be the eternal and undivided capital of the State of Israel,” Hagee said. “The Palestinians have no claim to Jerusalem, it belongs to the Jewish people.”

The Palestinians have no claim over the city of Jerusalem. It belongs to the Jewish people! #CUFIDC #CUFI #Israel pic.twitter.com/KBNE1DyJOz

Such explosive statements are par for the course for Hagee, a self-proclaimed Christian Zionist who views the founding of the modern State of Israel as a step toward the prophesied end times, in which a cataclysmic world crisis will spark the return of Jesus Christ.

While Hagee enjoys close ties with Israeli leaders, his ideology — in which Israel and the Jewish people are seen as characters in a long biblical arch culminating in the return of Jesus — has drawn criticism from others, including some Jewish leaders.

When Hagee came out in support of John McCain in 2008, the Republican presidential hopeful swatted off the endorsement, citing a controversial sermon in which Hagee argued that biblical verses made clear that the Holocaust was part of God’s plan to chase the Jews from Europe and drive them to the Land of Israel.

But Hagee has enjoyed something of a return to the political spotlight this year.

A vocal supporter of Donald Trump, Hagee has visited the White House several times recently. He was among a group of evangelical leaders who “laid hands” on Trump in prayer last week.

And Hagee was picked to introduce Vice President Mike Pence at the CUFI meeting in Washington on Monday night. A choir sang Christian devotional music as Pence took the stage.

It was an honor to introduce @VP Mike Pence as the #CUFIDC keynote speaker. Watch his message on the @CUFI Facebook page. ???? pic.twitter.com/PawrbEk8Pg

Hagee, who comes from a long line of pastors, heads a San Antonio megachurch called Cornerstone Church, which cites the support of Israel among its most important tenants. He is the CEO of a not-for-profit corporation, Global Evangelism Television. His widely read 2006 book “Jerusalem Countdown: A Warning to the World” is an extended interpretation of the Bible that imagines an apocalyptic battle between Israel and a host of Muslim countries (and Russia), which causes the second coming of Jesus.

In 2006, Hagee formed CUFI with 400 other religious leaders. The organization claims more than 3 million members and bills itself as “the largest pro-Israel organization” in the United States.

Hagee’s support for Trump seems to hinge largely on his belief that the president is a “friend of Israel.” And, in Hagee’s theology, those who support Israel will reap material and spiritual benefits.

“I have been asked 101 times plus, ‘Why do you think Donald Trump won?’” Hagee said in a November address. “And I have an immediate answer — because he was the only one who was blessing Israel.”