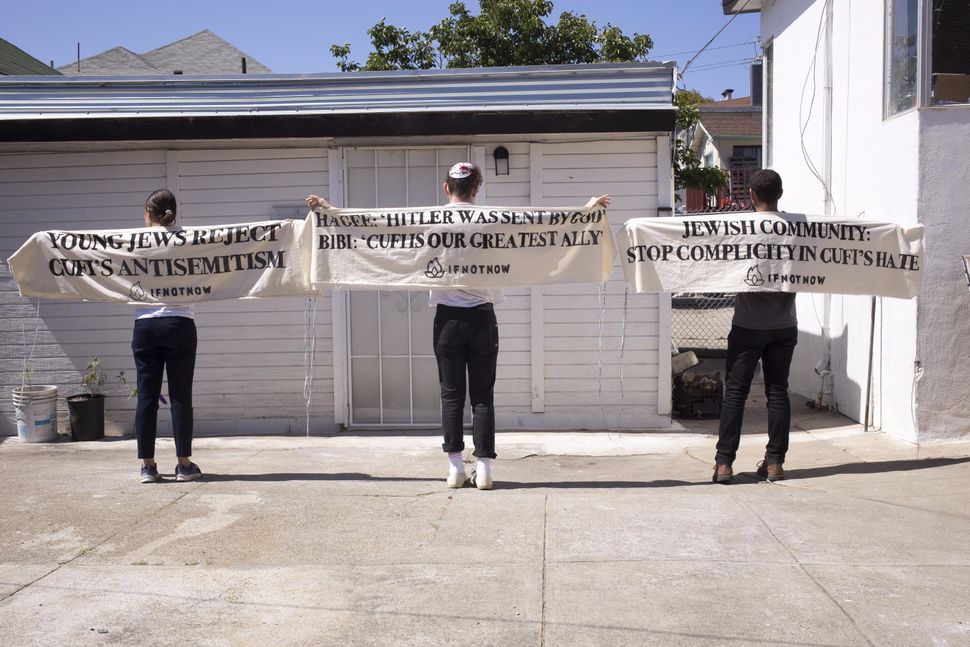 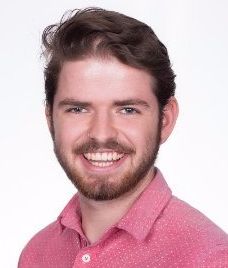 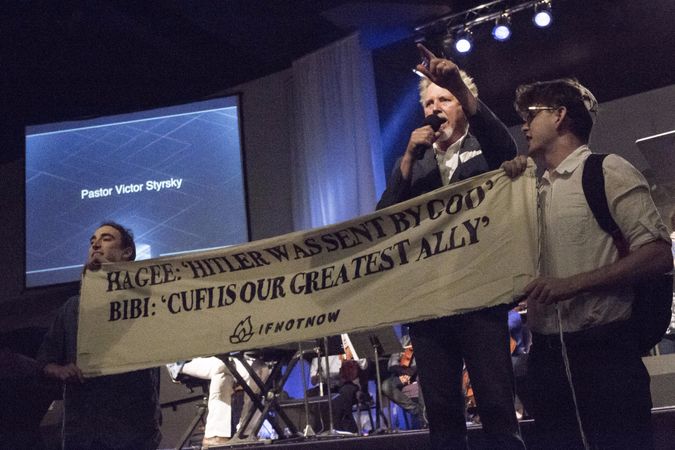 This story hits its crescendo as I am manhandled out of a church, gripping my tallit (prayer shawl) and kippah to remain steady, surrounded by the dissonant chorus of hundreds of Evangelical congregants chanting “Am Yisrael Chai” (“Long Live the People Israel”) to disperse Jewish protesters from their midst.

Twisting those words of our faith against us, Christians United for Israel (CUFI) displayed its precariousness as the shrouded source of Evangelical power at the center of US-Israel advocacy.

As a young Jew, CUFI was an unknown acronym in the alphabet soup of my early Israel education. While AIPAC occupied the throne as the largest and best-funded pro-Israel group in the U.S., the growing specter of a right-wing Evangelical movement escaped mainstream Jewish consciousness.

Yet over a decade after it was founded by mega-pastor John Hagee, CUFI now claims a membership 30 times higher than that of AIPAC and raises millions of dollars in support of settlements and weapons deals through fervent preaching, lobbying and advocacy.

This far-right Evangelical Zionist dominion still reads to me like political conspiracy theory.

But rather than a shallow hoax, CUFI’s dominance in the U.S. Zionist political sphere is one of the deepest points of embarrassment ever produced by our Jewish community’s Israel-at-all-costs politics. 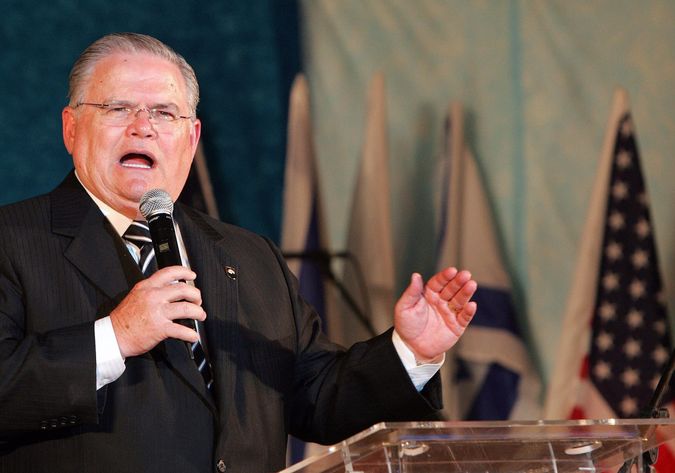 Part of this embarrassment comes from the fact that CUFI’s National Chairman and Founder John Hagee thinks Hitler was sent by God to spur Jews into moving to Israel.

Hagee is a millionaire televangelist whose ministry is broadcast in 150 million homes across the world. From this platform, he and the organization he spearheads blend their far-right Zionist beliefs with vitriolic hatred of all kinds: claiming the US is in a “religious war” with the Muslim faith, that The occupation is “entirely legal” and meant to “improve the lives” of Palestinians, even using Jesus’s name to exhort the US to invade Iraq.

Hagee has also repeatedly claimed, in sober, conscious belief, that Hitler was a divine messenger, and that the Holocaust was crafted with a divine hand.

What possible reason could force hundreds of thousands of children to the gas chambers? Hagee argues that half breed Jews are responsible — furthermore, that Jews are “disobedient and rebellious” and “not spiritually alive.” Since we refused to go to Zion willingly, God was forced to send Hitler as a “hunter,” descended from a lineage of those aforementioned “half-breed Jews.”

In Hagee’s mind, this genocide was just a prerequisite for the “Ingathering of the Jews,” an Evangelical theory about the End of Days, which posits that Jesus will only return once we’re all back in our biblical home.

CUFI’s job in this eschatological chess game, unlike Hitler’s, is to fish rather than hunt us back into our rightful place. This involves casting a multi-million dollar net to direct Soviet Jews into the Promised Land, and funneling millions more into settlements throughout the West Bank and East Jerusalem.

The final chapter of this charade is the final chapter of our people. Some in CUFI believe we will be prodded into conversion by the horrors of anti-Semitism. Some think God will inspire revelation in our hearts at the last moment, allowing us to proceed willingly into rapture. Either way, our flame will be extinguished.

A Pop-Up Shtetl In Oakland Emerges To Disrupt A Jubilee 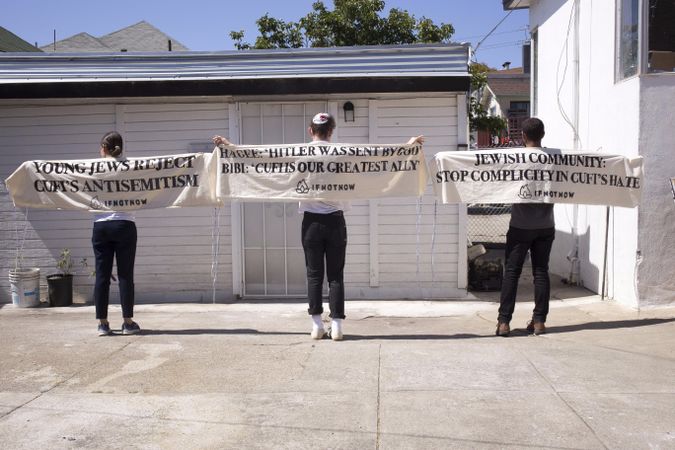 A radical shtetl (or mellah) flowered for one long afternoon in a West Oakland warehouse. Twenty young Jews gathered in song to weave tzitzit (ritual Jewish garments bearing fringes) and sew tallitot. Messages were condensed and words haggled over. Last-minute action plans were drawn, erased, and reconfigured on white boards. Bagels were schmeared and shared as we crafted three prayer shawls-turned-protest signs:

Tzitzit, whose religious purpose is to remind us of the commandments, had been freshly crafted by American Jewish hands dedicated to their tradition to remind our community of its crisis. We were ready to pursue justice as commanded. We were ready to disrupt CUFI’s celebration of the “reunification and liberation” of Jerusalem.

We had learned of a “Jubilee” in Stockton from a calendar of Northern California Jewish events. In the speaker list, we saw there would be Bay Area and Stockton Rabbis offering only the face of institutional Jewish support. The event’s poster desecrated a faded image of the Western Wall with CUFI’s name and messaging. We knew we had to claim our tradition, and make our voices known.

We met CUFI where they chose to speak in our name: a kind, beautiful church where the high-school-age ushers and many parishioners treated us with respect.

But the problem isn’t with individual churchgoers. It’s with CUFI’s leadership, who view Jews as pawns, not people. From the wellspring of institutional dehumanization, many of CUFI’s adherents didn’t know better than to fetishize our Judaism, gawking at a real-life version of those supposedly centered by this event. Some claimed to be teachers of Hebrew, and offered us a “Shabbat Shalom” on a Sunday. Modern renditions of Jewish prayer rang out from the stage, including the Sh’ma prayer with a full speaking of God’s name. CUFI adherents danced along in tallitot, kippot, and teffilin (phylacteries), holding shofars and swaying their bodies in a caricature of our holiest observances.

More centrally, the space was defiled by the racist docu-drama renditions of thickly-accented Arab leaders in the Christian Zionist film “In Our Hands,” whose trailer played in snippets throughout the event. In a pamphlet called “Israel 101,” offered to all attendees, the word “INTIFADA” was plastered in white block letters across a two page spread. Alongside it, was a pair of shifted, bloodshot eyes wrapped in a red keffiyeh. CUFI apparently relishes equating brown faces with terrorism.

When the last speaker, CUFI’s Eastern Regional Coordinator Victor Styrsky, arose to speak, we finally unfurled our protest signs. Emblazoned in our message was a call for our people to choose justice for Palestinians, and ourselves, over blood-stained money and hate.

In short order, Evangelical loudspeakers with Hebrew chants drowned out the messaging of young Jews and our group of protesters was unceremoniously shunted out. As I was pushed roughly from behind, I held fast to our tzitzit and thought on the mitzvot as commanded. We received Torah not in a promised land, but in a wilderness. It was a place where principle superseded geography, where physical security seemed far away. I trusted that even in that perilous moment, our holy threads would bind and guide us through.

If any other organization even hinted at this kind of esoteric anti-Semitism, the outcry would be so loud and destructive it would make even an apocalyptic asteroid blush.

In those endorsements, in Hagee’s speaking engagements at AIPAC, and in his photo-ops with Jewish politicians, I see a people craving security as a bandaid to our trauma. We, after so many centuries of pain, cling even to anti-Semites who call themselves allies.

But this isn’t the way forward for our healing or our survival. We in IfNotNow refuse to accept the compromises that Jewish leaders have made on our behalf. We believe that CUFI’s anti-Arab incitement, Palestinian erasure, and war-mongering should’ve each have been enough to withdraw our support long ago. The fact that we are asked to accept anti-Semitism, too, for the sake of endless occupation, shows just how low we’ve sunk.

We will not sink to hatred for a false security. We demand that either our institutions refuse CUFI’s support, or lose a generation of young Jews who will not uphold this moral catastrophe.

Benjamin Koatz is a graduate of Brown University and a half-Ashkenazi, half-Sephardi, first-generation New Yorker.