Why Did Trump Praise His Granddaughter’s ‘Smart Genes’? 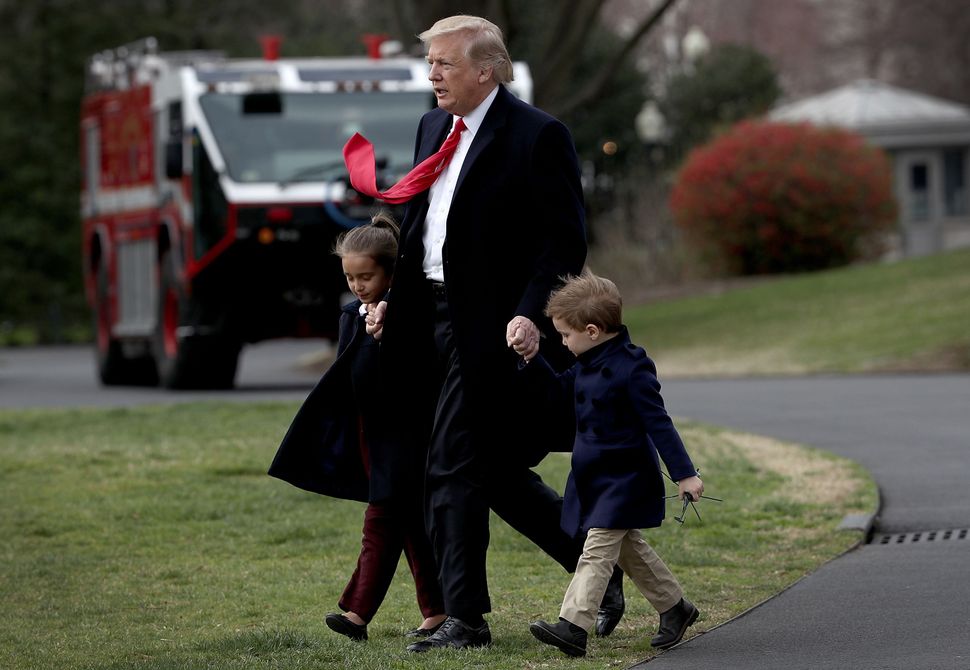 It was among the oddest asides in an exceedingly odd interview by the New York Times with the president of the United States.

When presidential granddaughter Arabella Kushner burst into the meeting, Trump paused to show off the photogenic little girl. Like any doting grandfather, he took the opportunity to boast about Arabella’s intelligence, prompting her to speak a few words of Mandarin to the visiting reporters.

“Say, like, ‘I love you, Grandpa,’” the president requested.

Turning back to the Times reporters, Trump made a strange remark, attributing the rising first-grader’s linguistic skills not to hard work or preternatural smarts, but to the quality of her breeding.

The comment reflected Trump’s longstanding obsession with genes — both his own, and of those around him. It was unclear if the boast was a statement about his own genetic fitness, that of her parents, or some combination thereof.

Arabella is the eldest child of his daughter, Ivanka, a successful entrepreneur, and White House senior advisor Jared Kushner, who is the scion of a wealthy Jewish real estate family. Trump has often praised Jared Kushner for his intelligence.

Whatever he meant, Trump’s praise of his granddaughter’s genes is in line with the president’s insistence on genetic determinism, and his specific belief in the superior quality of his own genetic makeup.

It’s a preoccupation that has raised concerns from critics who say that the president’s apparent fascination with human breeding carries uncomfortable echoes of eugenics, which was a pillar of Nazism, and of contemporary racist ideologies that use the language of genetics to argue for white racial superiority.

The Southern Poverty Law Center’s Ryan Lenz suggested that Trump’s repeated comments on genes could be a “dog whistle” to white supremacists in a 2016 interview with the leftist website ThinkProgress.

“It has happened so many times now that if it’s not a strategy, it’s certainly a pattern,” Lenz said.

The comments come as so-called “scientific racism” gains new adherents among emerging political movements on the far right. Those groups overwhelmingly backed Trump in the 2016 election, and have reveled in newfound power and influence in his young administration.

Still, it’s clear that Trump’s beliefs about his own genes far predate his political aspirations.

“The [Trump] family subscribes to a racehorse theory of human development,” Trump biographer Michael D’Antonio told PBS’s Frontline last year. “They believe that there are superior people, and that if you put together the genes of a superior woman and a superior man, you get a superior offspring.”

Trump has often described himself as among the genetically blessed. “I have a certain gene,” he said on CNN in 2010. “Hey, when you connect two race horses, you usually end up with a fast horse.”

A New Yorker essay last April identified Trump’s uncle, an engineering professor at the Massachusetts Institute of Technology, as the focus of many of Trump’s own claims of his genetic superiority. The article cites, among other instances, an interview with the Boston Globe in which Trump said: “My father’s brother was a brilliant man…We have very good genetics.”

The Huffington Post put together a supercut in 2016 of Trump boasting about his genes, and generally insisting that some people have better genes than others.

Since reaching the White House, the belief that Trump genes are superior seems to have metastasized throughout the president’s inner circle. In March, Treasury Secretary Steve Mnuchin, who is also Jewish, told Axios’ Mike Allen that Trump’s health was due to his “perfect genes.”

“What do you mean by that?” Allen asked, half-laughing.

Why Did Trump Praise His Granddaughter’s ‘Smart Genes’?