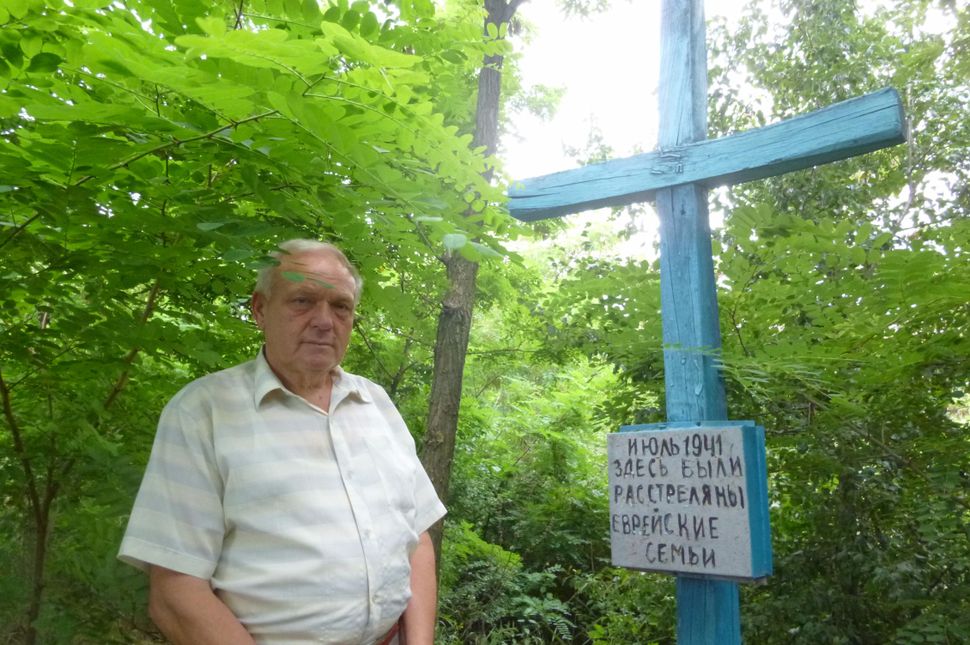 Village school principal Ivan Timoshko stands next to the memorial he and his students built for the Jews massacred there during World War II. Image by Julie Masis

When school principal Ivan Timoshko decided to do something to mark the spot in his village where dozens of Jews were executed by the Nazis, he did it the only way he knew how: He built a cross.

Together with the children from his school in the village, he cut down an acacia tree, chopped away the branches and erected a 3-meter-high cross on the top of a hill, just above a ravine into which the bodies fell. He painted the cross bright blue, simply because that was the only color he had. To this cross he attached a wooden board with handwritten words: “Jewish families were executed on this spot by the Nazis.”

“We didn’t know that the Jewish custom is to put a six-pointed star on the grave,” he said. “We did what we could do by ourselves; we didn’t have any financial help.”

There are a few similar monuments in villages and small towns in Belarus, Ukraine and Russia — although the phenomenon has remained largely unknown until now. Experts who have glimpsed these rare memorials say they are created with the best of intentions, but some Jewish leaders in the former Soviet Union object to the crosses.

According to the Yad Vashem museum’s database, Romanian fascists murdered almost 100 Jews in Stolichani, which sits in the north of Moldova, near the Romanian border, in July 1941. One of the peasants witnessed the massacre as it happened: The Romanian fascists forced Jewish children, women and the elderly into the forest, lined them up and began shooting. Many people who fell were only injured. But for days, the soldiers guarded the spot so that no one could come to help the injured, Timoshko said.

It is hard to imagine that something so terrible could have happened here: Cherry and apple trees grow all around, fat rabbits jump into the bushes when they hear someone approaching, and sunflower fields beg to be photographed. But the villagers remembered exactly where the Jews were murdered, because after the war they planted poplar trees to mark the spot, Timoshko said. He still uses these tall trees as a guide when he tries to find his cross, because it is hard to see it from the road.

“There are just a handful of these monuments because most of the [Holocaust] monuments are built by Jews,” said Arkadi Zeltser, director of the Center for Research on the Holocaust in the Soviet Union at the Yad Vashem museum in Israel. “Most likely, they were built by local activists. The authorities probably didn’t build them.”

He said he knows of two more such monuments — in Cherikov, Belarus, and in Yudendorf, in Crimea, where the Holocaust monument has a Christian cross on one side and a Jewish star on the other. He said there might be one or two more similar monuments in Russia. In Cherikov, Belarus, on the spot where between 300 and 500 Jews were executed in the fall of 1941, a monument with a cross was built after the original monument was vandalized in the 1980s, according to information on the Yad Vashem’s website.

This journalist independently discovered three more Holocaust monuments with Christian symbols in Petrikov, Begoml and Anatovka in Belarus and one more in Moldova – all of them built after the fall of the Soviet Union.

“It’s a new phenomenon, in Soviet times this didn’t happen,” Zeltser said. “Now it’s the new generation who believe that it’s not good when a grave of hundreds of people isn’t taken care of. So they put a monument in accordance with their own ideas of how to take care of these places.”

Indeed, people in Stolnichani always wanted to build some kind of monument, Timoshko said, a 69-year-old communist and the son of a World War II veteran — but no one took the initiative until he became the principal of the school.

“We had a discussion with the children in our village, so afterwards we decided to mark the spot,” he said.

Zeltser said he does not think such monuments are anti-Semitic or intentionally meant to erase the memory of genocide against the Jews.

“If they wanted to forget that Jews were killed there, they wouldn’t put a monument at all. When people put in their own money and their effort – I don’t think those people wanted to forget that Jews were executed there,” he said. “Do you think they know that Jews don’t put a cross on the grave? I am not sure. Believe me, it doesn’t even occur to them that for Jews it might be offensive.”

But others in the Jewish community said a cross that marks the spot where Jews were killed is not historically inaccurate and is disrespectful to those who died.

Boris Bruk, who helped to build 17 Holocaust monuments in Belarus in recent years, said it’s important that the word “Jew” be written clearly on memorials.

In particular, the Jewish community in Belarus is working to replace the old description of the victims as “Soviet citizens” with the word “Jews.”

“If it’s only a cross and Jews are buried there, we are not happy about that,” Bruk said. “It’s not right. It creates the wrong impression about who was executed there. It needs to be changed.”

A cross that stands on a Jewish grave is problematic from a religious standpoint as well, said Boleslav Kapulkin, spokesman for the Chabad Lubavitch community in Odessa, Ukraine. Jewish souls can’t rest in graves marked by the symbol of a foreign religion, he said.

Then, too, the people who murdered the Jews were Christians.

“I can understand the reaction of the Jewish community to Holocaust monuments that are built by Christians because the Germans were Christians and the Nazi uniforms had the inscription, ‘God is with us,’” said Hanna Wegrzynek, the chief specialist in the research department at the Polin Museum of Jewish history. in Poland.

But in Moldova, the response has been more positive.

“If Christians honor the memory of their Jewish neighbors in a fashion which is familiar to them, that’s a very wonderful thing,” said Irina Shihova, curator of Moldova’s Jewish Heritage Museum.

While there are no Jews left in the village of Stolnichani, Leon Akerman, who is one of the 10Jews who still lives in the nearby town of Edenits, said he sees nothing wrong with a cross that marks the spot where a massacre took place.

“It’s better than nothing,” said Akerman, 72, whose grandparents, aunt and uncle were murdered during the Holocaust. “A lot of places where people were executed have no monuments at all, a lot of places have been forgotten.”

For instance, retired city councilor Iurii Zagorcea, who is Christian, has erected five Holocaust monuments in northern Moldova and has lobbied the president of Moldova to include a unit on the Holocaust in the country’s schoolbooks. In the coming years he hopes to build five more Holocaust monuments.

“My goal is to educate the future generations so that it doesn’t happen again,” he said. “We must tell the truth – so that people see the stones and they will know what happened here.”

Most of the monuments he built have the Star of David on them, but one – in the village of Terebna – features a cross on the left side with the names of the six Christian soldiers who were executed by fascists, and on the right a six-pointed star for the 64 Jewish victims from the same village.

Next to this monument stands a tall cross.

“People ask why we put a cross there,” Zagorcea said. “It is our custom to put a cross in the honorary place at the entrance to the village. It shows the respect of the local people to those who were killed.”