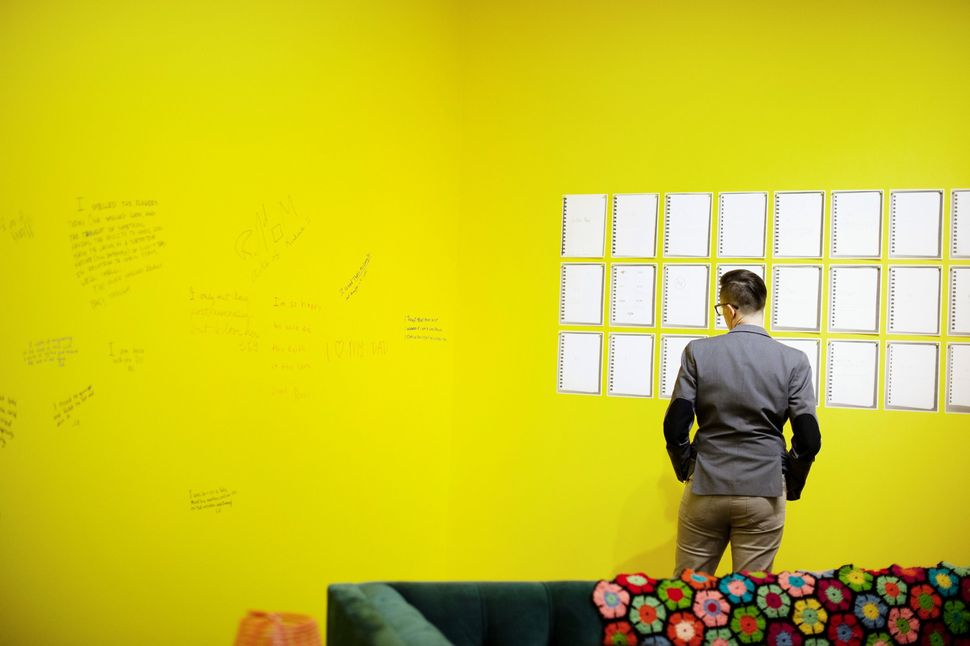 Amy Krouse Rosenthal was a planner, the sort of person who always kept a sketchbook with her where she could jot down sketches and ideas and make lists of all the things she was going to do. And she did a lot. She was an essayist, the author of 28 children’s books and a creator of interactive art events that brought people together. When she died of ovarian cancer in March at age 51 — just 10 days after The New York Times published her now-acclaimed essay in which she composed a personal ad to find someone who would love her husband after she was gone — she was widely mourned, even by people who had never known her.

It’s unsurprising that, in those notebooks, Rosenthal left behind plans for many books and projects. Seven more children’s books are forthcoming. But first, another of Rosenthal’s interactive events, “AKR: A Beauty Salon,” is now open at the Carrie Secrist Gallery in Chicago’s West Loop.

“AKR: A Beauty Salon” is not a memorial, exactly, said Rosenthal’s assistant, Ruby Western, who curated the event in collaboration with Secrist, the gallery owner, and two of Rosenthal’s dear friends, Brooke Hummer and Merrill Smith. Rosenthal had begun planning the beauty salon in early 2016. She had the idea that it would be a “salon” in the 18th century sense, a place for people to meet and talk and create works of beauty, something that was necessary in hairy times. She’d already met Secrist at a garden party, and the two had decided they wanted to collaborate.

“Once she realized she would be passing soon,” said Western, “it had a very different feel. But it’s not a retrospective. For those of us who knew and loved her, that didn’t feel like a project we should do. Then we remembered the idea of the beauty salon.”

The exhibition is filled with Rosenthal-like touches. At the entrance is a small fountain with a jar full of pennies; visitors are instructed to take a penny and then, as they leave, make a wish for someone with whom they’d had a conversation. There is a toy vending machine that spits out plastic eggs, each containing a temporary tattoo and a mission. (“Do nothing. You have until 5 o’clock on Thursday.”) There are reading nooks where visitors are encouraged to sit and read or create something. The sign above the door says “Excite” instead of “Exit” because Rosenthal thought that was a better way to leave an art exhibit.

But there are many other things that have a memorial feel. There’s a glass cube filled with Rosenthal’s notebooks and papers covered with her tidy handwriting, containing, as Western puts it, “Good ideas, bad ideas, things that became things, things that didn’t.” The papers span Rosenthal’s career, from the early cartoons she drew for Might magazine in the 90s to her most recent notebook, half-filled, in which she’d written, “Death may be knocking on my door, but I’m not getting out of this hot bath to answer it.” Pinned to one wall is an early draft of Rosenthal’s first children’s book, “Little Pea,” about a pea who won’t get spinach for dessert until he eats all his candy. (It was inspired by a story Rosenthal told her daughter.)

The reading nooks are replicas of spaces that were important to Rosenthal: the couches and chairs are much like those in her favorite coffeehouse, where she and Western used to spend hours sitting and talking and working; the picnic table with swings instead of benches is similar to the table Rosenthal had in her backyard. Rosenthal’s books are scattered around the exhibit: not only her children’s books, but also her two memoirs, “Encyclopedia of an Ordinary Life” and last year’s “Textbook Amy Krouse Rosenthal.” In a tiny room in the back, five videos of her various interactive projects run on a continuous loop. There are also jars of lemon drops, which she always kept on the coffee table in her living room, and a Keurig machine because she could not live without coffee. (Her own tastes were very particular: She preferred Major Dickason’s Blend from Peet’s with almond milk and coconut palm sugar.)

The most striking part of the exhibit, however, is the rear wall, painted bright yellow, upon which visitors are invited to write or draw something. The prompt changes every week. The first one was a line from “Textbook Amy Krouse Rosenthal”: “I was here, you see. I was”.

The wall is now covered with visitors’ attempts to document their own lives in the early 21st century, from the mundane to the monumental. “I cut my hair myself,” someone wrote. “Me, too,” someone else added. “Not my best work.” “I whistled four songs at a dear friend’s birthday party.” “I fell in love and you helped … big time. Thank you.” 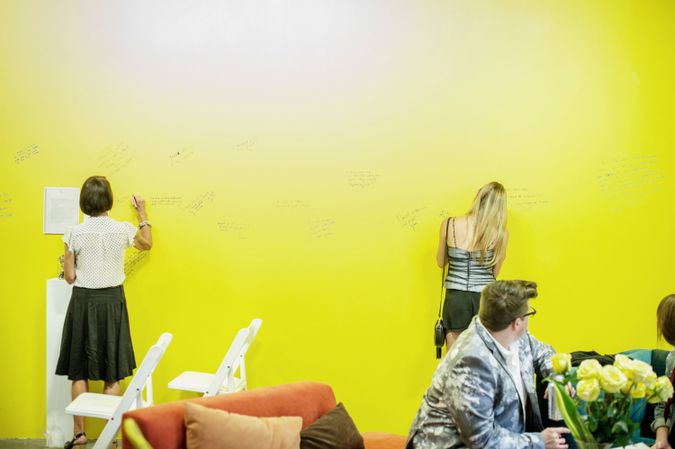 The exhibit opened on July 8 with a fundraising event for the AKR Umbrella Foundation, which benefits children’s literature and ovarian cancer research. (Rosenthal used a yellow umbrella to identify herself to participants at one of her most successful events, 2008’s “The Beckoning of Lovely,” and it became a personal symbol.) On August 9, which Mayor Rahm Emanuel declared Amy Krouse Rosenthal Day, there will be a celebration beginning at the “Cloud Gate” sculpture in Millennium Park, and continuing with a parade to the gallery, about a mile away, where there will be yoga classes, musical performances and talks by some of Rosenthal’s collaborators, including Tom Lichtenheld, who illustrated five of her books, and Western herself.

Western became Rosenthal’s assistant in the fall of 2013 after she answered a Craigslist ad. Her duties ranged from helping with graphic design and planning school visits to walking the dog and helping Rosenthal dye her hair. “The Venn diagram of person and professional became a circle very quickly,” she said. Like three of her predecessors, she got a tattoo in tribute to Rosenthal: in her case, an image of Rosenthal’s stick figure self-portrait. In her bag, she carries a jar Rosenthal gave her “in case of emergency (excessive tears).” It contains, among other things, a packet of tissues and a bouncy stress ball.

In “Textbook Amy Krouse Rosenthal,” Rosenthal wrote about how, right after she turned 40, she would often be moved to tears by how quickly time was passing: “At the very least, I want to look at trees a million more times. Is that too much to ask?”

“She appreciated and gave weight to every moment,” Western said. “She had an active appreciation of where she was. Now everything is flavored by the fact that she did die early, but it’s important to read it without that lens. Her writing was about living, not dying.”

“AKR: A Beauty Salon” creates a mood that makes you feel like appreciating the moment, too, and maybe even creating something beautiful. People tend to linger there; an average visit lasts between 10 and 15 minutes, as opposed to between one and five minutes for a typical exhibit. One visitor brought in a laptop and was sitting on one of the bright yellow beanbags in the corner typing. She may be a manifestation of Western’s own hopes. “I wish,” she said, “that over the course of the exhibit, one person works on something they feel excited about.”

Correction: This article has been changed to clarify that Ruby Western did not believe Rosenthal’s writing contained any premonition that she would die early.