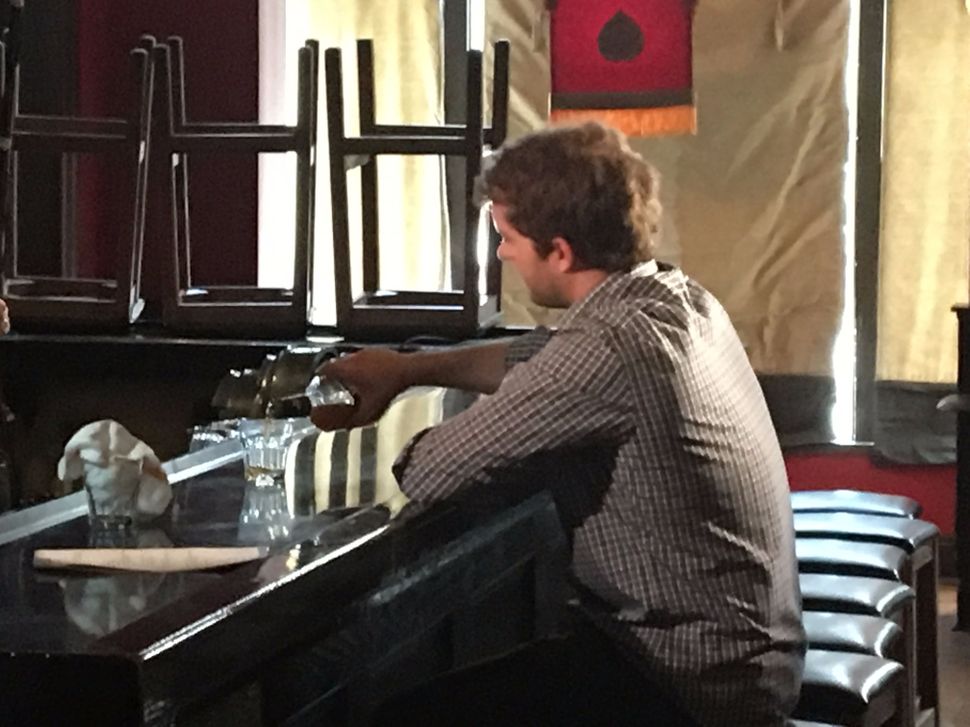 An actor depicting Seth Rich during the filming of a reenactment of Rich’s murder, August 1, 2017 Image by Nathan Guttman

In an empty Washington bar on a steamy summer afternoon, a young actor tasked with playing the role of slain DNC staffer Seth Rich is leaning on the counter, downing one shot after the other.

“Are you okay, son?,” the actor playing the bartender asks, refusing to pour him another round. “Yeah, I’m okay,” he answers. “No, no, I’m not. Things at work, and I just don’t have money, not the kind I need. Kelsey moved to New York and you know how much it frigging costs to live in Brooklyn. But I got a plan. I got a plan.”

This imagined dialogue is part of a low-budget video production aimed at re-enacting the final hours in the life of Rich, who was murdered not far from his Washington home in the early morning hours of July 10 last year. The re-enactment promotes the right-wing theory that he was killed not in the course of a botched robbery, but because he was involved in leaking the Democratic Party’s emails.

“Any reenactment is, of course, a theory. It’s the advancement of a theory, to be sure,” said Jack Burkman, a Republican lobbyist and lawyer and, now, filmmaker, in an interview on the side of the set. “I don’t know what a conspiracy theory is. The only thing this is designed to do is get to the bottom of it.”

Clad in what he called his “film director outfit” of shorts and an orange T-shirt, Burkman said filming his take on the case will help solve the murder. The notion that Rich was killed by vengeful Democrats or evil Russians — which both his parents and the D.C. police dispute — is fast becoming enshrined in the cannon of conspiracy theories. Americans variously believe that a mystery gunman shot John F. Kennedy; that the government faked both the moon landing and the massacre at Sandy Hook Elementary School, and that the Mossad engineered the attacks of 9/11.

Now many of them also claim that Rich — code name “Panda” — was the source for WikiLeaks’ Hillary Clinton e-mail dump last summer.

When people say you can’t prove Seth Rich was Panda, yes we can #SethRich pic.twitter.com/iLITJszyhA

The actor playing Rich in Burkman’s reenactment refused to give his name. The person playing the bartender warned reporters not to include him in photographs. The director, who also doubles as the cameraman, was likewise curt. “I’m not going to comment. This is Jack’s production.” 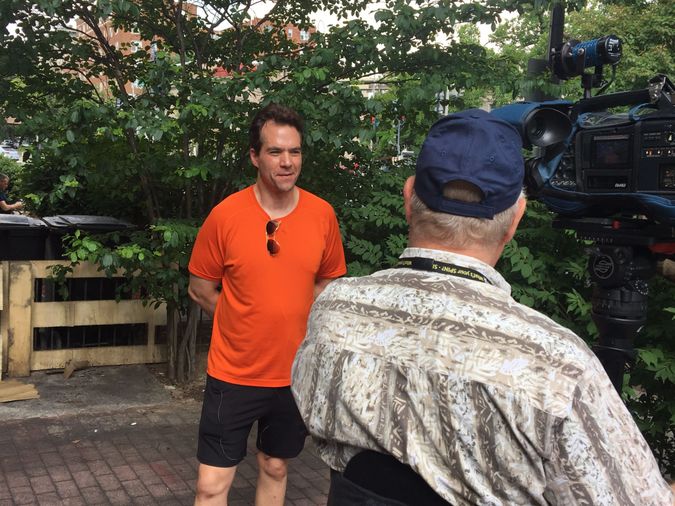 In filming and distributing a re-enactment, Burkman is using a tactic common to contemporary conspiracy theorists and TV shows that wish to promote the belief that a complicated, alternative version of events is the true one, explained Chip Berlet, who is a journalist and scholar who researches conspiracy theories and former senior analyst at Political Research Associates, a not-for-profit organization studying right-wing extremism.

Indeed, just hours before Burkman started filming, Fox News contributor Rod Wheeler filed a lawsuit accusing the network and the White House of promoting conspiracy theories regarding Rich’s murder. Wheeler claims that Fox News and a top Trump campaign donor worked together to promote a false story claiming the FBI has evidence tying Rich to the WikiLeaks email leak from the Democratic National Committee. According to the lawsuit, Trump’s White House knew of the upcoming report and pushed Fox to run it.

White House spokesperson Sarah Huckabee-Sanders said Tuesday she was “not sure” whether President Trump believes in the conspiracy theory tying Rich’s murder to the DNC email hack.

Fox News later retracted the story, but Burkman’s script keeps it alive. His made-up dialogue implies the existence of a sinister mystery — the need for money, the mysterious late-night meeting, the secret plan he had hatched.

Burkman says he wants to discover the truth, whatever it is, but re-enactments don’t work that way, Berlet said, they buttress existing fantasies.

“It’s irresponsible,” he said. “For those who already believe there is a conspiracy, the visual re-enactment only cements that idea.”

Re-enactments, Burkman argued, are a well-known practice used in unsolved crimes. “The purpose of a re-enactment is to jog the memory of the community,” he said. Once production work is done, Burkman intends to circulate the re-enactment scenes online and on social media in hope that the film will induce those who have useful information to come forward.

For the Rich family, this is yet another hurtful stunt.

“It’s one of the most revolting, repulsive and twisted things I’ve seen,” Aaron Rich, Seth’s brother, told the Forward after watching a clip from the re-enactment. “It’s obvious from the creative liberty taken in the absence of facts, this was done purely to push a conspiracy theory and not search for true answers.” Aaron Rich called the re-enactment an “absolutely grotesque publicity stunt.”

When Burkman stepped onto the scene last October, he was embraced by the Rich family, who had believed his enthusiasm and fresh approach could help provide answers to the questions still haunting them. But as Burkman began to explore, and to publicly spread, theories regarding their son’s alleged ties with the Russians, the family broke ties, making clear that they see his actions as hurtful and unhelpful.

Burkman, however, still stands behind his belief that Rich’s murder was tied directly to some sort of connection to Russian agents. His latest piece of information, Burkman said, indicates Rich was in contact with a Russian lawyer who has captured the headlines in recent weeks.

“A source well placed within the Democratic National Committee told us that Seth, four to six weeks before he died, met with Natalia V., I can’t pronounce the last name —- the lawyer who had met with Trump Jr.,” Burkman said. Natalia Veselnitskaya, the Russian lawyer who made news after offering Donald Trump Jr. and other top campaign officials damning information about Hillary Clinton in a pre-election meeting, denied ever meeting Rich. “I have no idea who Seth is,” she wrote on Facebook.

Aaron Rich added that he had never heard anything from his brother to support Burkman’s claim: “There’s absolutely no truth to that.”

Asked by the Forward who he believes is behind Rich’s murder, Burkman kept his focus on Russia, at least for now.

“Now it’s up to the whodunit. It’s a premeditated homicide in a high level. Who did it? It could be the Russians. Is it the DNC? is it somebody else? Right now we’re particularly interested in this Russian angle, but we’re investigating all the angles.” 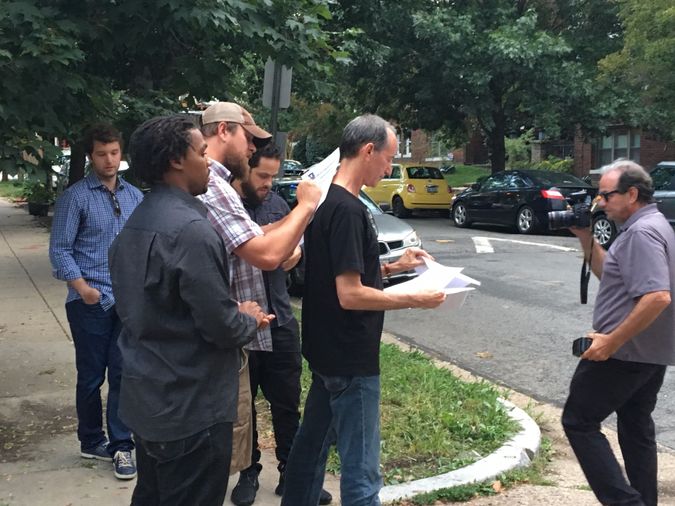 Actors and crew preparing for shooting of final scene in reenactment of Seth Rich’s murder, August 1, 2017 Image by Nathan Guttman

After dark, the small film crew, accompanied by half a dozen reporters, gathered on a quiet street in Washington’s Bloomingdale neighborhood to shoot the re-enactment’s final scene – Seth Rich’s murder. The script leaves no room for misunderstanding — this, according to Burkman, was in no way a simple case of a late-night robbery gone bad.

The actor playing Rich slowly walks down Flagler Street, on the same block where the murder actually took place. Two other actors show up from around the corner and approach him. “What do you want? Take my wallet. You want my phone?” the actor offers, but the assailants just push him forward. “Walk, walk,” they order him. And then the conspiracy thread kicks back in. “You guys, you’re safe,” the actor playing Rich whispers, “you’re safe. I took all the necessary precautions.” But they just push him ahead. “Boom, boom,” they call, as the scene ends with two shots leaving Rich lying on the ground.

In the year that has passed since the murder, no significant lead has surfaced, feeding skepticism about the robbery theory. Burkman and the Profiling Project, a group he set up that issued an 80-page report arguing that the murder could not have been a random robbery, say the fact that Rich’s wallet and phone were not taken indicate that robbery was not the motivation. In May, Burkman sued the DC Metropolitan Police Department demanding that it release reports of ballistic experts and of the medical examiner in the Rich case. Police sources have told the Forward that withholding investigation information from the public is a common practice. The D.C. police said, in response to Burkman’s claims: “MPD stands behind its original assertion that Seth Rich was the victim of a botched armed robbery. Out of respect for the Rich family, we will not engage in conspiracy theories surrounding his death.”

The Rich family also still believes the perpetrators of the murder wanted to rob Rich, and that they will be found.

“We knew it would take time,” Aaron Rich said. “We still have full faith and confidence in the Metropolitan Police.”