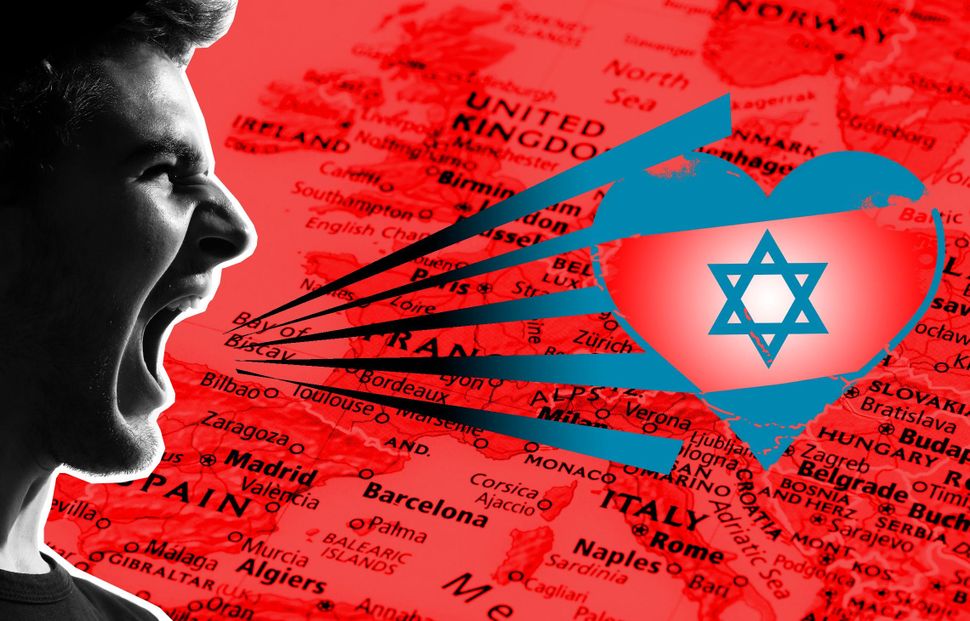 European far-right political parties have supported Israel to help them shed “the baggage of anti-Semitism,” said Bernhard Weidinger, a researcher on right-wing extremism at the Documentation Center of the Austrian Resistance in Vienna. Image by Nikki Casey

Last year, a website known for being pro-Israel referred to the political commentator Bill Kristol as a “renegade Jew.”

The website, Breitbart News, was co-founded by a Jewish lawyer, has an office in Jerusalem and calls itself “unapologetically” pro-Israel.

Across Western Europe, this phenomenon of being both pro-Israel and anti-Semitic has also appeared among political parties on the right.

This phenomenon, which may seem contradictory, is part of a deliberate strategy on the far-right in Europe to shed perceptions of anti-Semitism, attract broader legitimacy and support and advance a political agenda against Islam. For some European Jews, it represents a cause for concern and a threat to diaspora communities.

In 2013, a government minister in Northern Ireland compared abortion to the Holocaust.

“In the West, we have destroyed more viable human life than Hitler ever put into a gas chamber,” said Jonathan Bell at a government debate on abortion (which is illegal in Northern Ireland).

Four years later, the Board of Deputies for British Jews—the main representative body for the UK Jewish community—endorsed an alliance between Mr. Bell’s Democratic Unionist Party (DUP) and the UK Conservative Party, to give them a parliamentary majority after the recent elections.

Why the endorsement? The DUP is pro-Israel.

Yet other members of the European Jewish community—whether motivated by Zionism, right-wing political beliefs or concerns about Islam—have welcomed these parties’ public support for Israel and become supporters themselves. Some Jews have even joined the parties, such as David Lasar, a prominent member of Austria’s Freedom Party, and Gidi Markuszower, a Senator for the Dutch Party for Freedom.

“But you know, there’s something actually illogical about the equation.”

Far-right parties in France, Austria, the Netherlands and elsewhere have pursued a strategy of supporting Israel to help them shed “the baggage of anti-Semitism,” says Bernhard Weidinger, a researcher on right-wing extremism at the Documentation Center of the Austrian Resistance in Vienna.

The Freedom Party of Austria (FPÖ), founded by former Nazis in 1956, now calls itself a “friend of Israel” and is working to improve relations with the Israeli government (which refuses to hold official meetings with them).

Geert Wilders, leader of the Dutch Party for Freedom (PVV), lived on a kibbutz after high school, supports a one-state solution and proposed moving the Dutch embassy in Israel to Jerusalem.

She also expelled her father Jean-Marie from the party he founded in 1972, over his repeated anti-Semitic remark that the Holocaust was “a detail of history.”

“She does not deny the Holocaust: she’s not like her father,” said Jean-Yves Camus, Director of the Observatory of Political Radicalism at The Jean Jaurès Foundation in Paris, over lunch last Friday at an event on the state of the international far-right in London.

In continental Europe, allying with Israel is also a way to advance an anti-Muslim agenda. For far-right leaders, Islam and its adherents—be they immigrants or European-born—have become the new target for scapegoating and discrimination.

So these leaders have found an ally, and a model, in the Israeli government’s narrative of Israel as “the bulwark of Western civilization in the midst of Muslim barbarism,” as Mr. Weidinger puts it.

Mr. Wilders argues that both Muslim newcomers and established Turkish- and Moroccan-Dutch communities present a threat to the Netherlands’ “Judeo-Christian” identity.

Eric Krebbers and Jennifer van Leijen, from Dutch anti-racism organization Doorbraak, say this nationalist identity ignores 2,000 years of Christian persecution toward Dutch Jews, and is a way to exclude Muslims.

“If you ask Jewish people, it’s a meaningless term,” says Ms. van Leijen. “They don’t really like the fact that he’s hijacking our identity to do that.”

And when it comes to proposing or voting on legislation, Mr. Wilders’ talk of “Judeo-Christian identity” fails to translate into action. For example, the PVV has supported a proposed ban on “ritual slaughter” without sedation (affecting both Muslim and Jewish practices).

“They’re not really against anti-Semitism as much as they are against Islam,” says Mr. Krebbers.

In Austria, the FPÖ uses the issue of anti-Semitism as a way to scapegoat Muslims. Mr. Weidinger says the party claims that Muslim immigrants have “introduced” present-day anti-Semitism to Austria, and that it no longer exists among “native” Austrians—which absolves non-Muslim Austrians of any prejudice or responsibility.

As for Ms. Le Pen, Mr. Camus believes her support for Israel depends on who is in power and whether the government continues to ally with her worldview.

“It’s a pro-Israel party as long as the right is in power in Israel, and as long as Israel fights the neighboring states and the Palestinians, and fights the terrorism movement that comes from an Islamic background,” he says.

One reason that some French Jews support her, he says, is that they agree about the reasons for and solutions to extremist violence. He notes that most French Jews had to leave their home countries in North Africa in the 1960s, after they gained independence from France.

“So they have a very specific past of confrontation with Muslims—or they believe,” he says.

“There are Jews who say, ‘What is the best party if we really want to get rid of terrorism and to get rid of Muslims?’—because it amounts to that. It’s the National Front.”

Sources do not believe these far-right leaders in continental Europe are openly anti-Semitic. Yet their words and actions suggest their anti-Semitism may simply be less overt than in the past.

In Austria and the Netherlands, far-right party members have worn nationalist symbols that some (but not all) consider anti-Semitic.

In the Netherlands, PVV members have worn the Prinsenvlag (Prince’s Flag) on their lapels in parliament. This white, blue and orange flag, originally representing the Dutch monarchy, was worn by National Socialists in the Netherlands.

In Austria, FPÖ leader Heinz-Christian Strache shared a cartoon on Facebook in 2012 showing a large-nosed man with Star of David cufflinks representing “the banks.” (He was charged with incitement of racial hatred, but the charges were dropped.) In a recent interview, Strache described French President Emmanuel Macron as a “Rothschild banker.”

Ms. Le Pen supports a ban on wearing kippot in public (the niqab and burka are already banned) and has denied France’s involvement in deporting Jews during the Holocaust.

Mr. Camus denies she is anti-Semitic, however.

“She has no prejudice against those Jews who wear a kippah on the street,” he says. “But she’s asking us to, I would say, restrict your own freedom of religion and your freedom of speech in order to fight what she believes is our common enemy.”

“It’s fairly widely perceived that it’s not so much about being pro-Israel: it’s about being anti-nationalist,” she says. “It’s useful on the DUP’s terms, not on Jewish terms or Israel’s terms.” (Fewer than 1,000 Jews live in Northern Ireland, out of 1.8 million people.)

There is also a historical link: The British modeled Jewish settlement in Palestine after their Protestant settlement in Northern Ireland, and in the 1920s referred to Palestine as “a ‘little loyal Jewish Ulster’ in a sea of potentially hostile Arabism.”

Gary Spedding, a consultant and activist on Israel-Palestine who has lived in Northern Ireland, says some DUP members are pro-Israel for religious reasons—believing that Jews need to live in Israel to bring about the Second Coming, and Northern Irish unionists are the Lost Tribe of Israel. (The DUP is a fundamentalist Christian party.)

Some in the European Jewish community say that institutional support for, or tolerance of, pro-Israel and anti-Semitic parties makes them feel unrepresented and concerned, since it prioritizes support for Israel over anti-Semitism in the diaspora.

Mr. Spedding notes that members of the British far-right have explicitly stated that they cannot be anti-Semitic if they are pro-Israel. “That’s very dangerous for Jewish communities in the UK and in Europe,” he says. “Because the reality of anti-Semitism is, it makes [them] feel unwelcome as part of our countries and part of our communities.”

Ms. Bird believes that, though Muslims, people of color and the LGBTQ community are the main targets of discrimination in Northern Ireland, Jewish institutions should ally with them—rather than the far-right—because the far-right threatens all minorities.

“The Nazi groups attack all of those groups kind of equally, and our best defence against that is to form broad alliances, not just protect our own self-interested group,” she says.