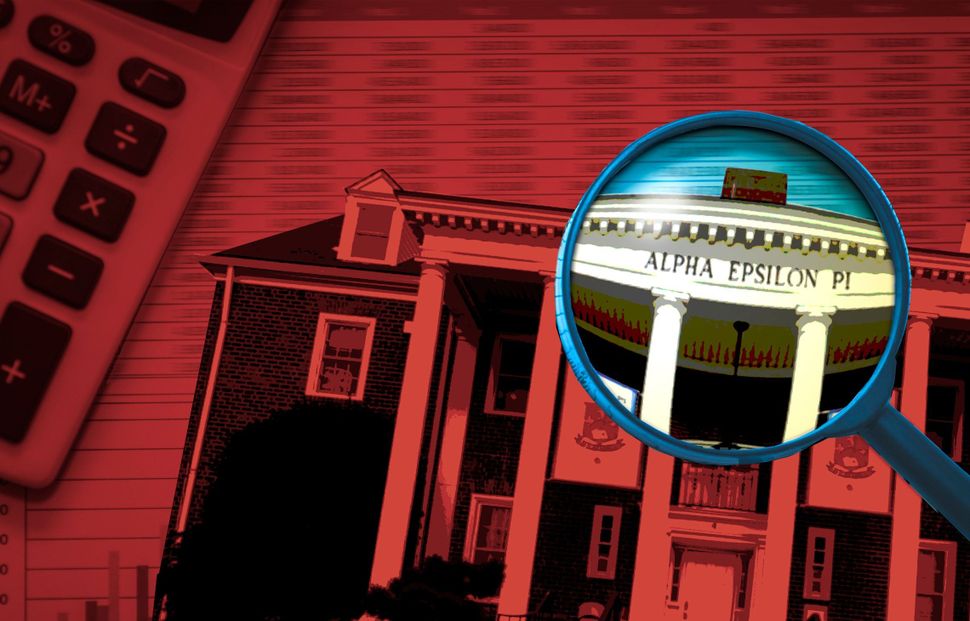 Alpha Epsilon Pi, the largest Jewish fraternity in America — and the ninth largest overall — has been hit with two high-level resignations. And in both cases, financial questions and basic issues of transparency appear to have played a key role.

The departure of Michael Fishel, the national organization’s president-elect and No. 2 officer, was the more dramatic of the two: He resigned July 18 in a bitter email exchange after his frat brothers on the group’s Supreme Board of Governors issued a vote of no confidence in him.

Barry Schwartz, who was treasurer of the AEPi Foundation, which raises money for the group, left more decorously in June.

How this will affect the 190 active chapters AEPi claims to have on campuses in America and around the world is uncertain. Some of them have recently had problems of their own. But the financial questions that Fishel raised, and that his fellow board members rejected, may involve the substantial dues AEPi members send in to the national organization. Given the complexity of the issues and the events surrounding them, we’ve boiled down the story into its basic elements for quick reference:

•Fishel says a whistleblowing AEPi employee told him that his beloved fraternity was almost out of cash.

•In response, Fishel asked for copies of AEPi’s current income statement and balance.

•AEPi said it has a policy of not giving out records. It said Fishel could look at them at the group’s headquarters in Indianapolis or wait for an upcoming board meeting, but he could not walk out with copies.

•Fishel insisted on actual copies of the records so that he could consult with others. “I know the red flags of crime and fraud,” he told the Forward.

•AEPi’s Supreme Board of Governors voted “no confidence” in Fishel, and he resigned.

•Schwartz was also unable to obtain financial records, and resigned as well. “I decided I was uncomfortable,” he told the Forward.

•Late-breaking: Fishel reported Wednesday that the fraternity’s Supreme Board of Governors has now formally suspended him from AEPi for “conduct unbecoming a brother.”

Can AEPi deny its board members organizational records?

•AEPi is incorporated in New York, which confers far-reaching rights on corporate board members to obtain any corporate records they deem necessary for their oversight responsibilities.

•According to William Josephson, the former head of New York state’s Charities Bureau, which oversees not-for-profit organizations, those rights extend to obtaining the records, not just to reviewing them in a sequestered room. “There’s no question about this issue,” he told the Forward.

•AEPi spokesman Jonathan Pierce says he has confirmed that his group’s practice is “acceptable and normal” among not-for-profit groups like AEPi.

What’s with the money question?

•Fishel says that 10 years ago, AEPi set up an account of about $2.1 million that was to be reserved exclusively for liability expenses at AEPi campus houses that insurance might not cover. With normal returns on investment and a continuing influx of student fees to the national office, he says, “this fund should be $5 to $6 million today.” So how could AEPi be short of cash, as the internal whistleblower told him?

•AEPi says it’s not short on cash. In fact, its financial position is “stronger than it’s ever been.” Still, the fraternity spent $1 million more than it took in from fiscal years 2011 through 2014, the most recent years for which records are publicly available. It ran deficits in three out of those four years.

•AEPi also says this so-called “risk-management” account was never meant to be “untouchable savings.” It has been used properly over many years to offset “risk management-related” expenses.

•Having suspended Fishel, the fraternity now just wants to put the story behind it.

•New York state’s attorney general has not responded to an email asking what action he might take, if any.