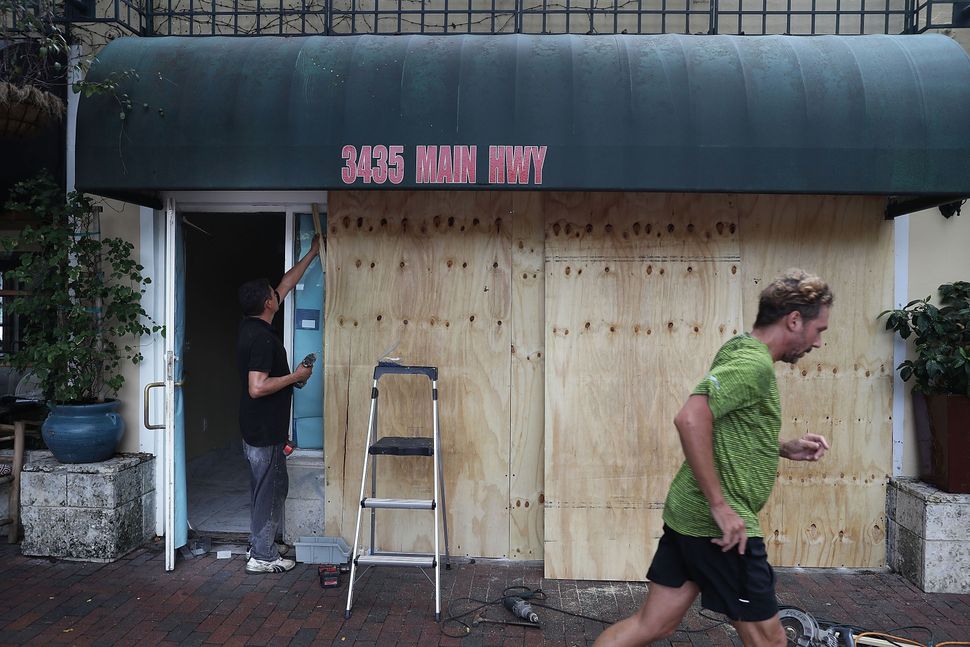 With South Florida in Hurricane Irma’s crosshairs, many in Miami’s Jewish community are staying put for what is shaping up to be a very stormy — and possibly dangerous — Shabbat.

Even as Florida Gov. Rick Scott warned than Irma, a Category 5 storm, may be “bigger, faster and stronger” than Hurricane Andrew, the 1992 storm that led to nearly 100 deaths in Florida, many in Miami who decided to ride out the storm expressed a wait-and-see mentality.

The storm, now just off the coast of Puerto Rico, is expected to reach Miami by Saturday night.

“Right now we’re still on somewhat of a hold. We’re still in watch mode,” said Rabbi Chaim Lipskar of the Rok Family Shul, a Chabad synagogue in downtown Miami. Though the synagogue has canceled the next two days of school, it has not made a decision about whether it will hold Shabbat services.

“We are going to be open as long as the eye of the storm isn’t going to be coming over our area,” he added.

But while synagogues are keeping their options open, they are making sure that members who have not evacuated will be cared for when the storm hits. The Rok Family Shul is currently stocking supplies and has set up hotlines for people, particularly the elderly, with questions about how to stay safe during the storm.

“A lot of people are afraid that if they’re all the way up in the condos, the elevators are not going to work,” Lipskar said.

“We are mobilizing volunteers for anyone that is staying, who may be lonely or may need help,” he added.

Hurricane Irma, now the strongest storm ever recorded in the Atlantic, is moving toward Miami at 15 miles per hour, with the latest models showing that it will mostly like move right up Florida’s east coast.

Meteorologists expect the storm to weaken slightly to a Category 4 by the time it reaches Florida, but that forecast is tempered by models that have the storm making landfall directly over Miami.

While many in Miami’s Jewish community are staying put, a large number have flown out as well. Rabbi Donald Bixon, of Beth Israel Congregation, an Orthodox synagogue, said that rabbis in Atlanta reached out to him with a Google Spreadsheet to keep track of incoming Miamians who were observant of the Sabbath and needed kosher homes to stay in.

“People are concerned where they’re going to be for Shabbos,” Bixon said. “That’s why a lot of people went to Orlando and checked into suites: So there could be a semblance of Shabbos.”

Bixon, like many in his community, said he is staying, at least until Miami-Dade County issues a mandatory evacuation.

“The captain stays with the ship,” he said.

For now, that ship includes people who have been riding out hurricanes for decades. They know what they’re signing up for by deciding to sandbag the house and stay for the duration.

“Anyone who’s staying for Shabbat recognizes that they’re not leaving on Sunday,” he said. “There’s a sense of camaraderie, with the old-timers helping the newbies.”

We’re on standby for when #hurricane #irma hits the Caribbean. https://t.co/AHvnUoN7oR pic.twitter.com/6gz4HHkvUM

Unlike Houston, which suffered a severe lack of kosher food in the aftermath of Hurricane Harvey, Miami is a major distribution center for kosher food, with large kosher wholesaling operations. Many of those facilities are located in inland suburbs of Miami — far from the storm surge zones indicated by the city.

Yossi Rubenstein, the chief operating officer of Prince Distributors, a kosher wholesaler, said that the week had not brought a spike in orders, and that their facility would stay open through Friday and close for the Sabbath.

“It’s just going to have to be a wait-and-see game,” he said. “That’s going to determine how the next week’s going to be.”

Philip Einhorn, owner of the 10,000-square-foot kosher grocery store Kosher Kingdom, agreed with the “day-by-day” sentiment. Though customers are pulling most of the nonperishable food items off the shelf, Einhorn said they still have enough food to last their customers another week.

“We’ll just cross our fingers and hope everything’s going to be okay.

Yakira Navarro, the office manager at Young Israel of Bal Harbour, an Orthodox synagogue, said the synagogue’s leadership is waiting to see what the next round of forecasts brings before deciding to cancel services this weekend.

“It’s a very hard decision, because you want to come and pray, so God will listen and help us,” she said. “But on the other hand, you don’t want to risk the people.”

Navarro, who lives with several members of her extended family, said she had no plans to evacuate, since she didn’t want to risk getting stuck on the side of the highway with a large family to shelter and feed.

“I’m still planning to cook for Shabbat and have a Friday night dinner,” she said. “But we’ll see what God wants.”