These Orthodox Jews Are Openly Marching Against Trump — Despite Taboo 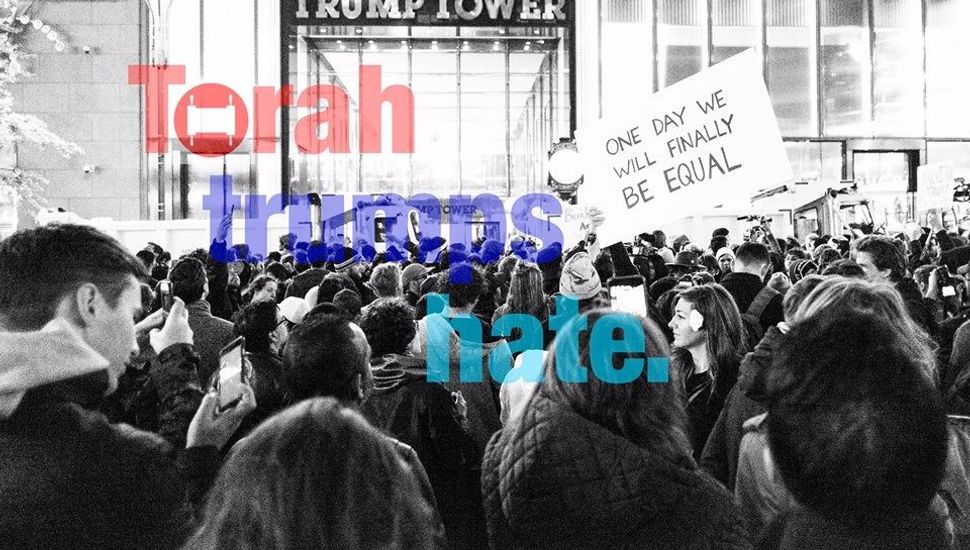 Donald Trump enjoyed majority support from Orthodox Jews during the election. But a growing number of observant Jews are stepping forward to decry the president — and they are going public with their opposition at this weekend’s nationwide protests against racism.

A Facebook group called Torah Trumps Hate, formed days after the election, has mushroomed to 1,800 members. While the group was a private community for months, it has now gone public — and members are participating in their first live protest in New York City.

“A lot of people have never marched before,” said Victoria Cook, the group’s founder. “We’re going to break the myth that religious people don’t have progressive politics.”

Thousands are expected to participate in the March for Racial Justice this weekend and gather in Washington D.C., in Brooklyn and in cities across the country.

“We started from a small group of Orthodox Jews afraid to speak up,” the group wrote on Facebook, announcing its participation in the Brooklyn march. But today “[we are] a group of empowered, passionate, and vocal Jews taking a stand despite what others may say around us. We are here. And we are only growing.”

Cook formed her Facebook group for anti-Trump Orthodox Jews immediately after Trump’s victory in the presidential election, inspired by similar political Facebook groups that she belonged to in support of Hillary Clinton. She said she wanted to create a space for Jews in Orthodox circles to discuss politics freely.

Jews overall voted more than 2-1 against Trump, exit polls showed. But 54% of Orthodox Jews say they voted for Trump, according a recent survey by the American Jewish Committee. That was well above 24% of Conservative Jews and 10% of Reform Jews who backed the Republican candidate.

For the Orthodox Jews who have joined the group in the past few months, Torah Trumps Hate has become a sort of home away from home — where they can talk about the challenges of being Orthodox and politically liberal.

“In a time when I feel completely cut off basically from the frum [observant] community because of my political stances, I now have a Jewish community again,” said Sara Atkins, a mother of five and a member of the Lubavitcher Hasidic community who lives in Philadelphia.

For this reason, the Facebook group was closed for months, meaning members could not be identified publicly and new members would have to be invited to join. This way, they could keep their political views private.

But the explosive white supremacist rally in Charlottesville, Virginia, where white nationalists marched through the city, some giving Nazi salutes and praising Trump, spurred many to come out in the open as anti-Trump.

“Almost overnight, we realized being a support group was not enough,” the Orthoodox blogger Elad Nehorai wrote in Haaretz, describing the group’s decision to go public. “The Orthodox community had been quiet. But we were also an Orthodox community.”

The national march was organized in response to the acquittal of the Minnesota police officer who shot Philando Castile during a traffic stop in 2016 — but activists are also taking the opportunity to protest the Trump administration and agenda more broadly. The protests also mark the anniversary of the Elaine Massacre of 1919, where about 200 black people were killed by white law enforcement and citizens in Arkansas.

The date also coincides with Yom Kippur. Following criticism from Jewish activists, most of the marches were rescheduled for Sunday, although the main Washington event will still be held Saturday.

Protesters in New York will begin gathering in Brooklyn at 12:30 p.m. Sunday at the Jay Street Plaza near the Brooklyn Bridge, and the march will begin at 3 p.m.

The group has already seen some blowback from the decision to march — or to engage in activism at all. “Rallying won’t accomplish anything,” one anonymous critic wrote on Facebook to the group. “If God isn’t in your equation, it is your pitiful illusory image you are defending.”

A page organizer shot back, arguing that the group’s activism can itself be a kind of holy act.

“The Torah gives us mitzvahs to do. Why?… God created an imperfect world so that we can perfect it.”

These Orthodox Jews Are Openly Marching Against Trump — Despite Taboo