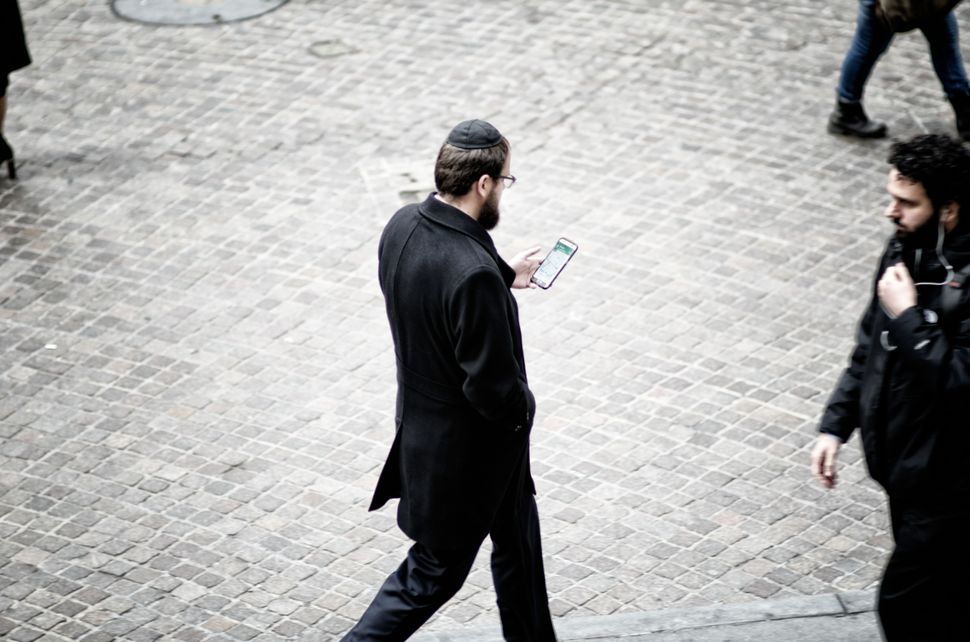 Ever since the election, as an ultra-Orthodox Jewish woman, I was beginning to feel more and more isolated.

In my politically conservative community, too few around me took issue with the saga unfolding in Washington, the racist slogans and shocking vulgarity to emerge from the White House. A few family members (all Hasidim) were my staunch allies, as were two of my modern Orthodox friends, but that was about it.

I soon discovered that even here, there are ripples underneath the surface of the fervently Orthodox Jewish community.

Recently, I was ushered under secrecy into a private Facebook group which was created on November 10, 2016: A clandestine membership created in order to be a virtual gathering place for observant Jews who oppose Trump. Many of these people are Orthodox, some more and some less. They needed a space to share their thoughts and concerns, where they wouldn’t be drowned out by the loud conservative voices in their communities, where they could mobilize to protest and join rallies across the country.

It’s here that they feel safest stating their opinions – because in synagogue sanctuaries and Shabbos tables, this is an unpopular position. According to a poll conducted in August 2016 by the AJC Survey of American Jewish Opinion, Orthodox Jews favored Trump at 50% and Clinton at 21%.

Perhaps most tellingly, Borough Park, a largely Hasidic neighborhood, voted for Trump with an overwhelming 69%. In the ultra-Orthodox burgeoning metropolis of Lakewood, New Jersey, Trump won by a margin of 50.1%, one of the ‘reddest’ townships in all of blue state New Jersey.

But I’ve found a fascinating, underground movement growing on social media and messaging apps. As of mid-August, the private Facebook group I was added to has grown to over 1,300 members.

The most commonly shared theme is angst at the complacency of fellow Jews. Members mourn lost relationships, severed ties, and their inability to relate to close family and friends who no longer share recognizable world-views with them.

The second most common theme in this group is fear for the future and anxiety over how things will play out. As Jewish Americans, this fear has now become more pronounced, with the rise of white supremacism, the silence in the White House, and the President’s alarming response to the KKK and neo-Nazi protest in Virginia.

Amid the despair we felt after Trump’s infamous press conference in which he equated the alt-right with the so-called “alt-left”, group members commented on the first sparks of hope at seeing our Orthodox communities begin stirring. Organizations like the Orthodox Union and the Rabbinical Council of America issued statements condemning violence and calling on the President to “heal the rifts” in this country, while Rabbi Haskel Lookstein, the rabbi who converted Ivanka Trump, wrote a letter to his Upper East Side congregation, condemning the “moral equivalency and equivocation President Trump has offered in his response” to Charlottesville.

The tides may be turning.

Rabbi Yakov Horowitz, a Hasidic rabbi in Monsey, New York and dean of a yeshiva, posted on Facebook on August 16:

“I used this space numerous times during the 2016 campaign to protest and express my deep concerns over Trump’s shameful comments about minority groups. After Election Day, I pulled down all those posts, and hoped against hope that the awesome responsibility of serving as President will bring about positive change in Mr. Trump. That clearly never happened, and I feel compelled at this time to speak out again. I do not think that Mr. Trump has ever internalized the notion that a portion of the population elected him to serve the entire population. I worry about the future of our great country and hope that the checks and balances that our brilliant founders put in place will kick in and help chart a more stable, peaceful and inclusive course for our country in these troubled times.”

Slowly, the Orthodox Jews who were previously loathe to publicly criticize the president are beginning to signal their willingness to talk, to march, to condemn.

I knew these people must exist, and I wanted to find them.

I decided to approach Alexander Rapaport, an ultra-Orthodox father of seven in Borough Park, who runs Masbia, a chain of kosher soup kitchens. Following his attendance at protests of the ban on Muslims, Rapaport received letters of disappointment from prior donors, accusing him of endangering Americans by opposing the immigration ban. However, he continues to openly share his political views and appear at demonstrations. 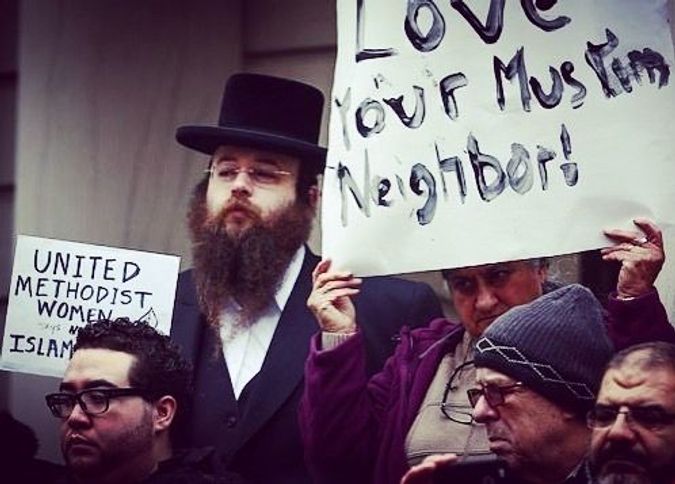 I contacted Rapaport to see if I can help organize a larger Orthodox presence at a rally in New York. He responded by adding me to a private messaging group aptly named “The Resistance” – an ultra-Orthodox, Hasidic, male-only group of participants who are vigorously opposed to the president and his policies, many of whom are active on Twitter.

The admin allowed me to join only temporarily, in order to better understand their work, and messaged me privately asking that I switch my profile photo to something gender-neutral, so that the men would feel more comfortable in my presence. (In the Hasidic world, men and women who are not related have limited to zero contact with each other, whether by phone, computer, or in person.) He also told me to let him know if anyone makes any untoward comments to me. He then posted a message to the group of men reminding them of their purpose in this group which is to discuss recent political events, and to request respectful discourse only.

Once I was in the group, the posts came fast and thick: News articles, memes, relevant events, talk of meetings and protests. Throughout, there is exasperation with their fellow family and friends who are still stubbornly refusing to admit America has a problem and it begins with their president.

I asked them why they think their community is so reticent about adopting new viewpoints about the administration and its policies. One man noted that often politics becomes like a religion for many. Just as the religious community will adhere to their rabbi and his counsel, once they’ve found a candidate to support, they will be fiercely devoted to him.

Yosef Rapaport, another member and frequent civil rights activist, mentioned that men often listen to radio talk shows, instead of reading secular books or watching television, which is frowned upon in these communities. Even men who do not own radios at home listen while driving or working, and they gravitate towards talk show hosts whose views mirror their own. A third Hasidic member, ML, stated that he thinks there is an “urge to be part of something outside the realm of Jewish Orthodoxy. They want to feel as they belong to the broader American society. And the only group they can relate to is the far political right.”

Alex Rapaport told me that as a visible Hasidic man, he experiences numerous anti-Semitic incidents weekly. The recent rise in anti-Semitism doesn’t move him as quickly as it may move others. “Do you know how often I get spit on, or have taxis not stop for me?” He explained that to him, anti-Semitism in America isn’t new. It’s only new to others who are less visible, and now feel attacked.

These ‘resistance members’ are passionate about affecting change – less focused on bemoaning their own community’s complacency, and more interested in real change on the ground. 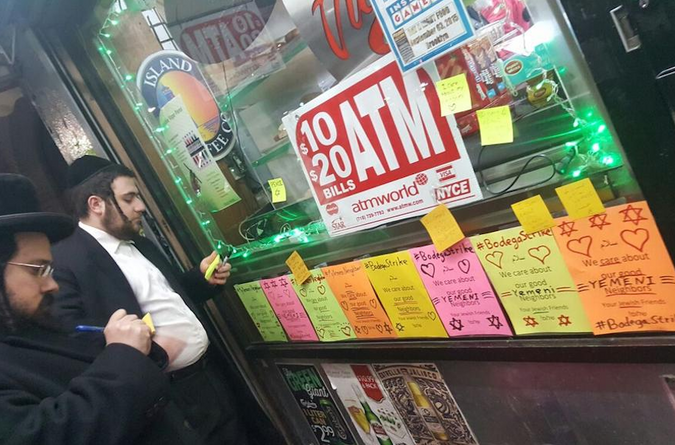 Ultra-Orthodox Jews leaving post-it notes of support at a Brooklyn bodega owned by a Yemeni immigrant. Image by Twitter/David Schwartz

Two group members organized a rally in solidarity with the Yemeni bodega strike in February, and a third, Shaya Bodansky, a Hasid of the Pupa sect in Brooklyn, personally went to the local bodegas to voice his solidarity with his Muslim brothers. 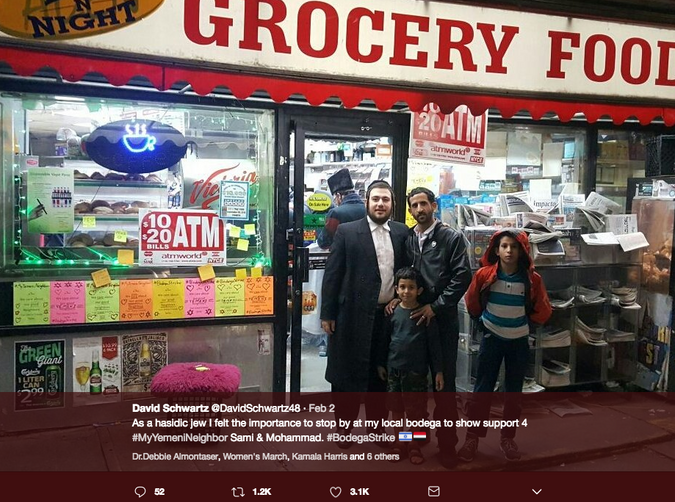 One Hasidic member who asked to remain anonymous dragged his brother to Washington to attend the Women’s March. “We wore our bekishes,” he said, referring to the traditional Hasidic long black coats worn on the Sabbath.

Another man joined a rally at JFK’s airport as well as the protest at New York’s Intrepid when Trump was there. 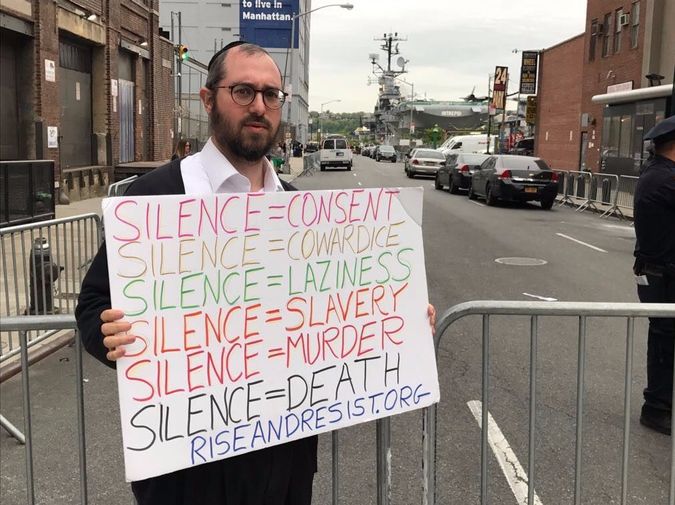 One man informed the group that he’ll be attending his first protest. “Post pictures,” another member texted in response.

At 7am one recent morning, I woke up to 64 new posts in the Resistance chat group, including an urgent voice note, reminding everyone that the deadline for voter registration is soon and to spread the word. A series of “thumbs-up” emojis followed, and efforts to encourage registration began to materialize, between plans of discussing voting on the Yiddish news station “Kol Mevaser” known for its politically diverse opinions, which reaches from Brooklyn to the Hasidic enclave of Monroe, NY, to word-of-mouth personal encouragement of fellow community members in synagogues and study halls.

One man questioned changing his voter registration from Republican to Democrat: “Do you think I should? I’ve never been a Democrat before.”

The group admin demanded: “Do you want to help?”

I waited for his response as I watched the screen: “Yes,” he texted back immediately.

But many members still fear the costs of speaking out in their conservative communities.

Bodansky stated that he voiced his political opinion in Der Voch, a weekly Yiddish newsletter which published his photo, and said he experienced backlash when he came to his local synagogue the next day. He also tried voicing himself on other chat groups which include synagogue and community members, and participants warned him to stop his political “shpiel”. 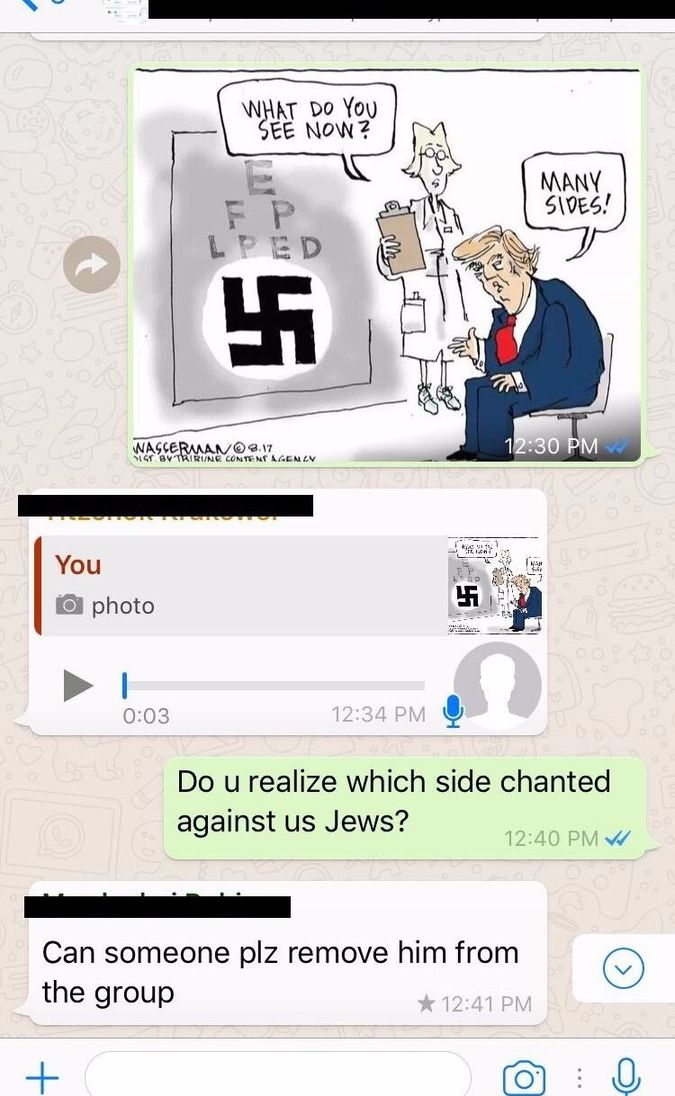 A screenshot of a community Whatsapp group; Shaya Bodansky was asked to leave for criticizing President Trump. Image by WhatsApp

One member of the Facebook group worried about “being mocked at minyan by the pathologically over-confident and snarky smug Trumpers. Which would hit the hot buttons of my existing insecurities about being part of (some of) the religious circles I traffic in.”

Another anonymous group member, a local business owner, said that he fears he has already lost customers due to his outspokenness on politics.

”I cannot afford to be vocal anymore,” he said.

Blima Marcus is a doctoral nursing student at Hunter College, an oncology RN at NYU Perlmutter Cancer Center, and published author at American Journal of Nursing. She lives with her husband and children in Brooklyn, New York.