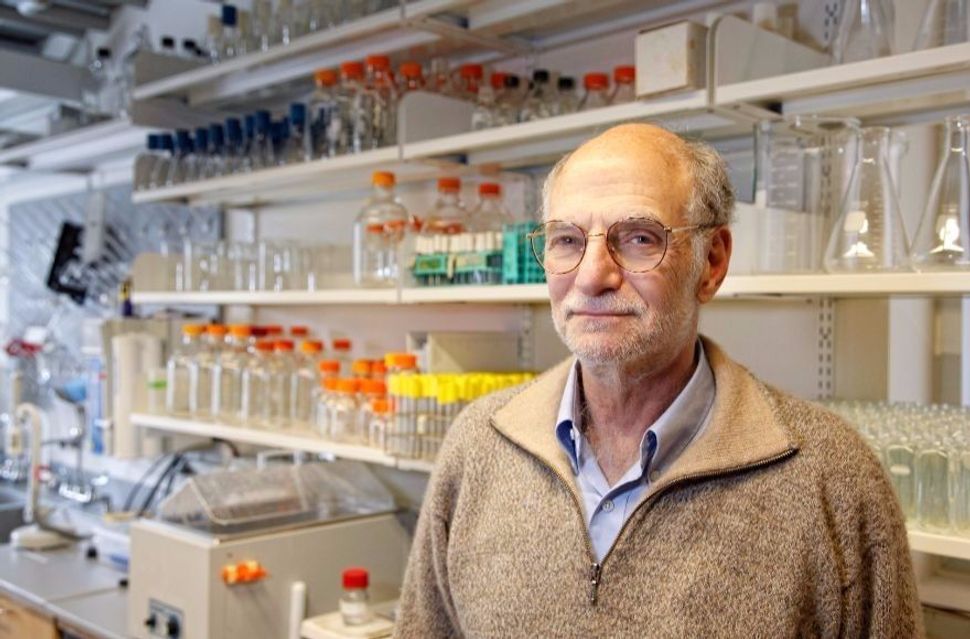 With characteristic envelope-pushing humor, Michael Rosbash, winner of the 2017 Nobel Prize in Physiology or Medicine, couldn’t help dropping a joke into a press conference Monday morning about the life of a scientist.

In the library of Brandeis University, where he has taught for over forty years, Rosbash told a packed crowd of colleagues, university administrators and students — and an untold number of viewers watching the live stream — about a Frenchman, an Englishman and a scientist who were discussing if it were better to have a wife or a mistress.

After the Frenchman and the Englishman disagreed on the relative merits of the two, the scientist weighed in.

Rosbash’s colleagues say the joke was indicative of his temperament: serious about science — and about making people laugh.

“As soon as he started making it we started looking at each other going, ‘Ohhh,’” said Piali Sengupta, a professor of Biology at Brandeis. Sengupta’s lab is next door to Rosbash’s own lab. “I think in a way humor is a sign of intelligence. He just finds a way to touch everything with humor. It’s very entertaining to be his colleague.”

“He is a larger than life character in our department, and always has been,” Sengupta added.

Rosbash’s prize, shared with his longtime colleague and friend Jeffrey Hall and the Rockefeller University scientist Michael Young, is seen as a long time coming: the three discovered genetic mechanisms that govern the circadian rhythm, the day-long cycle that governs metabolism, hormones, brain activity and many other processes in animals. Though the trio’s discoveries came in studying the genes of Drosophila melanogaster — fruit flies — the science of circadian rhythms is now a massive field that includes applications for medicine, plant science and environmental science. The circadian rhythm is most famously known for regulating when humans want to sleep.

As Rosbash repeatedly joked, the Nobel Assembly from Sweden’s Karolinska Institutet “destroyed” his own circadian rhythm: he received their phone call bearing the good news at 5 a.m.

It seems that 2017 Medicine Laureate Michael Rosbash’s daily biological rhythm has been disturbed by the news – stay tuned for interview! pic.twitter.com/AZ4qaByc59

But Rosbash’s friend David Anderson, a professor biology at Caltech, had a better response. After hearing about Rosbash’s win, Anderson texted him that he “must have atoned really well on Yom Kippur.”

Rosbash is the son of Jewish immigrants who fled Nazi Germany in 1938 and settled in Kansas City, Missouri. After Rosbash was born, the three moved to the Boston area, where his father was a cantor at Temple Ohabei Shalom, a prominent Reform congregation in Brookline, Massachusetts.

Rosbash’s father, however, died when he was ten, and Rosbash went to college at Caltech, in California, which he chose because “it was 3,000 miles from my home.”

“I was a difficult kid and a somewhat indifferent student but realized somehow that a new start at a good place and far from home was important,” he wrote in 2013.

Rosbash arrived at Brandeis in 1974, after completing a doctorate at MIT and a research stint in Edinburgh. He quickly became friends with Jeffrey Hall — in an online lecture, Rosbash says the pair bonded over a love tobacco, alcohol and basketball. 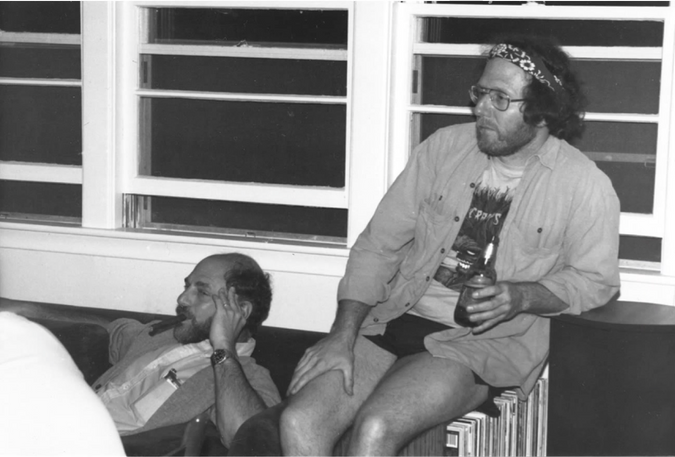 Michael Rosbash, left, and his collaborator Jeffrey Hall, right, in an undated photo from their early years at Brandeis. Image by YouTube

Rosbash also ingratiated himself into the faculty of Brandeis by being outgoing, helpful and always quick with a joke — often at his own expense. And not to mention “brilliant.”

“He’s always looking to push the envelope of what’s known,” said Eve Marder, the Victor and Gwendolyn Beinfield Professor of Neuroscience at Brandeis and a colleague of Rosbash for over forty years. “He’s very forthright, very willing to give people advice, solicited or unsolicited.”

“He has opinions about everything under the sun,” Marder added. “And he’s usually right.”

Rosbash began collaborating with Hall on the genetics of the circadian rhythm in fruit flies in 1982, and quickly began publishing articles about the insects’ biological rhythms. Eventually they discovered that a certain gene in the fruit flies’ DNA controls how different bodily processes act during the night and day. In the Nobel Assembly’s citation of their work, they say that Rosbash and Hall “expos[ed] the mechanism governing the self-sustaining clockwork inside the cell.” (Michael Young’s lab conducted similar research independently at Rockefeller University.)

Rosbash’s research quickly made him a star in the science world. But his colleagues say that his success has never gone to his head. His lab employs over a dozen students a year, and he served as chair of Brandeis’ Department of Biology multiple times, most recently during the last academic year.

“He’s extremely generous, scientifically,” said Sengupta. “He’s one of these people that thinks about everything all the time. So any kind of scientific issues, or problems, he has really good insight.”

Sengupta, who is the current chair of the Department of Biology, said that Rosbash could have gotten away with staying out of the department bureaucracy for all his scientific distinction.

“For someone of his stature, he could easily have said, ‘I’m not gonna do anything,’ and that would have been okay,” she said.

However, Rosbash has done just the opposite.

“He’s really quite honestly interested in seeing his colleagues develop and the community develop. He’s very much invested in making sure the community flourishes, because it helps everybody,” said Eve Marder.

“He’s constantly trying to figure out what can be done to leverage what we have to a greater good,” Marder added.

As a star scientist, Rosbash has more leverage than most: He receives extensive funding from the Howard Hughes Medical Institute, one of the largest sources of private medical funding in the country. Sengupta says that Rosbash’s funding makes its way to many Brandeis labs.

“His lab is more generously funded than many of the other labs,” Sengupta said. “He has always been amazingly generous about sharing everything, his resources, with the entire department.”

Sengupta also said that Rosbash spends a remarkable amount of time mentoring young scientists. She said that his lab has alumni on four continents, and that they routinely get emails from other scientists thanking them for producing excellent researchers. And, unlike some prominent scientists, Sengupta said that, for Rosbash, mentoring undergraduates is “one of his major priorities.”

“Michael makes a point of interacting with all his undergrads, and knowing them and talking with them,” she said.

Rosbash’s commitment to educating young researchers came back to him in the form of a question at his Monday press conference. After his prepared remarks, Rosbash was asked if he had any advice for young researchers who would like to follow in his footsteps.

“It’s the same advice I give my kids: find your star, find something you love, and go for it,” Rosbash said. “You’ve gotta go for what you love, and not look back thirty years, forty years later and say, ‘I never tried.’ You gotta try.”