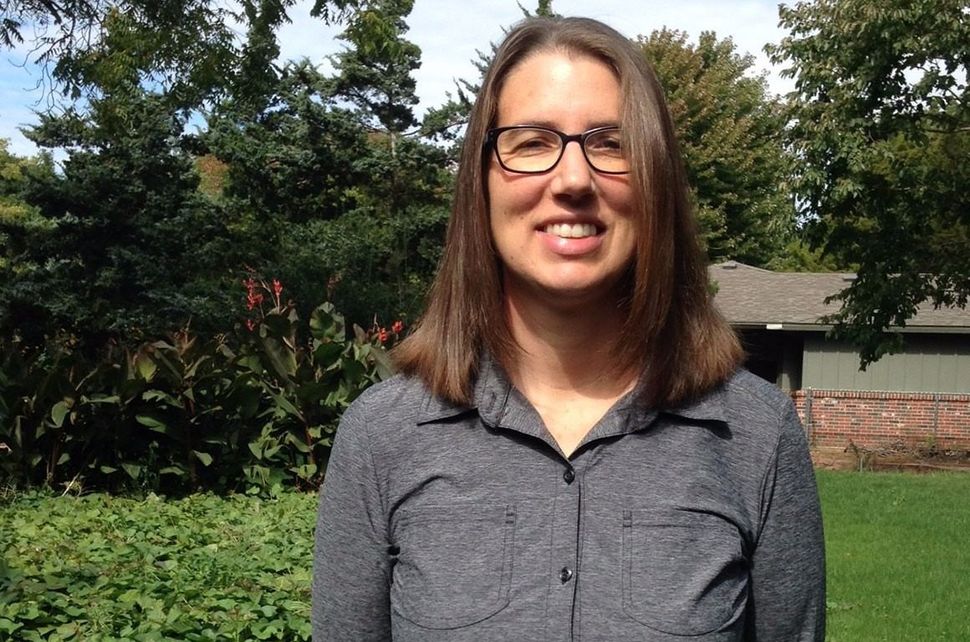 All Esther Koontz wanted to do was train fellow Kansas math teachers to be more effective in the classroom.

Everything was set: She had completed the special training program. She had signed up to help schools in need of assistance. She’d even gotten requests from several schools via the state Department of Education and had indicated she was available to do training for them.

Last July, the consultant running the state program asked her to fill out one more form. It required Koontz to certify to the department that as a contractor she was “not currently engaged in a boycott of Israel.”

But Koontz was engaged in a boycott of Israel. She was boycotting goods and services offered by Israeli companies and by international companies operating in Israel’s exclusively Jewish settlements in the occupied West Bank. A Mennonite Christian, Koontz was doing so in conformance with her church’s endorsement of an Israel boycott and with her own convictions. And as a Christian, she felt unable to sign the affirmation untruthfully.

“I avoid Sabra hummus and, rather than use a SodaStream, I purchase soda water,” she explained in the personal affidavit she submitted in a case now challenging Kansas’ anti-boycott law. “It also means that I avoid using certain websites and apps like Priceline.com, TripAdvisor, and Airbnb.” All these products, she observed, were either from Israeli companies or from companies working in Israel’s West Bank settlements.

Now, Kansas’ law denying Koontz and others who boycott Israel the right to contract with the state will be put to a constitutional test. On Wednesday, the American Civil Liberties Union took her case to federal court and demanded a preliminary injunction enjoining the state from barring Koontz or others in her position from contracting with Kansas state agencies.

“The Supreme Court has held that the state can’t use its economic leverage to coerce people to give up their fundamental First Amendment rights,” said Brian Hauss, the ACLU’s lead attorney on the case. Politically motivated boycotts, he argued, are a long recognized form of expressive political speech upheld by numerous Supreme Court decisions.

Citing the McCarthy era, he said, “This goes back to loyalty oath cases from state governments in which they demanded of employees, you have to swear to us you’re not communist or engaged in subversive activities.” Such oaths were even required to obtain certain tax exemptions, he said, but were ultimately ruled unconstitutional.

Supporters of the Kansas law—and similar laws that have been enacted in other states—maintain that economic boycotts do not fall under the category of protected political speech.

“Let’s be clear,” wrote Eric Mandel in the Jerusalem Post last August. “The right to express one’s point of view, no matter how contentious or odious, is a constitutionally protected right.” But “the attempt to expand the meaning of speech to include commercial transactions,” he wrote, is another matter.

Mandel cited an analysis by the pro-Israel organization Scholars for Peace in the Middle East that found such laws only target “actual commercial boycotts… The distinction between expression, which cannot be regulated, and commercial conduct, which can be, is vital.”

Supporters of the Kansas law say it doesn’t stop anyone from protesting Israel’s policies, or even boycotting Israeli companies. It just bars them from obtaining state contracts—and states have a right to choose their contractors.

But Hauss cited the Supreme Court’s 1982 ruling in the case National Association for the Advancement of Colored People v. Claiborne Hardware Co as a key case rebutting that view. In that case, which dated back to 1966, black residents of Port Gibson, Mississippi declared a boycott against white-owned businesses in the town after white elected officials refused a set of demands for racial integration. The boycott was lifted in 1967 but reimposed in 1968 when racial issues re-emerged.

In 1969, the boycotted Port Gibson merchants sued the NAACP, which sponsored the boycott, and other key individuals backing it to recoup their losses. They won in the local courts and in the Supreme Court of Mississippi. But when the case reached the U.S. Supreme Court, the justices ruled, 8-0, “While States have broad power to regulate economic activities, there is no comparable right to prohibit peaceful political activity such as that found in the boycott in this case.”

In its ruling, the court distinguished boycotts motivated by commercial or economic goals, such as limiting or suppressing the ability of competitors to do business, from nonviolent, politically motivated boycotts focused on public issues—an action it deemed protected.

“This Court has recognized that expression on public issues ‘has always rested on the highest rung of the hierarchy of First Amendment values,’” the court ruled.

Koontz’s case will hinge on whether the court sees the boycott of Israel in similar terms. But it’s not just Kansas’ law that will be on the line. With support from pro-Israel activists, numerous other states have passed similar anti-boycott laws to protect Israel from the movement to boycott, divest from and sanction the Jewish state, a protest known as BDS. Hauss cited Arizona, Michigan and Texas in particular as states whose laws were “very similar” to the Kansas statute. In New York State, Governor Andrew Cuomo issued an executive order last year that also prohibits state contracts with companies or entities supporting BDS.

“A court ruling against Kansas’ law would indicate those laws are also unconstitutional,” said Hauss. Given the stakes, he expects that the losing side—whether it’s his client or the state of Kansas—is likely to appeal. He expects a hearing on his motion for a preliminary injunction by the end of the year.

Koontz herself never imagined things would lead to this when she signed up for the teacher training program. A longtime math teacher in Wichita’s public schools, she had shifted into curriculum training in that system and decided to join Kansas’ program to conduct such training throughout the state. For Koontz, who has three children and is married to a Mennonite pastor, this was to be in addition to her full-time job with the Wichita schools. Her husband, she said, works part-time.

In her affidavit, Koontz said her views about Israel were strongly influenced during a three-year stay in the Middle East in the early 2000s, when she worked for the Mennonite Central Committee in Egypt.

“During my time there,” she wrote, “I visited southern Israel with a college friend, an Arab Israeli from the Bedouin town of Rahat. I was struck by the significant disparity in wealth between Rahat and other cities in southern Israel.”

Her views intensified in 2016, when she attended an eight-night series of church lectures by a member of her congregation who had recently toured Israel and the Israeli-occupied West Bank.

“We watched videos made by non-governmental organizations, children’s rights advocates who reported abuses of Palestinian children as young as our 14-year-old son, and former Israeli soldiers who expressed remorse for participating in the systematic persecution of Palestinians,” she wrote in her affidavit.

The congregant concluded by suggesting those who supported his concerns could participate in the boycott of Israel.

“The talk resonated with me,” she wrote. “I believe that Israel has a right to exist, but I am troubled by the government’s treatment of Palestinians. I believe the Israeli government is treating these individuals as second-class citizens, and feel this is an injustice that I have a duty to combat… The talk was the first time that I understood how I could take concrete steps—in the form of changing what I buy for my personal consumption—to express my views.”