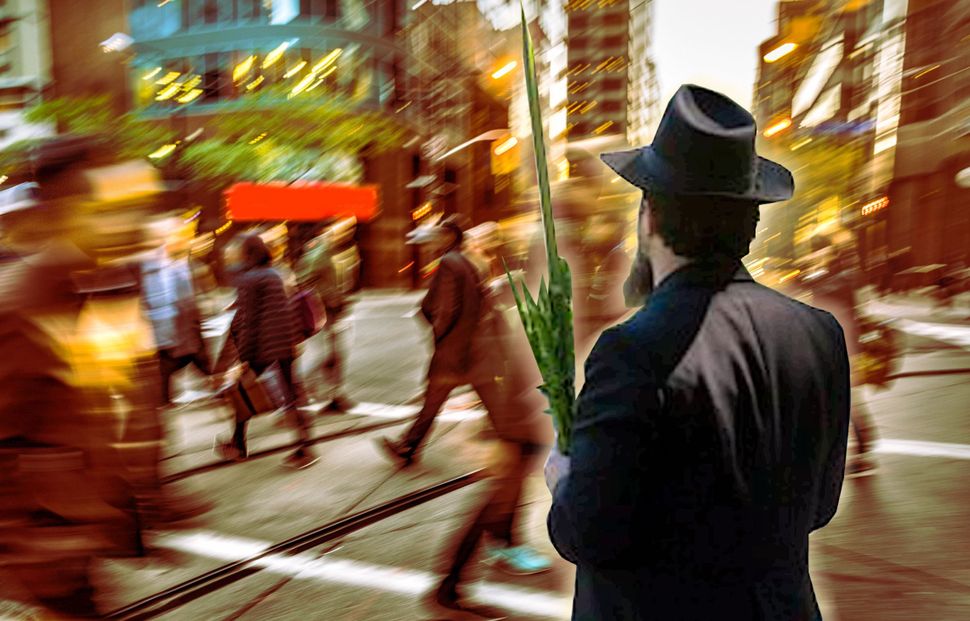 It is a sight familiar to anyone who takes public transit between Brooklyn and Manhattan in the early fall: a seasonal crush of ultra-Orthodox Jews flooding the city in order to bring the world one step closer to Messianic redemption.

On street corners, on campus, on subway platforms and towing a sukkah on the back of a bicycle, Hasidic Jews approach Jewish-looking people in order to help them fulfill Jewish customs.

The practice is known as kiruv, from the Hebrew word meaning “close” or “inward,” though it is often translated as “outreach.” It is most commonly carried out by members of the Chabad-Lubavitch sect, a Hasidic group famous for it’s presence on college campuses that has spread to 1,300 outposts around the world.

Kiruv technically means anything done in order to bring a secular Jew closer to observant Judaism. During the High Holidays, however — from Rosh HaShanah to Simchat Torah — it takes on a special meaning. Chabadniks, as members of the community are often called, pursue massive “mitzvah campaigns” to spread two customs in particular: hearing the sound the shofar, the ritual ram’s horn, and shaking the lulav and etrog, a combination of biblically mandated tree branches and a citron, a kind of lemon.

Jews — and anyone who might appear to be a member of the tribe — are accosted by young men in black suits asking if they have fulfilled these seasonal customs. Even major celebrities are often swept up in the campaigns.

It’s not always a seamless interaction.

“When you come to people on the street with this palm branch and this citrus fruit, people are usually like, ‘Whoa,’” said David, a Chabadnik in his late twenties who prays at a small Chabad center in Crown Heights. David, like the other Hasidic Jews spoken to for this article, did not offer his last name.

David says that kiruv, if somewhat unusual, “comes from the good place of wanting to create a mitzvah.” Still, he said, his own days of being a foot soldier for the “mitzvah campaigns” are over.

“I’m not as outgoing as some of the other guys,” he said. “I always went with somebody who was more on a crusade than myself.”

Indeed, being an extrovert is a necessary prerequisite to practicing kiruv. The men — they are most often men — almost often start with a simple question: “Excuse me, are you Jewish?”

In practice, it rarely goes well.

“Some guys come up to me around my office in the Garment District, because I guess they think I look Jewish,” said one woman, who clarified that she is not Jewish, despite her curly hair. The woman, who didn’t want her name put online, noted that her problem was not so much the question as it was the asking in general.

(This mentality was laid bare countless times for his reporter in attempting to speak to New Yorkers about their kiruv experiences).

The Chabadniks that offer you a mitzvah pit-stop are often young men. On college campuses the ‘Are you Jewish?’ Chabad guys are often college-aged so as to better connect with the student body. But boys as young as 13 can be enlisted.

On a recent afternoon in Crown Heights, small hordes of middle school- and high school-aged boys were walking out of morning services and singing their way up Eastern Parkway. Several carried large yellow flags emblazoned with a crown and the word “MOSHIACH” — messiah — in red. As they walked, they passed out small business cards with a picture of the Chabad rebbe and a message of messianic hope.

Three 14-year-old boys stopped to speak about their love of bringing Jewish custom to secular Jews.

“We do kiruv so that Jews who maybe don’t go around with a kippah all day will do a small mitzvah, and even the smallest mitzvah helps,” said the first boy.

“We want Jews to return to Judaism,” his friend added. “It’s what the rebbe asks of us, so we do kiruv.”

“It’s about repairing the world,” said the third. “Every little mitzvah counts.”

After bidding this reporter a chag samech — happy holidays — and turning to follow their flag-bearing friends, the first boy turned around and yelled, “Even you add to the mitzvah!”

Further down the boulevard, a non-Hasidic couple paused on a bike ride to speak with their friend, a Chabad woman, about the large buildings owned by the sect up and down the street. Between the three of them they expressed a full range of feeling about Chabad’s signature outreach.

“I just think that they’re fantastic,” said Simcha, a woman who attends a nearby Chabad synagogue. “Nobody does what Chabad does.”

“It doesn’t faze me,” said Joey, who hails from Brooklyn’s Syrian Orthodox community. “They’re good-hearted. They want to do good — what can you do?”

His wife, Barbara, was less impressed.

“I get a little turned off,” she said. “I don’t want people telling me what to do.”

Joey noted that though the practice is not for him, he has heard stories of people “who get very emotional” when they fulfill the customs promoted by Chabadniks.

“They want to get you back in touch with your roots,” he said.

Plus, he added, they’re not as insular as other Hasidic sects.

“They’re much more open and much more tolerant than maybe some other groups,” he said, gesturing around at Brooklyn.

Chabad’s openness was essentially mandated by the sect’s late leader, Rabbi Menachem Mendel Schneerson. He encouraged his followers to go out and encourage less religious Jews to take on the mantle of Jewish observance. Many Chabadniks believe that the fulfilling of mitzvot — commandments — will hasten the coming of the messiah. (Some, however, believe that Schneerson was the messiah.)

Some Chabad groups even track the number of mitzvot incurred during the High Holiday season, as did the Chabad houses on British campuses last year. 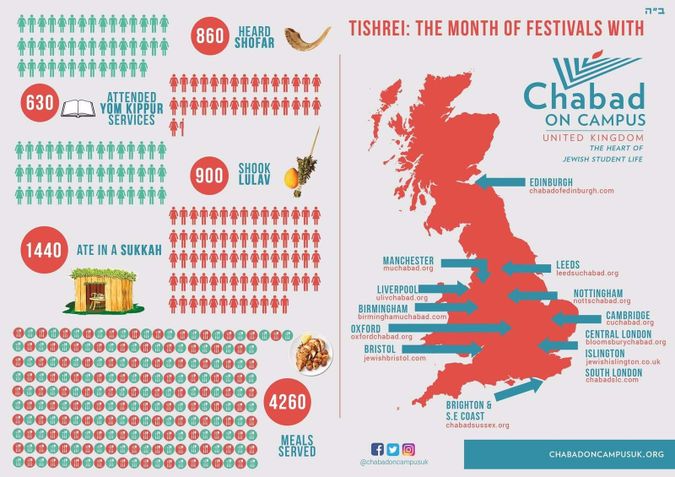 A chart from Chabad UK showing the number of “mitzvahs” accomplished on university campuses. Image by CHABAD.ORG

Still, the campaign does not always go over well with passers-by.

“It can raise antagonism,” said Menachem, a Chabad member in Brooklyn. He said that some Jews don’t want to be made aware of Jews who are more religious than they are.

“You are reminding people of a culture within a culture,” he said. “For some people trying to suppress that, you can have a bad reaction.”

Some Jews have little patience for the advances of the mitzvah campaigners. People spoken to for this article variously called the practice “annoying” and “belittling.”

It can also create hostility or intolerance toward Hasids — just the opposite of its goal.

“My daughter and I got stopped five times walking down the street,” said one woman. “And my daughter said, ‘It’s like playing Dodge the Jew.’”

Correction, October 17, 1:29 p.m.: This story previously asserted that women are not allowed to take part in kiruv. Women are allowed to practice kiruv, but generally only with and towards other women.