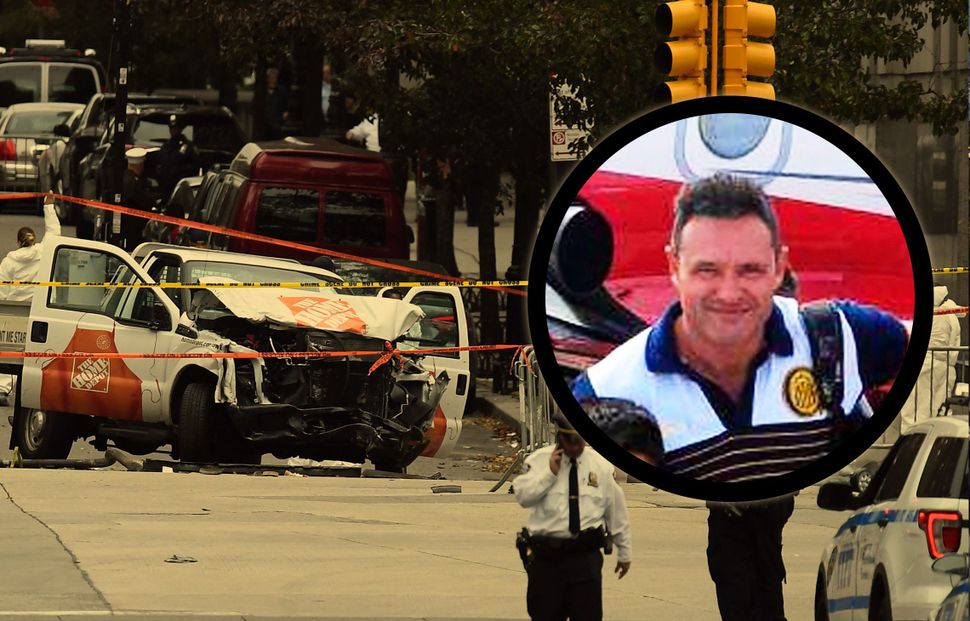 The 49-year-old Jewish factory owner was headed to meet up with a crew of his high school buddies for a celebratory reunion trip.

“We are devastated, dismayed,” one of Erlij’s relatives told the Argentine newspaper La Capital.

Erlij was a prominent businessman in the central Argentine city of Rosario. He leaves behind three young sons.

The high school reunion trip, according to the Argentine newspaper Clarín, was largely Erlij’s doing. Erlij arranged the logistics and helped pay the way for some of his friends. The trip was meant to celebrate the 30th anniversary of their graduation from the Instituto Politécnico Superior General San Martín, a high school in Rosario. A classmate, Martin Marró, lived in New York.

On Saturday, Erlij saw off his friends at the airport in Rosario. The group of eight men posed for a photo, all wearing white T-shirts with the word “LIBRE,” Spanish for “Free.” The design, according to Clarín, was Erlij’s idea.

Erlij flew north the following day. The group traveled to Boston and then to Manhattan, where they rented bikes to ride around the city. Four of the men were killed outside Stuyvesant High School on Manhattan’s West Side; one died later in the ambulance. Four more survived. One of the survivors, Ariel Benvenuto, called his wife soon after the attack.

“He told me he was okay, that I shouldn’t worry, but that there had been an attack. That he, Iván and Juan Pabo were okay, but that the situation was serious,” said Benvenuto’s wife, Cecilia Piedrabuena,according to Clarín.. “They were 10 friends from high school; they always got together. It’s terrible what happened.”

In addition to his business activities, Erlij was also an active sportsman. He played soccer and volleyball with the Rosario Rowing Club, a local group, where his nickname was “Momia,” according to Clarín. He lived in a gated community outside Rosario.

“There’s very much sadness,” an employee of Ivanar told Clarin. “Ariel was a very nice person, very loved by everyone. We can’t believe it.”

Mendy Tawil, a Chabad rabbi in Rosario, said that Erlij was well known in the city’s Jewish community but had no ties to its Jewish institutions. Tawil said that Erlij’s father was Jewish and his mother was not.

AMIA, the Jewish community center in Buenos Aires, condemned the attack in a statement.