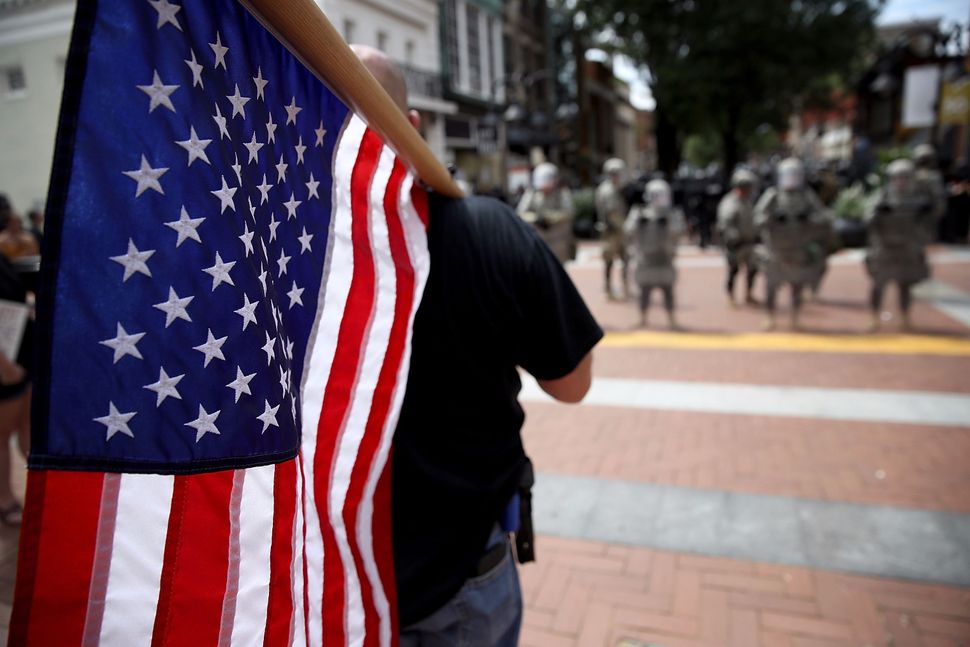 Over the past two years, Nazis and other white supremacists have been going through a series of dramatic makeovers. They’ve cast off the cloak of the Ku Klux Klan and emerged in the guise of the frat boy next door, in polo shirts and khakis. They dubbed themselves the “alt-right” and tried to join the cool kids of the internet, shrouding their hatred of blacks, Jews or any non-white group in layers of millennial-style irony.

Now, neo-Nazis are tweaking their image yet again, this time in a way that seems self-defeating. They’re shunning the swastika, trying to swap it out for the American flag — and hoping you won’t notice. Their theory is that the protests sweeping the NFL, in which players take a knee during the playing of the “The Star-Spangled Banner,” are a moment they should seize. If they can associate themselves strongly with the flag, they hope, they can fan the flames of hatred against black people and attract more followers at the same time.

“The moment has come,” reads a post by Andrew Anglin, publisher of the neo-Nazi website The Daily Stormer, “for white nationalists to take up the American flag, and pivot from the ‘alt-right’ to American Nationalism.”

The sideline protests against police brutality, some in the “alt-right” believe, offer the perfect chance to preach the gospel of white supremacy to alienated white football fans. In other words, they’re hatching a bit of a bait and switch: Ditch the fascist imagery; adopt the Stars and Bars.

“They’re trying to exploit this moment of national tension,” said Chip Berlet, an independent researcher of extremism. “White nationalists are wrapping themselves in the American flag.” 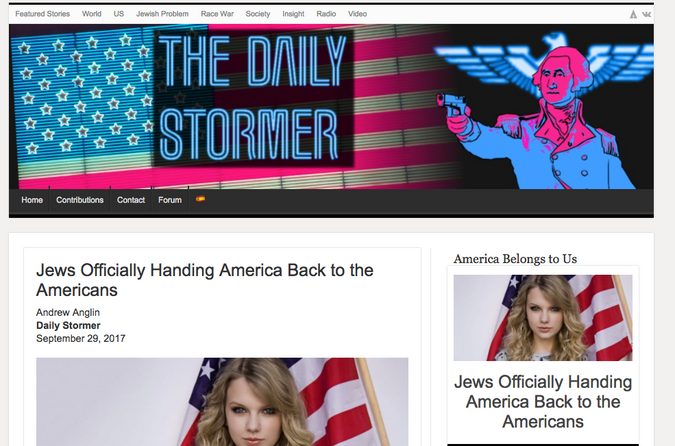 The banner image of the Daily Stormer now features the American flag.

The latest rebranding effort from Anglin comes in the wake of this past summer’s deadly Unite the Right rally in Charlottesville, Virginia, where some white nationalists marched openly in Nazi garb. The rally devolved into violence, and the entire event has caused some backlash for the movement.

Nazi websites were shuttered in the weeks after Charlottesville. The Daily Stormer is still jumping from host to host. Protesters were exposed online (“doxxed,” in internet parlance) and fired from their jobs, and speakers like Richard Spencer are still struggling to find venues to promote their message.

Most within the “alt-right” promulgate boilerplate white nationalism — teaching the idea that the white race is imperiled by a “rising tide” of brown and black people — and that Jews profit from or are working toward the downfall of whites.

But Charlottesville and its aftermath caused some fracturing with the “alt-right,” said Marilyn Mayo, an Anti-Defamation League researcher. One camp is arguing that the movement needs to move toward the aesthetics of the white “mainstream” — rallying around the flag — while another is not ready to part with the more hardcore symbolism of white nationalism, like swastikas or Confederate flags.

Anglin, despite the intensity of his identification with historical Nazis, hailed the NFL protests as a “historic event” with great potential for white supremacists to recast themselves as simple patriots standing up for the national anthem and the flag — and those kneeling as un-American.

“I know for a fact that the overwhelming majority of young white men – the ones we are appealing to most directly – will be more moved to fight for America than for some fascist logo someone made in Photoshop,” wrote Anglin, the internet’s most famous neo-Nazi.

Anglin sees the ongoing NFL protests as a chance to move beyond the Charlottesville controversy and preach the gospel of white supremacy to white football fans. He is particularly anti-Semitic, even for the “alt-right,” and titled his NFL post “Jews Officially Handing America Back to the Americans.” The argument: The support of some Jewish people for the player protests is “evidence” that both Jews and blacks fundamentally hate America.

“With this NFL kneeling scandal – the direct, unprecedented attack on America itself by the sportsball negroes,” he wrote, “Jews have been forced to come out and finally tell the truth: that they and their hordes never were America.”

Spencer also sees the protests as potentially benefiting him and his followers. “The NFL Scandal Only Escalates the Situation in Our Favor,” a headline on Spencer’s website, altright.com, trumpeted. “The longer the controversy continues,” the post went on, “is good.” If NFL fans become upset about political debates interrupting their Sunday game, this is an opportunity for them to be radicalized, the post continued.

When President Trump weighed in on the controversy to question patriotism of the protesting players, his comments further enflamed the culture war. Anglin and others celebrated.

The NFL has decided that it will not force players to stand for the playing of our National Anthem. Total disrespect for our great country!

But while Anglin and his camp are urging the “alt-right” to shift away from open white supremacy to a seemingly more benign look of what they’re calling “American Nationalism,” not all white nationalists agree with the approach.

“Is cornball Americana really the best way to go?” the Southern nationalist Brad Griffin wrote on his website, lashing back against the new position taken by Anglin’s camp. “Who are we trying to appeal to anyway?”

Griffin, who goes by the internet name Hunter Wallace and decorates his website with the Confederate flag, dubbed his unapologetically white supremacist camp the “Hard Right.” He helped organize a White Lives Matter rally last month that was criticized by some on the “alt-right” for being too hardcore in appearance. Swastikas were flying openly on flags, again — and the event received negative press.

No matter, Griffin wrote. People like Anglin are too focused on “optics” and shouldn’t bother trying to appeal to the “normies,” internet slang for potential mainstream converts. By holding unapologetic white supremacist rallies, he argued, they would attract new members.

The question of openly championing white supremacist symbols may seem like a significant difference — and it might cause an online war of words — but ultimately both camps are trying to do the same thing: attract more people to white nationalism. They’re just thinking about the different ways to go about it.

“We can be the carriers of the torch of the American nation and ride in, draped in the flag, as saviors of the people,” Anglin wrote. “Saving from the alien Jew and his evil hordes of brown invaders.”