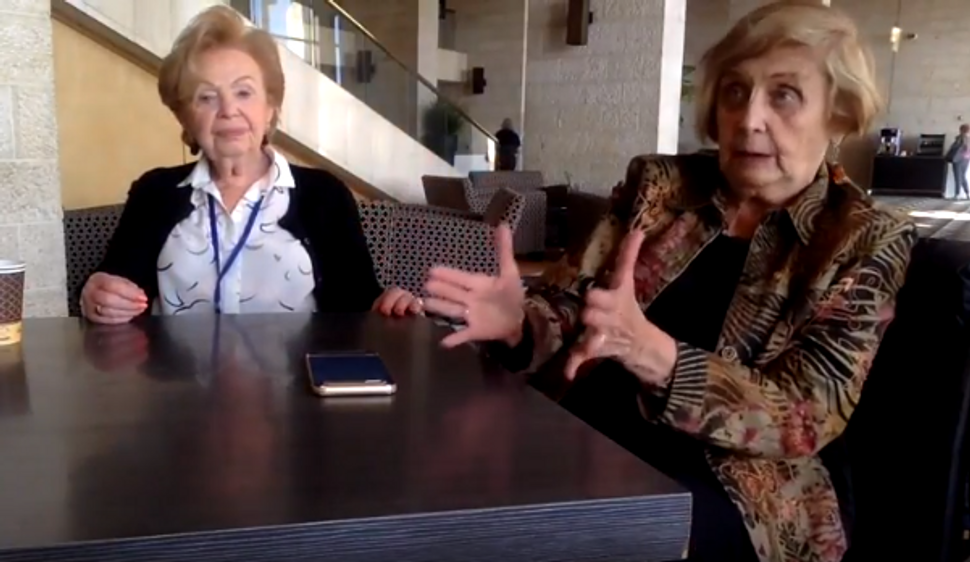 Ruth Meltzer (left) and Tova Friedman at the Jerusalem gathering of Jewish child survivors of the Holocaust. Image by Naftali Ejdelman

Two weeks ago I happened to witness a small miracle.

As a Jerusalem resident this year, I was intrigued to learn that there was an international conference of Jews who had survived the Holocaust as young children taking place not far from my home. Since my own late grandfather, Dr. Mordkhe Schaechter, had been a child when his family was forced into the Czernowitz ghetto, I decided to check it out.

The annual gathering, which took place from November 5-8, was sponsored by the World Federation of Jewish Child Survivors of the Holocaust and Descendants.

Over lunch in the Dan Hotel dining room, I began chatting with the woman sitting next to me. Tova Friedman, who had flown in from New York, told me that she was one of the youngest children to have survived Auschwitz, together with her mother. “When the Russians liberated Auschwitz I was five years old,” she said.

After the liberation they returned to their hometown, Tomaszów-Mazowiecki in order to find out if any other relatives were still alive. Miraculously, her father was. The rest of their family was not so lucky.

“My mother had 150 relatives, including 9 siblings and all their children. Not one of them survived,” Friedman said.

In 1950, Friedman and her parents immigrated to New York. Over the years she managed to find three of the four other girls from Tomaszów-Mazowiecki and since then they had all stayed in touch. Frieda Tenenbaum settled in Boston; Rachel (Rutka) Hyams – in Canada, and Rena Margulies Chernoff – in Brooklyn.

A book about these last girls of Tomaszów-Mazowiecki was published in 1998.

“Unfortunately, two of the four women are no longer with us,” Friedman remarked. In 2008, Hyams took her own life and last summer, Chernoff passed away. “So out of the five girls of Tomaszów, only Frieda and I are left,” she added.

“For years I’ve been wondering about the fifth girl,” she added. “I’m sure she must be somewhere.”

After a while, Friedman excused herself and went over to chat with other participants. I finished my lunch and began talking to several Israelis who were children during the Holocaust. As I was about to leave the dining room, I suddenly noticed Tova Friedman speaking excitedly with another woman, clutching her hand. A cluster of people had gathered around them.

“Come here!” she cried out to me, waving me over. “It’s her! The fifth child of Tomaszów!”

I ran over and glanced at the other woman’s nametag. Ruth Meltzer, from Munich, Germany.

“Me and Frieda, the one who lives in Boston, we thought we were the only ones left from Tomaszów-Mazowiecki!” she exclaimed.

“And now she found me – oy, what a bargain!” Meltzer joked, giggling. Although Meltzer said she hadn’t used Yiddish in years, she was now chatting effortlessly in her mother tongue.

The two women sat for an hour sharing memories about Tomaszów-Mazowiecki, and described the tense days right after the war, when everyone was constantly checking the names of survivors posted regularly on the bulletin board, hoping to find relatives and friends.

“It’s so wonderful to know that three of the five children are still with us!!” Friedman declared gleefully. “And not just living, but living very well indeed!”