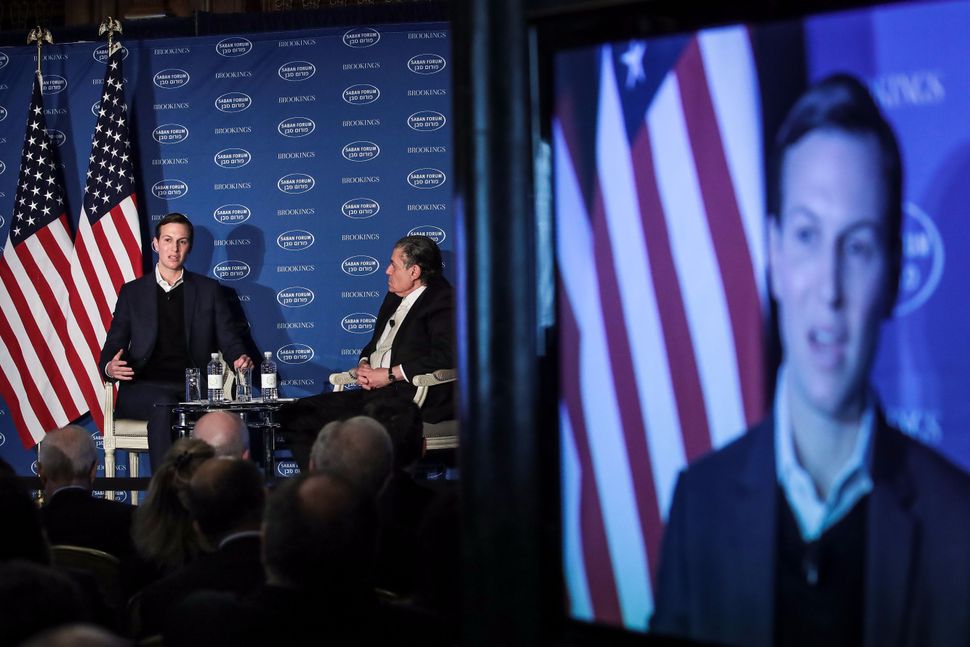 Jared Kushner’s ongoing troubles grew over this past weekend: Former National Security Adviser Michael Flynn’s plea deal turned Kushner into the likely next target of the Russia probe, and news broke that Kushner had orchestrated the Trump transition team’s efforts to scuttle a United Nations Security Council vote that the Obama administration refused to block.

But none of that was evident during Kushner’s rare public appearance Sunday afternoon, at the Brookings Institution’s Saban Forum, which brings together Israeli and American policymakers to discuss the state of the two countries’ relationship.

Kushner was met with softball questions from his gracious host, media billionaire and Clinton megadonor Haim Saban, who did not give the audience an opportunity to pose questions to the First Son-in-Law. The only mention of the Russia investigation came in the form of praise Saban offered Kushner for sending Flynn on a mission that the former lieutenant general later lied about to the FBI, leading to his indictment.

“You’ve been in the news because of an issue I personally want to thank you for,” Saban said when opened his on-stage discussion with Kushner, noting Kushner’s work to convince U.N. Security Council members, including Russia, to postpone a vote condemning Israel for its settlement policy. “As far as I know, there’s nothing illegal there, but I think this crowd and myself want to thank you for making that effort, so thank you very much.” A few members of the audience joined Saban in applauding.

Kushner was not asked to respond, likely to his relief and to that of his lawyer, Abbe Lowell, who sat in the audience.

Kushner, who heads the Trump administration’s effort to negotiate an Israeli-Palestinian peace deal, provided very few specifics regarding the agreement he is trying to broker.

Kushner would not provide details of the upcoming peace plan, nor would he say whether Trump will soon declare America’s recognition of Jerusalem as the capital of Israel, as has been widely reported.

His broad outlines of the Trump administration’s Middle East policy portrayed a White House determined to reach a final-status agreement between Israelis and Palestinians, not a set of short-term arrangements aimed at improving life on the ground. “A lot of the issues that come up on a daily basis are because of not having a final-status agreement,” Kushner said. “We try to stay focused on solving the bigger issues.”

Kushner’s Middle East team, which he jokingly characterized as being made up of “three Orthodox Jews and a Coptic Egyptian,” is expected to present a Middle East peace plan in the coming months. Its members — Kushner and former Trump employees Jason Greenblatt and David Friedman, who are all Jewish, and Dina Powell, who was born in Cairo to a Coptic family — have gained, according to Kushner, the trust of all sides in the Middle East. He said that was thanks to the trust both Israelis and Palestinians have in President Trump. “It’s not a conventional team, but it’s a perfectly qualified team,” he said.

He also made clear the administration views resolving the Israeli-Palestinian conflict as crucial to achieving stability in the Middle East, echoing the decades-old “linkage” theory that has been rejected by Israel.

Will Trump confirm that the U.S. wants to see a final status agreement explicitly based on a two-state solution? Kushner did not say. But then again, he wasn’t asked.

Kushner’s unusual public outing appeared like an awkward courting game between the 36-year-old businessman-turned-political adviser and the 73-year-old Israeli-American Hollywood mogul Saban, who was one of Hillary Rodham Clinton’s top donors during the 2016 campaign.

As Kushner listened, visibly uncomfortable in front of the crowd, Saban went on to tell about their friendship, which found its roots in a letter Kushner sent Saban back in 2010, complimenting him after reading a New Yorker profile of Saban. Saban, as he tells the story, didn’t even read Kushner’s letter until last year, when, at the height of the election campaign, an aide showed it to him. Ever since, at least in Saban’s account, their friendship has blossomed.

Kushner and Saban resorted to a lot of friendly banter and yiddishkeit. Yes, Ivanka and the kids are getting used to life in Washington, Kushner assured Saban, stating that the “schools are great.” Kushner and Ivanka Trump’s children attend Jewish schools in Washington.

And no, Kushner made clear, he is not distracted by the negative press he’s been getting — he’s just trying to get his work done before the window of opportunity closes. “We feel like it’s sand going through an hourglass,” Kushner said.