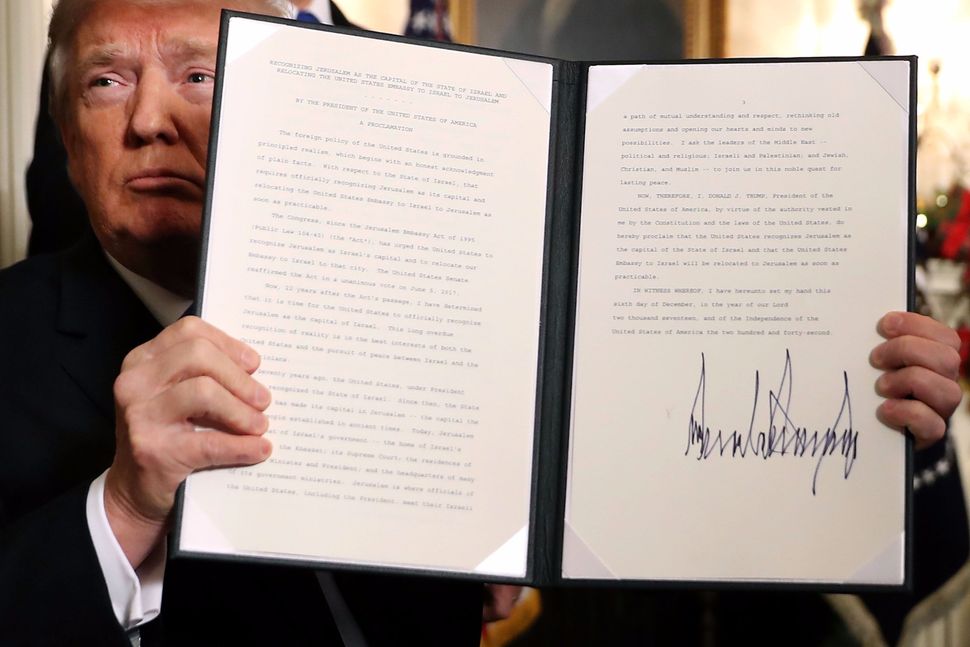 Republican Ileana Ros-Lehtinen and Democrat Ted Deutch have usually very little in common. But President Trump’s announcement of recognition in Jerusalem as Israel’s capital, brought about a rare moment of bipartisanship. Ros-Lehtinen and Deutch, both Floridians and known as strong supporters of Israel in congress, issued a joint statement welcoming Trump’s move.

“Today’s decision does not preclude our shared goal of two states for two peoples to be negotiated between the parties themselves,” the Republican and Democratic lawmaker said in their joint statement, adopting the Trump administration’s explanation of the move.

Deutch and Ros-Lehtinen’s decision to join forces across the aisle in praising the decision may stand out as unusual, but it highlights the dilemma pro-Israel Jewish Democrats such as Deutch have encountered: Squaring their dislike of Trump and his policies, with their support for the idea of accepting Jerusalem as the capital of Israel.

For most, the middle ground meant expressing support for the idea behind Trump’s move, without mentioning the president or his declaration.

Such was the case with another Florida Democrat, Debbie Wasserman Schultz, in her statement issued Wednesday.

“I remain as committed as ever to safeguarding Israel’s future as a Jewish and democratic state, at peace with its neighbors, with Jerusalem as its undisputed capital,” Wasserman Schultz stated, while noting that full recognition of Jerusalem by the world as Israel’s capital “can be achieved through final status negotiations.”

Even those willing to criticize Trump directly for the move had to made sure they qualify their criticism with a message of support for Jerusalem as Israel’s capital. “While President Trump’s announcement earlier today rightly acknowledged the unique attachment of the Jewish people to Jerusalem,” said Jerrold Nadler of New York, “the timing and circumstances surrounding this decision are deeply worrying.” He then accused the administration of “carelessly risked inflaming tensions in the region, as well as placing U.S. diplomatic and military personnel in harm’s way.”

Jewish Democrats on the more liberal end of the political spectrum were the only ones to publicly criticize Trump’s Jerusalem declaration.

“President Trump’s announcement today ignores reality and the consequences of an action that breaks with long-time U.S. policy held by both Republican and Democratic Administrations,” tweeted Jan Schakowsky from Illinois, who is endorsed by J Street, the left-leaning pro-Israel lobby that has taken a critical stance of Trump’s decision to declare the U.S. recognition of Jerusalem as Israel’s capital. _ Contact Nathan Guttman at [email protected] or on Twitter @nathanguttman_