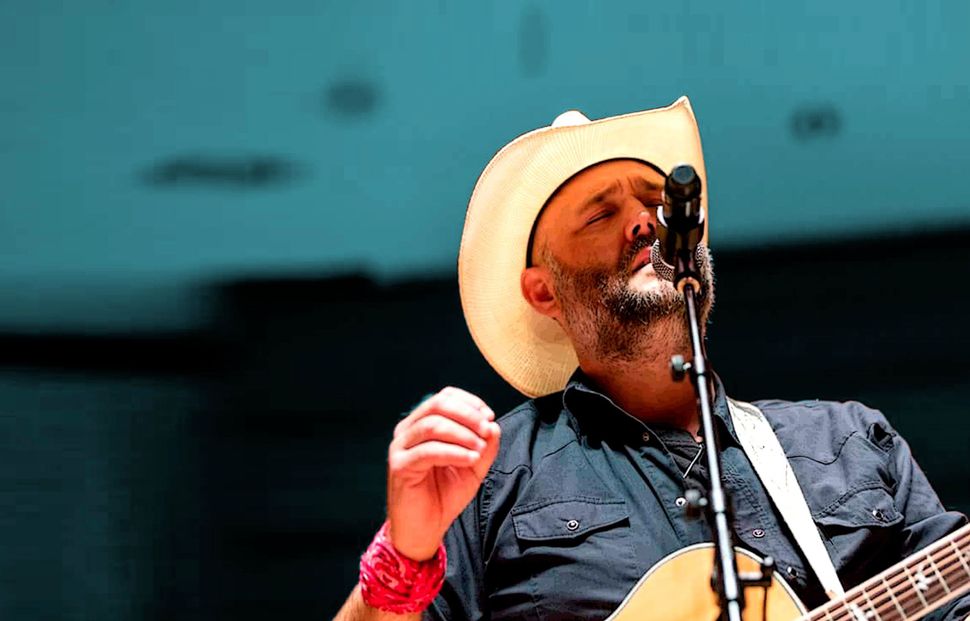 Image by Courtesy of Joe Buchanan

At the largest gathering of Reform Jews in the country earlier this month, Joe Buchanan stuck out in the crowd. Thousands of Jews had gathered in Boston for four days of worship and learning.

But Buchanan was the only Jewish cowboy.

In a black felted hat and a patterned handkerchief tied around his wrist, Buchanan, 41, wove his way through the sprawling crowd of educators and vendors at the packed convention center hosting the Union for Reform Judaism’s biennial convention. Slung over his shoulder was a guitar.

The URJ made a pamphlet featuring the many musicians in the crowd and highlighted Buchanan’s distinct niche as a poster boy for Jewish country. “This is feel-good, toe-tapping, Americana,” a blurb trumpeted, “with a Jewish Soul.”

Buchanan is a Texan convert to Judaism who has been rising within the Jewish music circuit. While much contemporary devotional Jewish music draws from American roots music — think Debbie Friedman or even Sholomo Carlebach, who joined Hasidic melodies with folk influence of the 1960s counterculture — Buchanan brings a country twang to Hebrew prayer. A longtime spiritual seeker who once jumped from church to church in Houston, Buchanan discovered Judaism six years ago and describes the experience as a homecoming. His debut album, “Unbroken,” which came out last year, features songs in Hebrew and English and Buchanan describes it as a personal testament to belief.

The album is a “story about finding faith and standing tall,” Buchanan said, “and choosing to be chosen.”

Buchanan was born and raised in Houston and, like most people he knew, went to church. But he described himself as a perennial troublemaker who was always asking too many questions about religion. “I believed in God,” he said. “But I struggled with the things that other people told me about God and about the afterlife. Like, why would a loving God send us to Hell?”

In the 1990s, Buchanan worked at a gaming and comic book store downtown. He would hang out with buddies on Saturday night and on Sunday go to church — often a different one each weekend. “I was trying a lot of things out,” he said. 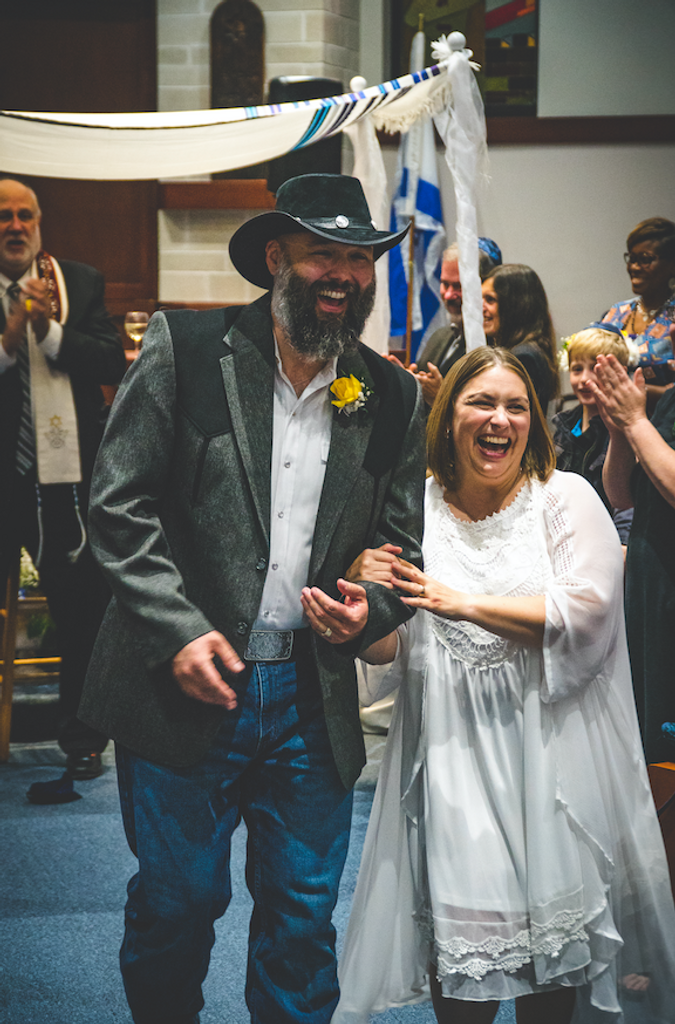 Joe and April Buchanan wed in a Jewish ceremony at Shaar Hashalom. Image by Courtesy of Joe Buchanan

On slow days at the comic shop, he’d sit behind the counter and pluck at a guitar, which he had taught himself to play mostly on his own.

One afternoon, a woman named April Mitchell walked in the store and Buchanan felt the wind knocked out of him. “I lost my mind,” he said. “I just wanted to impress her.” They would soon start dating, eventully marry — and years later convert to Judaism together.

April, now a 44-year-old IT consultant, was raised in Texas to a Southern Baptist father and non-observant Jewish mother. She would attend church as a child, she recalled, but often felt aloof. “I would sit in the pews,” she said, “but wouldn’t pray.”

Her Jewish mother, originally from New York, taught her some basics about contemporary Jewish history — and gave her a Star of David necklace — but Judaism always felt distant. April joined a Methodist youth group as a teenager, but it was more of a social thing, she said.

When April met Joe, she was working in development for Public Broadcasting Service and felt disconnected from any formal religion. “I was drifting further and further away from any religion and drifted away from God,” she said.

Joe’s spiritual seeking may have rubbed off on her. As they got to know each other, she’d attend church with him on his wide-ranging trips around Houston. They married in 1999, in a civil ceremony.

Their son, Nathan, was born the next year. Joe jumped around jobs — selling cars, working for a construction company — before settling into a human resources gig at an industrial cleaning company. April shifted to IT work. Joe’s spiritual seeking continued — frequently visiting a Methodist church near their home — but the family never settled on one congregation or practice.

Then a 2011 visit to the Holocaust museum in Washington, D.C. changed everything for them. The Buchanans spent hours at the museum, moving through exhibits about the rise of Nazism in Germany and the horrors of the Jewish genocide. “It hit me. Something was missing. There was something more,” April said. “A lightbulb went off.”

April stood outside the museum and told Joe that she wanted to learn more about Judaism. “You’ve been trying to figure out God for a long time,” she said. “I think I want to get in touch with my people’s faith.” Joe was surprised — he had nearly forgotten that she had Jewish roots — but said he’d be open to trying Judaism out, too.

They were largely ignorant about the religion then. All Joe knew, he jokes, was that Jews didn’t eat pork. April sheepishly admits now that she thought Judaism was just “Christianity without Jesus.”

Once back home in Houston, April and Joe went to their computer and searched broad questions like, “What do Jews believe?” The results were overwhelming. “There were so many curtains to pull back,” Joe said.

They liked self-directed learning — and began delving into Jewish stories and picking up religious objects for their home, like a mezzuzah — but eventually decided they needed some sort of guide and a communtiy to actually attend.

Down the road from their home, they found a synagogue of around 130 families called Shaar Hashalom.

They didn’t know it, but the congregation, one of three serving the Jewish population in the southwest corner of the city, was headed by a rabbi who is exceptionally open to the spiritually curious.

Rabbi Stuart Federow, 64, has long had an interest in Jewish outreach. Federow is a Reform-trained rabbi with an Orthodox background who runs a Conservative synagogue — and sees himself as not fitting neatly into one denomination. For over a decade he’s hosted a live call-in talk show about comparative religion and is the author of a book titled “Judaism and Christianity: A Contrast.” A few years ago, his synagogue hosted a day-long event on the phenomenon of Christian families keeping Jewish practices in secret. In this area, interest in the phenomenon of Crypto-Judaism is popular, Federow said, and he welcomes converts who want to explore their heritage or are just seeking.

The Buchanans felt at home.

Parents and son began learning about Judaism with the rabbi — and converted together in 2013.

There have been some bumpy moments for the new Jewish family. Buchanan recalled being approached by an ultra-Orthodox rabbi who questioned the validity of his conversion. Each branch of Judaism approaches conversion differently. Reform Judaism is perhaps the most open, hosting introductory courses to Judaism, like the one that the Buchanans enrolled in. Orthodox conversion is widely seen as the most strict and difficult. Conversion has often been at the heart of denominational disputes. The ultra-Orthodox rabbinate of Israel, for example, will not recognize non-Orthodox conversions within Israel. All of this was news to Buchanan — and a little dispiriting. “Sometimes, it can feel like I’m outside looking in, honestly,” Buchanan said. “I’m still trying to figure out where I fit.”

As he began attending Shaar Hashalom, Joe would bring his guitar around the synagogue and play. Federow was immediately struck by Joe’s charisma and talent — and urged his new congregant to attend a group class for Jewish songwriters, called Song Leader Bootcamp.

The songwriting camp was his first exposure to the Jewish music world. He met cantors, rabbis and lay leaders from Conservative and Reform circles who were using music and song in prayer settings. He’d never seen anything like it before.

When Joe came back to Shaar Hashalom he started trying out his own music-infused prayer services. They were so popular that he began visiting other Texas synagogues to play. He quickly set up a promotional website and the business mushroomed. Now, he travels nearly every weekend to a different congregation, where he’ll play and also lead workshops where he shares his story and invites questions. “People want to know, why are people converting? What are the seeking? How can we welcome them?”

Joe’s rabbi said he’s proud of his congregant — even though he isn’t at his Houston homebase as often anymore. “Elvis didn’t stay in Tupelo, either,” Federow said.

Buchanan connected with Saul Kaye, a music producer known as the “king of Jewish blues” and recorded his debut, a 14-song release featuring old school organ and lap steel guitar. Buchanan’s rabbi even wrote the lyrics to a song, inspired by a passage from the Amidah. Buchanan left his job, working in human resources for an industrial cleaning company, to focus on the music.

“People are often asking, ‘Where is the new Jewish music?’ Federow said. “There is a sea of it out there. And Joe is a part of that.”

On an evening last month at the massive URJ conference, Buchanan stood at the back of the auditorium by himself. He had been performing earlier and introducing other musical acts. Then, he was hyping up the crowd, lifting his arms to rouse the audience. Now, he was crouched in the back, taking a moment for himself. He would be playing another large conference the next day and admitted he was feeling exhausted. “I still sometimes feel a great distance,” he said. “I needed a moment to pray.”