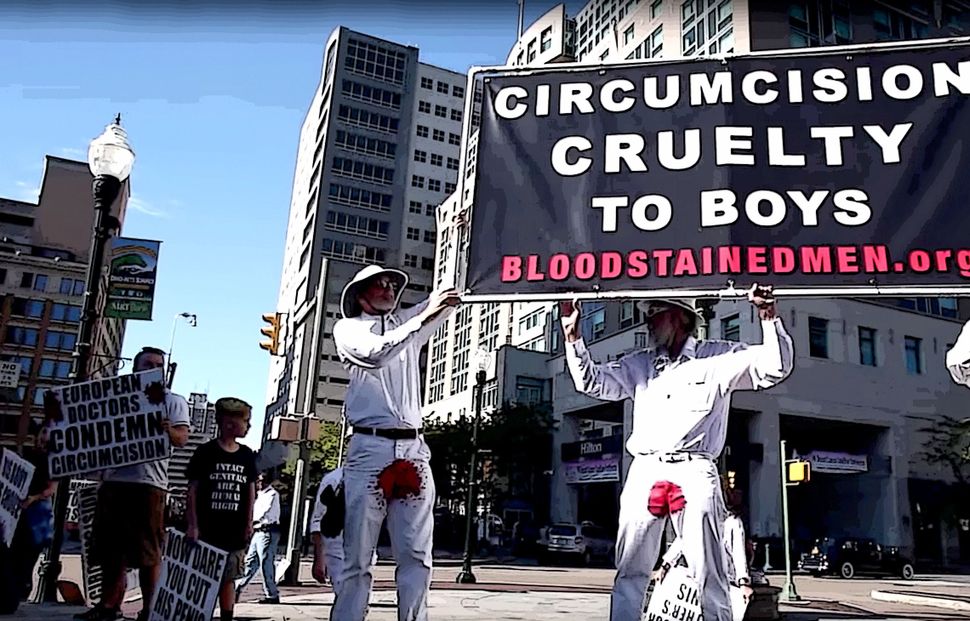 Groups of men in white Tyvek jumpsuits with bright-red stains over the crotch could be seen all over the country this year. They waved eye-catching signs — “Stop Cutting Baby Penises,” “Foreskin Is Not a Birth Defect” — from Miami to Minneapolis to Hollywood.

The group, Bloodstained Men & Their Friends, is part of the national “intactivist” movement — so called for its mission to keep penises intact, or uncircumcised, for any reason.

Circumcision may well be the oldest continuously practiced medical procedure. Yet the movement against male infant circumcision is vehemently opposed to the procedure. “Intactivists” are increasingly protesting on street corners around the country, and a crowdfunded documentary about circumcision is set for release next spring. A court case in Michigan about female genital cutting may open the door to legal challenges against ritual circumcision in boys.

While experts contend that the movement is a fringe one that obscures the scientific data, its leaders think otherwise. “It’s going to really break through in the next year,” said Brendon Marotta, creator of the upcoming documentary “American Circumcision.”

The numbers of “intactivists” are still small, but they represent a broad swathe of the culture. Some come to the cause from the religious right, and say that infant circumcision violates the “right to physical integrity that begins at conception,” as one lawyer told the Houston Chronicle earlier this year. Others are progressive atheists. Though the movement has suffered accusations of anti-Semitism, a sizable portion of it is made up of Jews.

Though there are a number of prominent anti-circumcision organizations, the group with the most attention-grabbing style is Bloodstained Men. Its enigmatic founder, known as Brother K, formed the group in 2012 and often leads the protests. This year the group visited dozens of small and midsize cities across the country.

Bloodstained Men has been increasing its visibility, going from a perennial protest contingent in major coastal cities and in the Capitol to a nationally recognized group. The group made headlines this year in towns across the Midwest and Southern California, racking up weeks of appearances on the roadsides and at government buildings.

A spokesperson for Bloodstained Men said the group is planning more than 60 protest dates around the country in 2018 and will protest the annual meeting of the American Academy of Pediatrics in the fall.

Circumcision does have health benefits, doctors say, in addition to religious value in many communities.

Ronald Gray, a professor of epidemiology at the Johns Hopkins Bloomberg School of Public Health and lead author on studies showing that circumcision has helped reduce HIV infection rates in parts of rural Africa, called “intactivists” a “fringe movement.”

“A lot of people who hold such extreme positions hold them for either emotional or sometimes religious reasons rather than scientific ones,” he said. “My concern with the opposition is that they sometimes are dishonest and misrepresent the scientific evidence, and I think that’s unfortunate.”

Close to three-fourths of men are circumcised in the United States, down slightly from 83 percent in the 1960s, according to a paper published in the Mayo Clinic Proceedings in 2014. A little more than a third of men are circumcised globally, according to data collected by the United Nations. Roughly half of the world’s circumcisions are performed for cultural or religious reasons. Rates of circumcision are highest in countries with Muslim governments, like Uzbekistan and Iran. Most Muslim legal traditions consider the practice — called khitan in Arabic — obligatory for boys.

Cave paintings more than 20,000 years old depict circumcised penises. The practice has roots in cultures on every inhabited continent; researchers believe that it could have started in Africa, before humans began to migrate across the world.

Jewish tradition considers male circumcision obligatory. It is typically done on the infant’s eighth day out of the womb and is performed by a mohel, someone with special training in the procedure. The ritual signifies the baby’s connection to the Jewish people, and harkens back to the father of Judaism, Abraham, who circumcised himself and his son on God’s request. “The brit uniquely strengthens a Jew’s religious identification, and the ceremony instills in the family and in the community present at the ceremony a profound identification with the nearly four millennia of the Jews’ world-changing history,” Dennis Prager wrote in a 2015 defense of the practice for the Jewish Journal.

But an increasing number of young Jewish parents are opting out of circumcision, calling the tradition outdated or invasive.

For about 30 years, a movement organized against the practice in the United States has been gaining steam. The efforts of Bloodstained Men and other intactivist groups are chronicled in an upcoming documentary about circumcision in America.

Marotta spent six years filming “American Circumcision.” He funded the editing of the film through a Kickstarter campaign that raised nearly $90,000. The movie has already begun attracting attention at small film festivals, recently winning an award at a festival in Seattle.

“The focus is on the question of who has the right to make decisions about your body: you, or your parents, your tribe, your culture, your tradition?” Marotta said.

“The argument that intactivists make is that everyone has the right to their own body,” he added. 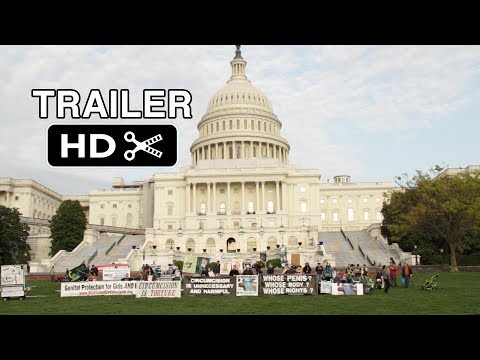 Marotta said his film is scheduled for a small theatrical release in 2018.

The case concerns three people in a small immigrant community in Detroit believed to have arranged genital cutting for nearly 100 girls since 2005. The defendants, two doctors and one clinic manager, are from the small Muslim sect Dawoodi Bohra. The case is the first concerning female genital mutilation brought in the United States.

The case may have repercussions for male infant circumcision due to the strategy taken by the defense. They are claiming a religious freedom exemption from the ban on female genital mutilation, arguing that their practice is noninvasive and thus protected by the Constitution. Unlike more extreme forms of female genital cutting, the Dawoodi Bohra cut a small portion of the vagina’s clitoral hood. In 2016, a social media campaign featured Bohra women posting pictures of themselves holding posters explaining why they are opposed to the practice.

Anti-circumcision activists say the Bohra ritual is not unlike male circumcision.

“This is cutting that is similar in its description and its nature to male circumcision,” said Norm Cohen, executive director of NOCIRC of Michigan. “The cutting is no more severe, if not less severe, than male circumcision.” 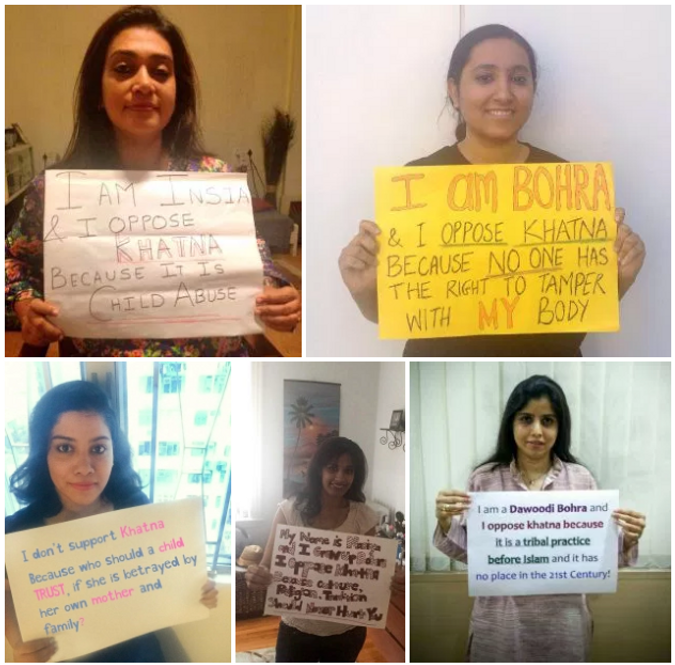 A social media campaign urged women in the Dawoodi Bohra sect to post a picture showing their opposition to ritual female genital cutting, or khatna in Arabic. Image by Twitter/Sahiyo

“If they’re convicted, it sets a precedent that cutting the genitals of a child even in the least severe form is a crime, and is not protected by religious freedom,” Cohen said. He pointed to the original text of the law against female genital cutting, which does not protect the practice on the basis of belief or custom.

“The essence of this is, ‘Why can I cut my son’s foreskin but not my daughter’s foreskin?’” Cohen added.

The Dawoodi Bohra sect has hired famed attorney Alan Dershowitz as an adviser during the case.

Dershowitz told JTA that he is advising the group to simply take a pinprick of blood from the girls’ genitals, similar to the custom for adult circumcised men who convert to Judaism.

“I am categorically opposed to female genital mutilation and I agreed to consult with this group in order to help end it,” Dershowitz said.

The next phase of the criminal trial will begin in the spring.

The anti-circumcision movement has suffered in the past from accusations of inherent anti-Semitism. A major anti-circumcision activist in the Bay Area, Michael Hess, became a lightning rod for controversy in 2011 when he began publishing the comic book series “Foreskin Man.” The pulpy comic featured the eponymous superhero, a blond Superman-type, facing off against Mohel Monster, whose characteristics strongly recall images of Jews in Nazi propaganda.

“Intactivists” say that Hess has not been a prominent figure in the movement in several years. He does not appear in Marotta’s film. Marotta also noted that many of his interviewees were Jewish.

“Jewish circumcision for the most part is not about religious belief, it’s about cultural conformity,” said Ronald Goldman, executive director of the not-for-profit Circumcision Resource Center, and author of the 2015 book “Questioning Circumcision: A Jewish Perspective.”

“It’s way past due for American Jews to reconsider circumcision,” he added.

Despite the controversy over circumcision highlighted by groups like Bloodstained Men, scientists say that the evidence is clear: Male circumcision has health benefits for both men and women. The American Academy of Pediatrics has said the benefits “outweigh the risks,” though the group does not officially recommend the procedure, instead saying that “the final decision should still be left to parents.”

Gray noted that circumcision has been shown to reduce the likelihood of urinary tract infections in young boys, as well as to lower infection rates of sexually transmitted infections like herpes and HPV. Still, he said, blanket male circumcision is not vital in the United States, where HIV infection rates are declining, albeit slowly.

“We confront a very different situation here than in Africa,” Gray said. “It’s less imperative in the U.S.”

With arguments in one of the Michigan cases beginning in June, and Marotta’s film slated for limited release in the spring, the ongoing controversy over male circumcision may get a national audience in 2018.

“The movement to keep children intact has been going for 30 years, but cultural movements and cultural change take time,” Marotta said. “It is more visible and more permissible to talk about than ever before.”

Laura E. Adkins obtained, analyzed and visualized the data in this piece.