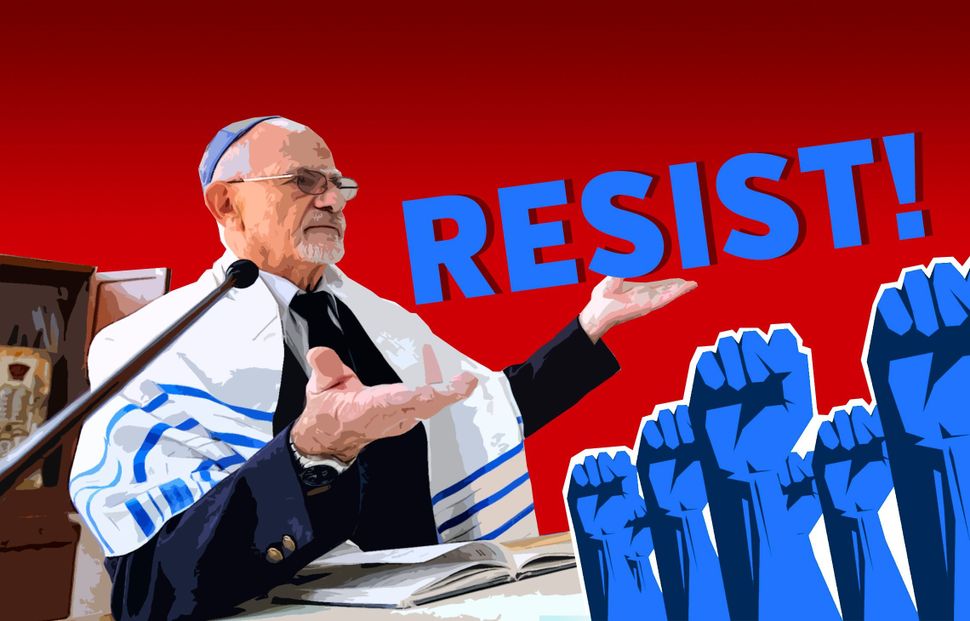 This Rosh Hashana, Rabbi Adam Spilker delivered what he said was his strongest sermon ever as a spiritual leader. His congregation, a veteran Reform synagogue of more than 600 families in Minnesota, had recently signed on to a new campaign organized the Reform movement to ramp up political and social activism amidst the culture wars convulsing the nation. He was proud of the move and wanted to trumpet it from the pulpit.

“Too many Jewish congregations are shying away from the public sphere,” Spilker told the crowd. “But this is exactly the moment for us as Jews to be there.”

Spilker’s synagogue, Mount Zion, is one of more than 140 Reform congregations out of the movement’s 870, that have recently signed on to a denominational pledge called the Brit Olam, Hebrew for “world covenant.” With this campaign, launched in the spring, the Reform movement is wading into the fraught cultural debates roiling the country, enlisting member congregations in a nationwide campaign of political activism with an eye to influencing elections in the months ahead.

“We want to be in position for the 2018 elections,” said Rabbi Jonah Pesner, the head of the movement’s advocacy arm, the Religious Action Center. “To put grassroots pressure on candidates.”

While the religious right has ready access to the country’s halls of power — like the cadre of evangelical leaders who council the president — the largest Jewish denomination in the country is now making a new bid for political power. This new “covenant” shows the movement hoping to capitalize on the fraught political moment by drilling down on three denomination-sanctioned social causes for congregations to support in coming elections: transgender rights, immigrant rights and prison and police reform. Despite some unease in the movement about appearing too political, Reform leadership is doubling down on activism work, trumpeting this new initiative as a significant “shift in our Movement’s social justice work,” in the words of the denomination’s head Rick Jacobs. When a new community signs on, their name joins a scrollable list online, like a scoresheet in a game.

Reform Judaism has long positioned itself as a champion of progressive and liberal causes. The movement’s role in the Civil Rights movement of yesteryear is evoked with a nearly-liturgical reverence and regularity. In more recent decades, the movement has seen dwindling congregational membership. While remaining the largest American denomination, leaders debate how to maintain Jewish continuity when they emphasize universalist social action over firm religious strictures. The election administered a political shock to Reform congregations that has been a powerful catalyst for organizing and filling pews.

“In a polarized political climate, this initiative helps congregations come together,” the RAC website reads, and “map power and available resources to discern where to focus efforts for the greatest possible impact.”

Brit Olam builds on some causes that the movement has already championed — two years ago, for example, the movement passed a resolution on their support for transgender rights. The one-page document three members of a congregant must sign to join the Brit Olam movement was drafted in the fraught months after the presidential election by the RAC. It was unrolled at a RAC event held at the capitol in the spring.

Congregations are given some latitude in terms of how politically mobile they’ll be. The difference between Brit Olam and past efforts are that it allows for local congregations to do their activism with the imprimatur of the Reform movement and with logistical support from the D.C.-based RAC. Planned actions include holding town hall debates with local political hopefuls to determine where they stand on the movement-approved issues or lobbying state senators in person or with letters.

Asch described recent actions her congregation in coastal Maine is undertaking or might soon. The synagogue is working with the local school board to “institute protections for transgender student,” she said. This area of Maine has also seen an influx of refugees from Somalia; Asch said they want to see local schools recognize Muslim holidays like Ramadan. Asch and others recently lobbied Maine senator Susan Collins to vote against the repeal of the health care bill.

Rabbi Mona Alfi, the 49-year-old leader of a Reform synagogue in Sacramento, California, was one of the early signatories of the document.

Because her synagogue of 600 families, B’nai Israel, is already known as a longtime activist congregation, its members are already sympathetic to this type of progressive mobilization. “It was a natural move for us,” she said. “If someone joins B’nai Israel, then they just know who we are.”

But despite embrace of the initiative — and bold pronouncements from choreographed denomination conferences — there is some uncertainty within the movement about how explicitly political congregations should become.

“What is a successful congregational communal strategy in Los Angeles would be a catastrophic divisive experience in small town Indiana or Louisiana,” said Dana Evan Kaplan, a rabbi in Alabama and author of “American Reform Judaism: An Introduction.”

In congregations where there are such political divisions, Kaplan said, the strategy of embracing activist positions would be divisive. “Many of my congregants in Alabama are scratching their heads,” Kaplan said, “and wondering what the Reform movement thinks that they’re going to accomplish.”

At the movement’s massive biannual conference, political advocacy took center stage — and the Brit Olam was lauded from the stage. Veteran Democratic senator Elizabeth Warren decried Trump for “weaponizing divisions” within the country and said she saw the gathering of thousands of Reform Jews as likeminded progressives. Reverend Dr. William Barber, one of the country’s foremost civil rights activist, also sermonized from the stage about Trump, white supremacy and the need for a “moral revival.” The crowd answered with enormous applause.

Anyone who attended the convention would have left with the impression that “the single largest item on Reform Judaism’s agenda is social justice,” Jeffrey Salkin, a pulpit Reform rabbi and blogger for Religion News Service wrote in a soul-searching post in the days after. He asked: But is social action enough to keep cohesion within the movement? “Will social activism ‘save’ the next generation of Jews for Judaism? We don’t know — yet.”

Correction, January 2, 2:00 p.m.: An earlier version of this article misspelled Rabbi Adam Spilker’s name, and misstated the number of congregations that have signed the Brit Olam pledge. It is over 140, not over 130.