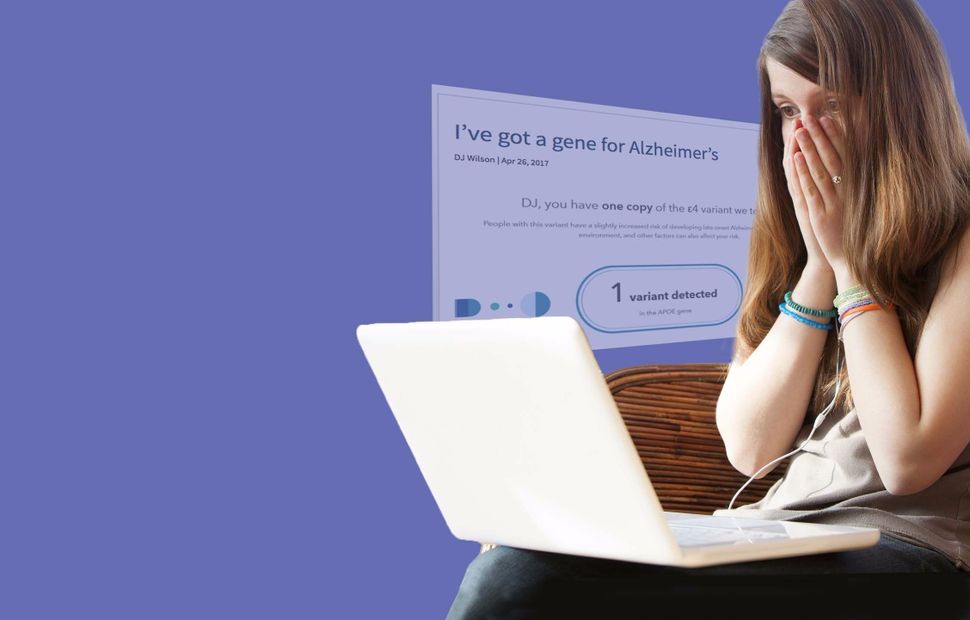 One of the hottest gift items this holiday season is a plastic tube for holding your spit. Of course, it’s a little more high-tech than that.

Companies like 23andMe and Ancestry.com have been making a killing this year selling home genetics tests. With high hopes of discovering their ancestry and learning more about their genetic composition, consumers have shipped their saliva en masse to these high-profile Silicon Valley ventures. In just a few short weeks, a tablespoon of drool can be spun into an accurate picture of how your DNA makes you you.

Kits from 23andMe are of particular interest to the Jews. The company’s report on your DNA can tell you if you could pass on any one of 15 genetic diseases common to Ashkenazi Jews — more tests than for any other ethnic or racial group.

But what many people don’t realize is that when they break the seal on their sterile spit vial they might also be opening a Pandora’s box. Many direct-to-consumer companies like 23andMe offer tests for genes that give you a much higher likelihood of having Alzheimer’s or Parkinson’s, among other degenerative diseases. Simply by mailing your spittle to a lab, you can get potentially devastating news about your future. As the popularity of the services grows, more people are speaking out about how they are coping with the knowledge they never wanted.

“I wish I had known the can of worms I was opening,” said one Philadelphia woman who found out she was at risk for Alzheimer’s. “I’m just not ready.”

Jews like to know, especially when it comes to genetics.

For one thing, it is common for Jewish parents-to-be to test their DNA to see if they are carriers of certain genetic disorders. If both parents have a problematic gene, their child could have the disease. Diseases like Tay-Sachs and Canavan — horrific and incurable conditions caused by abnormalities in the genetic code — affect Ashkenazi Jews at much higher rates than they do the general population. Sephardic Jews are at increased risk for passing on the genes for Cori disease, which can cause organ failure.

“[T]he idea that there is some invisible essence that ties us to our ancestors, even without us behaving Jewishly, is a very appealing idea,” Steven Weitzman, a professor of Jewish history and the author of the recent book “The Origin of the Jews: The Quest for Roots in a Rootless Age” told the Forward in July. “It’s a stable source of identity that is appealing at a time when Jews feel like they’re losing their identity.”

Tests from companies like 23andMe conveniently offer ways to test both for ancestry and for recessive genetic diseases common to Ashkenazi Jews. 23andMe, for instance, tests for Tay-Sachs, Canavan, Gaucher’s disease and Glycogen storage disease type 1A. It also tests for BRCA mutations — genetic markers in women that increase their likelihood of developing breast cancer.

Though the company automatically tests your DNA for both ancestry and health information, receiving your health information — including your likelihood of passing on diseases like Tay-Sachs — requires an additional cost.

Health professionals say there is considerable risk in testing for degenerative diseases like Alzheimer’s without thinking it through beforehand. Research has shown that receiving a diagnosis of Alzheimer’s increases the risk of suicide. (Limited research into rates of suicide among people with Parkinson’s disease has not shown increased risk of suicide.)

There is no evidence that ties Jewish genes to higher likelihoods of receiving a diagnosis for Alzheimer’s or Parkinson’s. In fact, Ashkenazi Jews may carry a gene, common among people who live a long time, that may help protect against Alzheimer’s.

23andMe currently runs the most health tests for DNA samples of any direct-to-consumer genome test provider. Besides late-onset Alzheimer’s and Parkinson’s, they can test for five other diseases, including macular degeneration and celiac disease. Other home DNA test providers, like Ancestry.com, may soon add their own health tests, after the FDA announced in November its intention to loosen regulations on the tests.

There are a few safeguards that 23andMe employs in trying to keep its customers from unknowingly accessing information about the future of their bodily health. You must opt in to receive information about your likelihood of getting Alzheimer’s or Parkinson’s. The company also makes it clear that all it can tell you is if you have certain genes associated with the diseases. Lifestyle choices and environment can affect how those genes are expressed, and if you will ever get the disease in question.

The company also suggests that you speak with a doctor or a genetics counselor before and after receiving any genetic health information.

Some people have tried to make the best of receiving bad news about their health prospects. Julie Gregory, a family therapist who lives in the Chicago area, founded an online forum for people with genetic variants for Alzheimer’s disease after she found out she had two such variants. She named the online community after the variant, apolipoprotein E4, or ApoE4. ApoE4.info now has over 2,000 members who use the site for support and outreach.

Gregory said that the knowledge of having the dangerous variant can in some cases spur people to start leading healthier lives. That’s what happened to her.

“It was a huge tipping point in my life,” she said. “Now I know I have to be healthy.”

Besides learning unwanted information about your health’s future, genetics tests can also reveal unpleasant information about your family. Some consumers have found out that their parents, or siblings, are not their biological relatives. As of 2014, 23andMe estimated that 7,000 users had found previously unknown siblings or parents through the service. Sen. Chuck Schumer, of New York, has also raised questions about the privacy of direct-to-consumer genetics test results.

“Now, this is sensitive information, and what those companies can do with all that data, our sensitive and deepest information, your genetics, is not clear, and in some cases not fair and not right,” Schumer said in late November.

Schumer asked the FTC to “take a serious look at this relatively new kind of service and ensure that these companies can have clear, fair privacy policies.”

Representatives for 23andMe have said the company doesn’t sell individual data. But 23andMe does sell client data to pharmaceutical companies for research purposes, where customer names are replaced with identifying numbers. Cybersecurity researchers have shown that such “anonymized” genetic data can be traced to its real owner if hacked, leaked or even bought legally.

23andMe can also give your data to police if the authorities have a warrant for it. Representatives for the company say they do their best to resist making such disclosures.

In a blog post in December, the FTC urged consumers to buy their home DNA tests from companies with the best track record for privacy. In September, the review site The Wirecutter left 23andMe off its list of the best home DNA tests. Its research showed that even though you have to pay extra to receive health data based on the DNA from your saliva, 23andMe still processes the health data and can sell it to pharmaceutical and biomedical companies. The Wirecutter ranked Ancestry.com and Family Tree DNA as its best-rated tests.

So this holiday season, think twice before spitting in a vial and mailing it off to Silicon Valley. You may not like what you get back in return.