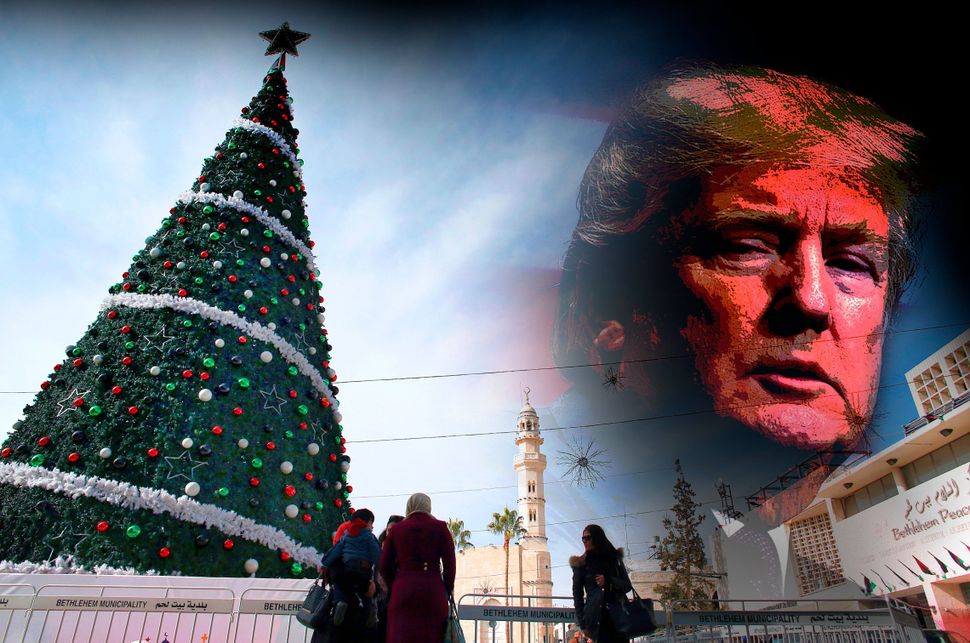 First, he was supposed to come for Christmas. Then, the visit was postponed until the following week, with the explanation that he might be needed to break a tie in the Senate over the tax bill. Now, Vice President Mike Pence’s trip is scheduled for mid-January, but Israeli officials say they have no final confirmation yet for the date or who will meet him.

For local Christians, the question of whether Pence does or doesn’t come is moot — they won’t meet with him. They’re outraged over President Trump’s decision to recognize Jerusalem as the capital of Israel. Pence is a Christian, as they are, but he’s an evangelical Christian, and the evangelical movement pushed hard for Trump’s move. This is the first time a U.S. president has recognized Jerusalem as the capital of Israel.

The Jerusalem decision highlights a growing rift between American evangelicals, who enthusiastically support Israel as the Jewish state for religious reasons, and many Christians in both Israel and the West Bank and Gaza who identify first as Palestinians and see the Jewish state as an oppressive occupier.

American evangelicals are “pushing Israel toward hell,” said Wadie Abunassar, director of the International Center for Consultations, a think tank.

Evangelical Christians have been among Israel’s most fervent supporters both politically and financially. Rabbi Yechiel Eckstein, president of the International Fellowship of Christians and Jews, has raised $1.4 billion for Israel from evangelical Christian donors, many of whom say they give up luxuries like a daily Starbucks latte and donate the money to Israel instead.

About 2% of Israel’s population, including the West Bank and occupied territories, is Christian; 81% is Jewish, and 14% Muslim. (There are also about 300,000 Christians who came to Israel from the former Soviet Union in the early 1990s, but they identify as Israelis, not Palestinians.)

Many Christians, who tend to have more money and relatives abroad than Muslim Palestinians do, have emigrated over the years. Those who have stayed are under tremendous pressure to show their loyalty to the Palestinian cause, which puts them at odds with American Christian supporters of Israel.

Nasser and other Arab citizens of Israel say they worry, for example, that evangelical support is encouraging the Israeli government to make decisions that are dangerous for Israel’s future.

Evangelical Christians, for example, movement have been active in financing the expansion of Jewish settlements in Israel, which Palestinians say make an independent Palestinian state in the West Bank almost impossible to achieve.

“They are being more Catholic than the pope,” Abunassar said. “They are sitting across the Atlantic, and Israel is in the Middle East. It is very dangerous.”

Eckstein says numbers are on his side. Evangelical Christianity, and especially Pentecostal Christianity, is spreading throughout Latin America and Korea, and more than 100 million people have joined the church in the past few years.

For them, he says, the return of the Jewish people to Israel is the fulfillment of a biblical prophecy and a condition for the future return of Jesus Christ as the Messiah.

“These Pentecostal Christians are based much more on a literal interpretation of the Bible as opposed to religious authority,” Eckstein said. “They often quote Genesis Chapter 12, Verse 3, where God promises Abraham that “those who bless you will be blessed and those who curse you will be cursed.”

Yet there is some evidence that younger evangelicals don’t feel the same way.

“Not all evangelicals believe that Israel is the harbinger of the Second Coming,” said Rabbi David Rosen, international director of interreligious affairs at the American Jewish Committee. “Surveys show that there is less support for Israel among younger evangelicals than among those who are older.”

According to the Pew Research Center’s study on religion in the United States, in 2013 more than 80% of white evangelicals believed that God gave the Land of Israel to the Jews. A new study released earlier this month by the Nashville, Tennessee-based LifeWay Research found that 40% of younger evangelicals (age 18–34) had no strong feelings about Israel.

The study also found that while more than three-quarters of older evangelicals have an overall positive perception of Israel, that number drops to 58% among the younger cohort.

In the meantime, Christian Palestinians have banded together in Kairos Palestine, an organization that uses Christian theology to talk about Palestinian independence.

“We proclaim our word based on our Christian faith and our sense of Palestinian belonging — a word of faith, hope and love,” their mission statement proclaims. “We declare that the military occupation of Palestinian land constitutes a sin against God and humanity. Any theology that legitimizes the occupation and justifies crimes perpetrated against the Palestinian people lies far from Christian teachings.”