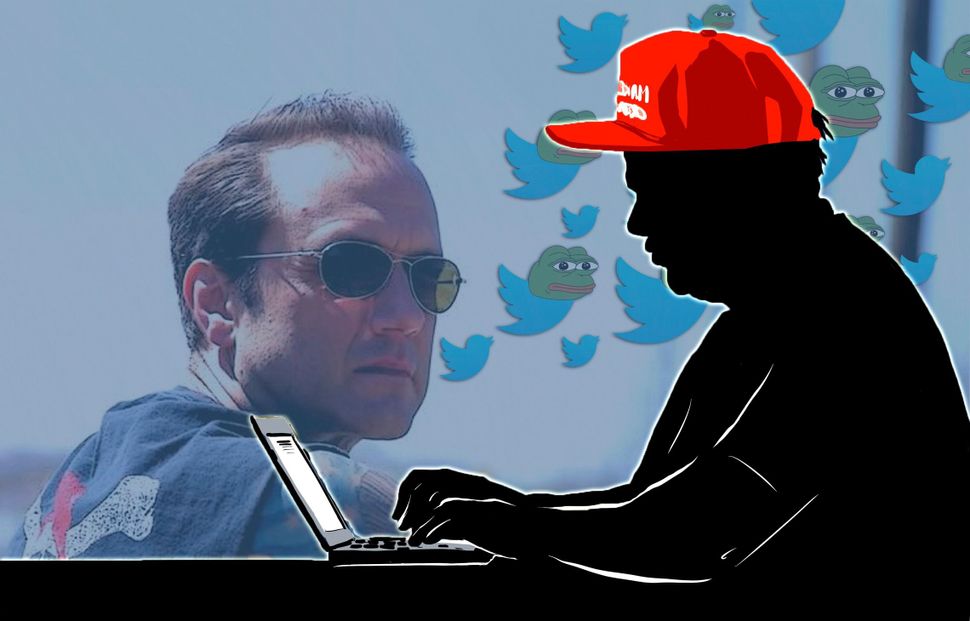 After President Trump’s upset win in the 2016 election, the “alt-right” boasted that their enthusiastic online embrace propelled the reality TV star-turned-politician into office. And yet, since Trump’s election they haven’t enjoyed any significant political success, and were especially disappointed by the defeat of Roy Moore in Alabama.

Now, as the country looks toward the 2018 midterm elections, they say they have found their man in Paul Nehlen, a Republican vying for the Wisconsin congressional seat currently held by House Speaker Paul Ryan.

“Paul Nehlen Is The Alt-Right Politician That Was Promised,” proclaimed a headline on white nationalist Richard Spencer’s Altright website. “Give him your energy now.”

One group, at least, is heeding Spencer’s words: Nehlen’s 89,600-plus followers on Twitter. A Forward analysis has found that this group is very energetic online, and passionate about some of the signature issues of the “alt-right,” like the notion that Jews are a threat to the white “race.” Such a dedicated fan base could bode well for Nehlen’s political prospects, although Ryan did crush him in the 2016 primary.

Yet the Forward also found that the bulk of Nehlen’s followers do not live in his district, or even in Wisconsin. They’re also not very powerful on the platform, and likely won’t translate into political victory in the short term. But Nehlen, his fellow travelers in the “alt-right” and his followers are also pursuing the deeper strategy of using politics and social media to familiarize Americans with their more radical notions.

A twice-married businessman who said he was open to deporting all Muslims, Nehlen, 48, ran against Ryan in 2016 and lost. His bid drew national attention, though, partly because Nehlen was an early and outspoken Trump supporter. Since then, he’s planted himself at the center of the “alt-right” internet, on social media sites like Reddit, Gab and Twitter in particular.

He tweets on average 25 times a day, and has so much faith in the platform that he even enlisted some of his followers in what he said was a battle against the “Jewish media.” “Im going to decimate them all and y’all are gonna help me,” he wrote.

Nehlen is using anti-Semitism to make a bid for support from people like the young white nationalists who are making bold forays into campus outreach and groups behind the explosive rally in Charlottesville, Virginia.

“There is a coherent ‘alt-right’ Twitter network where the same people are posting and reposting each other,” said George Hawley, a professor at the University of Alabama and the author of “Making Sense of the Alt-Right.” “Nehlen fits right within that.”

An Anti-Defamation League report that came out this week shows that of the 34 people killed at the hands of extremists in 2017, the majority of the murders were committed by right-wing extremists, primarily white supremacists. Nehlen does not espouse violence or call for murder, but white nationalists champion him as one of their own.

While some major white nationalist and “alt-right” figures do follow him, most of his followers are low-level accounts that are in the “alt-right” and pro-Trump orbit. Though his message is getting regurgitated, it’s mostly staying in the same small circle and being shared by people with little to no influence of their own.

Nehlen’s followers love Trump, “alt-right” icon Pepe, America and God. The graphic below shows the most-used words in their bios. 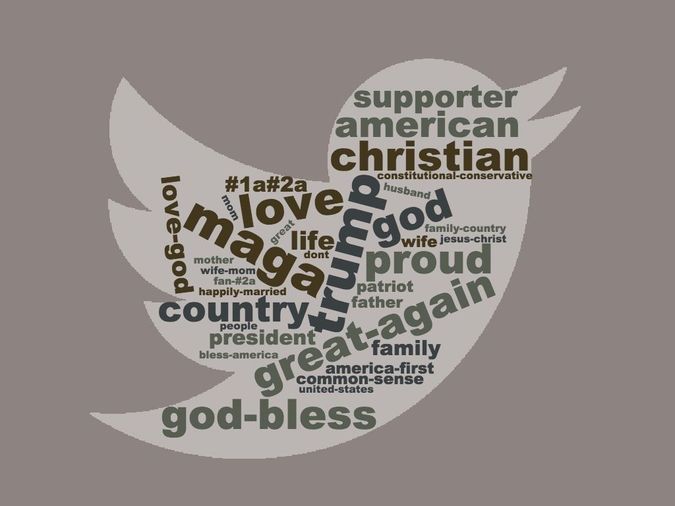 His followers are seemingly always online, but not often coming up with original content. According to the Twitter analytics tool Followerwonk, 35% tweet every hour, which is far above the average of a few times a day. Retweets, rather than original posts, make up the majority of their timeline.

But even though they tweet often, they’re not among Twitter’s most influential users. About 80% of them have below-level influence on the platform, according to Followerwonk, meaning far fewer retweets than the average users.

Judging by who else they follow, they are also consuming a steady diet of “alt-right” content. Two-thirds of Nehlen’s followers also follow Breitbart News, known as “the platform of the ‘alt-right.’” A third follow the young white nationalist group Identity Evropa, which targets college campuses for recruits, and another third follow Jared Taylor, an old-line white nationalist with an academic background. A quarter follow “alt-right” figurehead Richard Spencer, who famously led a room full of supporters in a celebratory Nazi salute after the election of Trump.

Nehlen has endorsed the hardcore white nationalism of these groups — in particular by advancing the popular “alt-right” belief that whites are under siege in America — and the need to advocate for their white identity against a rising tide of brown and black people. Jews are seen as benefiting from — or orchestrating — the downfall of the white race.

He also champions the popular #ItsOkToBeWhite hashtag and other terminology and visuals, like Pepe, the “alt-right” frog figure; “kek,” another frog icon of the movement, and “cuck,” the shortened version of “cuckservative,” a racially and sexually charged neologism used to deride conservatives who supposedly abandoned their true values.

Careful with the implied antisemitism there, Tucker.Maybe you can answer this question: If pro-White is “White supremacy,” what is pro-Jewish?Nobody seems to want to step up to the plate on this one… https://t.co/loSL1YVKg1

Nehlen’s shift into more explicit anti-Semitism is even risky within the “alt-right.” The movement is broad and still loosely organized — and plagued by public spats and debates over ideology. The so-called “Jewish question” is often the source of schisms. Indeed, Nehlen’s former patron Breitbart, still headed at that time by Steve Bannon, disavowed him when Nehlen’s Jew hatred became too obvious. Internet provocateurs like Milo Yiannopoulos or Gavin McInnes, for example, draw from the movement’s subversive style and aesthetics but do not call themselves white nationalists. They also reject anti-Semitism.

The “alt-right” has yet to produce and champion another Trumpist candidate. Unlike conventional political movements, the “alt-right” doesn’t seem to have any sort of real-world mechanism for grooming candidates, experts say. Instead, movement leaders offer their online media support to candidates they view as sympathetic. 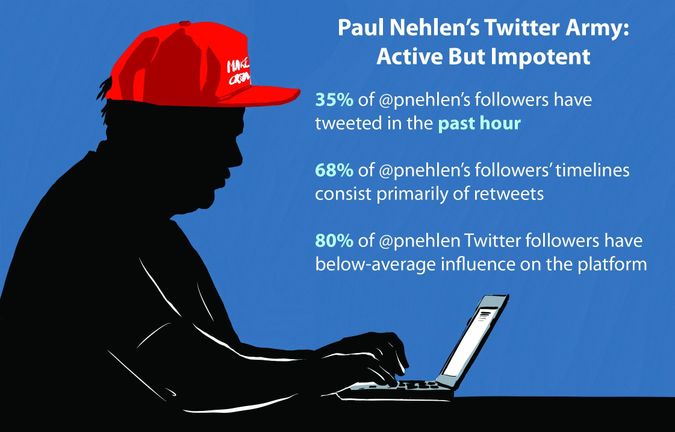 “The ‘alt-right’’s strongest organ is their media apparatus,” said Jared Holt, a researcher at Right Wing Watch. “That’s the greatest asset they can offer — to hold a candidate’s hand and walk them down this path.”

Even a losing candidate like Nehlen is seen as a win of sorts for the “alt-right,” said Spencer Sunshine, a researcher for Political Research Associates.

“Alt-right” leaders like Spencer hope that even if Nehlen loses, he will have stretched the bounds of politically acceptable debate — bringing the language of an explicitly white identity movement into mainstream arenas.

Nehlen is pushing their radical agenda out of Twitter and Reddit enclaves and into the mainstream press, Sunshine added. “Even if he doesn’t win, he’s spreading their doctrine,” he said. “They’re getting press.”