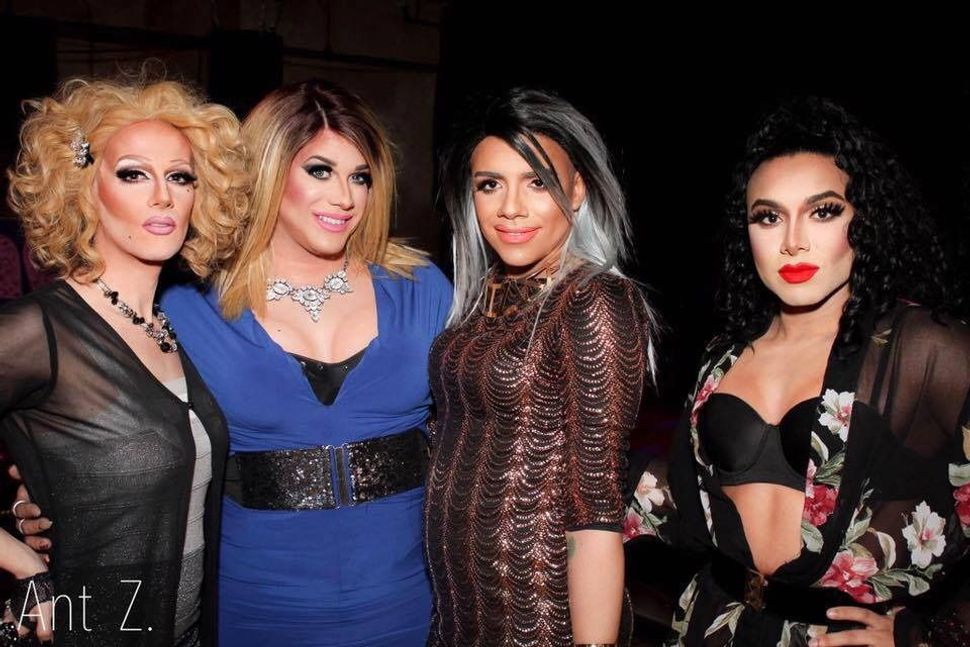 (JTA) — The Saturday evening event at a Jewish day school in western Massachusetts will in many ways look like a typical havdalah. There will be a musical ceremony marking the end of Shabbat with a braided candle, grape juice and spice bags.

But the event at the Lander Grinspoon Academy in Northampton will also feature storytelling by a less typical guest: a drag queen.

The school, together with local Jewish organizations, is hosting a Jewish version of Drag Queen Story Hour, a national program in which drag entertainers read stories to children. The goal of the program, launched in San Francisco in 2015, is to give kids “glamorous, positive, and unabashedly queer role models.”

A local drag queen, Jenayah De Rosario, will be reading “Sparkle Boy,” a book by Jewish children’s author Leslea Newman, about a young boy who likes to wear glittery clothing. Newman will be on hand and read two of her books: “Here Is the World: A Year of Jewish Holidays” and “Heather Has Two Mommies,” which when published in 1989 drew praise and controversy for portraying a family with same-sex parents.

The event will also feature plenty of glitter, including workshops to make sparkly spice bags and crowns, a photo booth with costumes and face painting.

Amy Meltzer, the school’s director of family engagement, came up with the idea for Sparkle Havdalah: A Drag Queen Story Hour after a local library hosted a drag queen story hour organized by Newman. Meltzer, who serves in the same role for event co-sponsor Congregation B’nai Israel of Northampton, said hosting the havdalah event aligned with the values of the local Jewish community.

“We live in a community that is progressive, has many LGBTQ families and really celebrates people being themselves and not being stuck with really rigid ideas of what gender needs to look like, so it felt like a really natural fit for our community,” Meltzer told JTA.

Lander Grinspoon Academy is a nondenominational day school that welcomes children “from all Jewish traditions and backgrounds.”

The area, which includes Smith College, Mount Holyoke College and the Amherst campus of the University of Massachusetts, has a national reputation for being LGBT-friendly. The event is co-sponsored by a range of Jewish institutions in the area, including the school and Congregation B’nai Israel of Northampton along with Gan Keshet Preschool, Abundance Farm, PJ Library of Western Massachusetts and the Upper Pioneer Valley, and the Beit Ahavah synagogue . The Harold Grinspoon Foundation, which runs PJ Library and is headquartered in nearby Agawam, is providing funding.

In 2014, PJ library, a nonprofit organization that sends free Jewish children books and CDs to families, for the first time included a book featuring LGBTQ characters, “The Purim Superhero.” However, it chose to make the book about a young boy with two fathers available by request only rather than sending it out to all who subscribe to the service. PJ Library drew both praise and criticism from the LGBTQ community and allies — praise for including the book, criticism for treating it differently than other books.

Newman said she sees the Lander event as a step forward.

“As far as I know, besides ‘Purim Superhero,’ there hasn’t been a [PJ Library] book that touches on issues of LGBTQ families,” she said. “I would like to think that they at some point might consider heading in that direction. I know they have a very broad constituency, and it’s hard to please everybody, so I am absolutely thrilled that they are sponsoring this event.”

“We have all sorts of family structures in our community, and we embrace that fully,” Hirsch Schneider told JTA, adding that she hoped to plan future events for LGBTQ families.

Meltzer wants to attract families who might not otherwise attend a Jewish event. She is expecting a large turnout and has bought craft materials for 100 children.

“People have certain stereotypes that a Jewish community might have a narrower approach to understanding gender, so it’s a message that we’re a welcoming community and an inclusive community,” Meltzer said.

She noted that the event might not be a hit everywhere.

“We know this is a good fit for our community,” she said. “I have no suggestion that every community ought to have a drag queen havdalah.”