Did The Nazis Make Jews Wear Shoes With Torah Insoles? A Trump Official Says So. 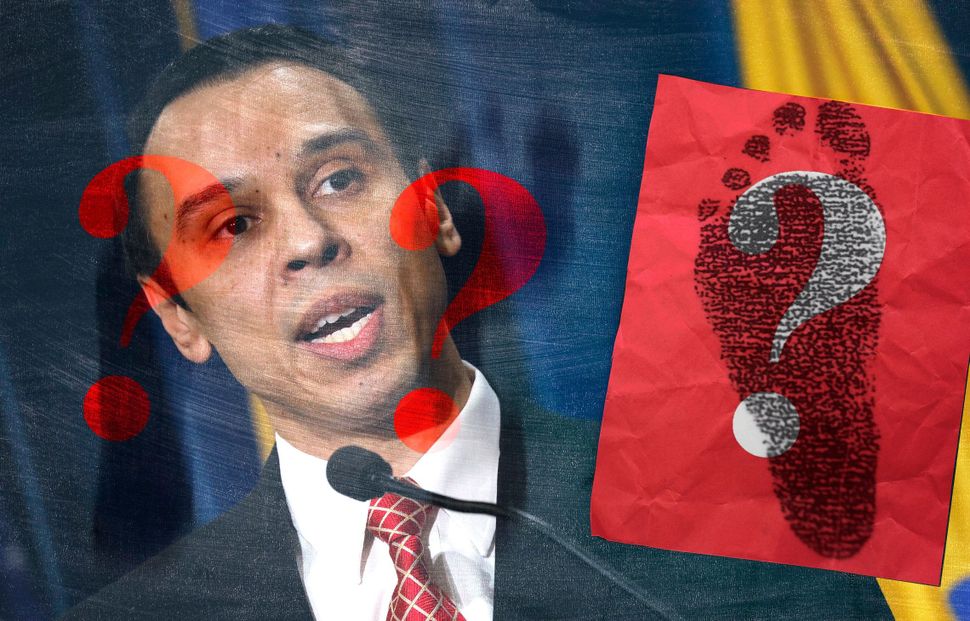 The occasion was the launch of the Conscience and Religious Freedom Division at the Department of Health and Human Services, announced by the division director, Roger Severino. The purpose of the new body is to protect health care providers who refuse to carry out medical procedures or treat people as if doing so would violate their religious beliefs.

Until the creation of this protective body, Severino said, such workers reminded him of Jews in the Holocaust.

Here’s where shoes come in.

The top HHS official said he became aware of the notion of conscience protection, of the kind that he seeks to offer anti-abortion and anti-gay health care providers, when he read a book about the Holocaust. The book was part of a Time-Life World War II series that Severino read as a child.

“There was one photograph in particular which was an outline that looked like a footprint, and there was writing in Hebrew,” Severino said. “And when I looked on the caption, it said it was a cutout of a shoe insole that the Nazis had forced Jews to wear on their shoes, so that every step they took, they will be violating their conscience.”

His conclusion: “I could see the common humanity of why if somebody’s forced to violate their conscience in every step they take, how it’s an attack, really, on their human dignity.”

As expected, Jewish groups took issue with the use, once again, of the Holocaust to make the case for anti-abortion and anti-LGBTQ views. The Anti-Defamation League issued a statement saying that invoking the Holocaust in this context is “deeply offensive and inappropriate.” The group called the comparison “beyond the pale.” The Nazis systematically killed gay men and lesbians in addition to Jews and other groups, like the Roma.

But there’s another issue, relating to the comparison itself.

Severino’s claim that Nazis forced Jews to wear shoes with insoles carrying Hebrew writing, presumably from desecrated Torah scrolls, is not a well-known historical fact. Several Holocaust scholars contacted by the Forward could not recall ever having heard of it. “I don’t know of any instances like this,” said Michael Berenbaum, who was the project director of the United States Holocaust Memorial Museum and the head of its research institute. “I don’t doubt it may have happened, but I don’t know it did.”

There is plenty of evidence showing the Nazis’ use of Torah scrolls, looted from European synagogues, to make handbags, wallets, drums and other goods requiring leather parchment that was scarce during the war. This use, as explained by Yad Vashem, Israel’s Holocaust museum that includes artifacts made out of Torah scrolls in its collection, was systematic and was part of a Nazi-organized campaign. However, the only evidence in the museum of using Torah parchment for making leather shoe insoles is an insole that was found in the shoe of a Nazi officer in Italy. Other samples of shoes made from Torah scrolls carrying Hebrew words are presented in Jerusalem’s Chamber of the Holocaust museum. They, too, were used by German soldiers, not by Jews at the orders of the Nazis.

In response to the Forward’s inquiry, Severino said, through a spokesperson, that “It may not have been clear from my remarks so I want to clarify that the Hebrew writing I was referring to was the Hebrew scriptures which makes it all the more tragic because Jews were forced to defile their holy book and violate their conscience with every step they took.” He added: “I was so struck as a young child by that image that it is one of my first memories of becoming aware of the issue of conscience and why it is a universal human right. I have not seen the image in many years, but the memory and its importance stuck with me.”

Did The Nazis Make Jews Wear Shoes With Torah Insoles? A Trump Official Says So.