One Man Has Taken Over A Historic Organization. Is It Good For The Jews? 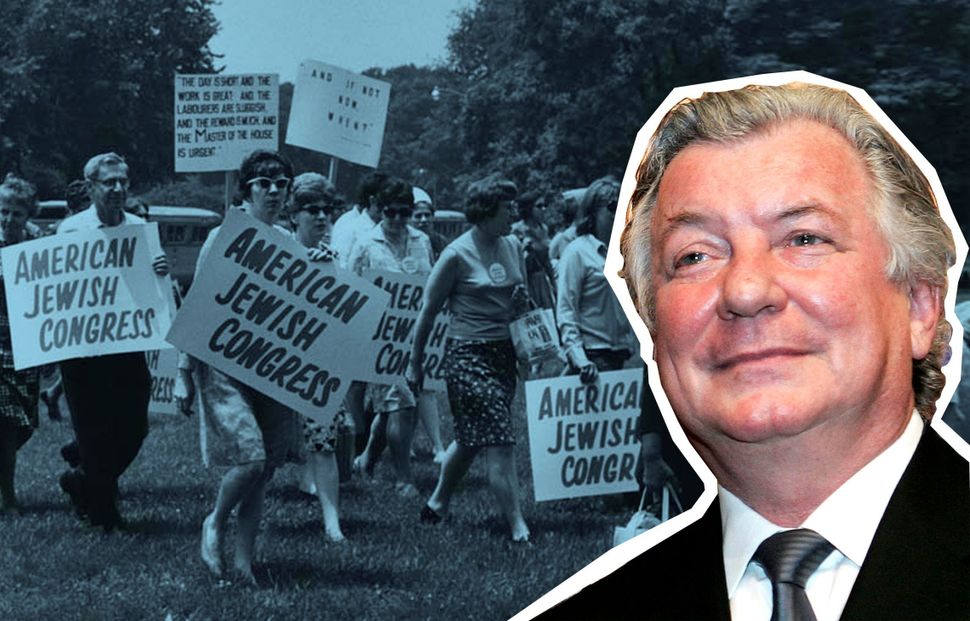 In 2010, the American Jewish Congress announced it was shutting down. This past summer, it started sending out fundraising emails. Lots of them. At times in 2017 they arrived almost daily.

The emails posed a puzzle: Why was a defunct Jewish organization trying to raise money? And why was it selling a T-shirt with the phrase “Make Hanukkah Lit Again” across the front?

It turns out that instead of shutting its doors, a wealthy Jewish businessman named Jack Rosen had quietly transformed AJCongress into his own private Jewish State Department, taking meetings with presidents and expounding on Jewish policy. Now, he’s bringing it out of the shadows.

“For the purpose of talking to leaders around the world and getting them to support our views on Israel, it doesn’t take a huge staff,” Rosen told the Forward. “We prefer to be sort of smaller.”

In fact, AJCongress is pretty much just Rosen. Though its name and history imply that it speaks on behalf of some sort of representative body, Rosen answers to only a small board that includes two of his sons.

But the story of AJCongress is not as unusual as it might seem. Many Jewish groups have shed their grassroots structures amid a focus on major donors. AJCongress is an extreme example of the phenomenon that’s changing the face of the Jewish establishment.

Founded in 1918, AJCongress was a secular, liberal-leaning activist group organized democratically. Led for decades by Rabbi Stephen S. Wise, it favored popular protest and vocal public advocacy, and was active in litigation in support of civil rights and other domestic causes. Grassroots members set the organization’s policies through a complex internal process.

AJCongress collapsed in 2010 after decades of decline and catastrophic losses resulting from Bernie Madoff’s Ponzi scheme. Rosen took over the organization under terms that included the abolishment of its network of local chapters and its membership-driven model. The group is now run by Rosen and a board of 10 people. A new executive director was hired in late 2017; he has three staff members working for him.

“The theory is, you don’t have to have 500 people show up at a convention to vote on every issue and every resolution, or overturn everything that was done in the prior year,” Rosen said.

Today, most of the activities of AJCongress consist of Rosen taking meetings. Rosen said that the group’s unwritten mission statement is to find the 500 most important decision-makers on issues relating to Israel and to get to know them. He does most of that relationship building. A lot of it seems to happen around the dinner table at his apartment near Manhattan’s Central Park.

One night in 2016, Rosen had the Argentine president, Mauricio Macri, over for steaks. Macri brought his foreign minister. Rosen invited a Wall Street Journal columnist, “a couple of senators, congressmen [and] a whole bunch of Jews,” he said.

Partway through the dinner, Rosen interrupted to criticize Argentina’s vote in favor of a UNESCO resolution despised by pro-Israel groups. Macri agreed that it was a bad vote. Weeks later, when another version of the same resolution came up again, Argentina abstained.

Some former leaders of the old AJCongress don’t like what Rosen has done with the group.

“I think it unfortunate that an organization with the history and the remarkable success over the course of 100 years has been decimated, and now appears to be controlled by one individual,” said Jay Umansky, a former member of AJCongress’s governing council and the former president of its St. Louis branch.

In recent weeks, Rosen has been making efforts to shore up AJCongress’s image. In January, Rosen invited a Forward reporter to the marble-floored office of Rosen Partners, his investment firm, in an art deco office building with a grand piano in the lobby, just down the block from Trump Tower.

“Ban Ki-moon and Kofi Annan have been to dinner at my house several times,” he said, referring to the former secretary generals of the United Nations.

Rosen is known as an assiduous cultivator of relationships. He was a friend of the Clintons and close enough to President George W. Bush that the president gave him the nickname “Rosie.” He’s had Robert de Niro over for dinner. “You’re in New York, you come across all kinds of people,” he said.

Born in a displaced persons camp in Germany — the same DP camp where Zionist Organization of America President Morton Klein was born — Rosen grew up in the Bronx with a real estate developer father. Rosen, too, is a real estate developer, though the interests of his firm, Rosen Partners, are sprawling. He has close ties to the Russian Jewish billionaire oligarchs behind Alfa Group, Mikhail Fridman and German Khan, forming a massive joint investment venture with them in 2012 and serving as a member of the advisory board Altimo, their telecommunications investment firm. He also owns a number of large Manhattan buildings.

In one instance, Rosen’s business interests have messily intersected with his leadership of AJCongress. In 2012, AJCongress brought Allentown, Pennsylvania’s mayor, Ed Pawlowski on its annual mayors’ trip to Israel, called the International Conference of Mayors. Later, Pawlowski solicited political donations from Rosen while trying to drive a city contract to a security firm Rosen controlled. Pawlowski was indicted in July 2017 on federal corruption charges over this and other incidents and is currently on trial. Rosen has not been accused of any wrongdoing, and though he donated to Pawlowski’s aborted U.S. Senate campaign, the city contract never went through.

Rosen said that he had never gone into business with any mayor whom AJCongress had invited on the International Conference of Mayors. “We get it all the time,” he said. “We get everybody, including U.S. mayors, who want people to invest. We’re successful businesspeople. I don’t believe I’ve ever done a deal with a mayor” he met through the conference.

The meetings that Rosen takes with world leaders are undeniably high-level. He has met with the controversial new crown prince of Saudi Arabia, Mohammed bin Salman (“He’s a very interesting guy”) and with the emir of Qatar. He attended the wedding of the son of the prime minister of the United Arab Emirates, Sheikh Mohammed bin Rashid Al Maktoum. In an email, a spokesman for AJCongress said that the organization had other programs besides Rosen’s diplomatic work. Most of that appears to consist of op-eds and statements by Rosen on anti-Semitism, Iran and U.S.-Israel ties.

Abraham Foxman, the former leader of the Anti-Defamation League, said that Rosen has earned his position as a spokesman for the Jews. “Jack Rosen earned his stripes, both in time and in money and in effort,” Foxman said. “The organization disappeared. But that doesn’t mean that he has to disappear. He’s not a fly-by-night.”

Still, the current AJCongress is a far cry from its former self. In 2015, the most recent year for which tax filings are available, the group raised $340,000 and spent $503,000. At the end of that year, the organization was deep in debt, with liabilities that amounted to a half-million more than it had in the bank.

In its persistent fundraising emails and its public statements, AJCongress focuses almost exclusively on Israel, a historical departure for the organization. While AJCongress was staunchly Zionist from its earliest incarnation, it concentrated during its heyday on domestic advocacy. It fought for abortion rights, women’s rights and civil rights. Its legal efforts were largely responsible for the end of the quota system in college and university admissions. As groups like the American Jewish Committee focused increasingly on foreign affairs, AJCongress specialized in domestic matters.

It differed, too, in its tactics. In contrast to the elite-driven philosophy of AJC, which preferred to seek backchannels through which its wealthy leaders could influence policy, it worked through public advocacy and organizing. The organization had tens of thousands of members and regional offices across the country. Its members had a direct hand in setting the policies of the organization through conferences and resolutions.

Today, AJCongress is the epitome of the elite-driven model. The grassroots model, meanwhile, has been abandoned. Broad-based groups like B’nai B’rith and Jewish War Veterans of the United States of America have shriveled, while AJC, which has always emphasized elite leadership, has grown, and had nearly $70 million in revenue in 2016. Meanwhile, Jewish federations across the country have emphasized fundraising from wealthy donors.

“Everybody wants to maintain the appearance of larger representation, but increasingly actual decision-making is confined to a relatively small number of people,” said one long-term observer of the Jewish communal scene, who asked not to be named. “The model of the grassroots, policy-determined-by-democratic-vote national organization is, for better or for worse, in eclipse now on the American Jewish scene.”

Foxman said that the legitimacy of a spokesman for the Jews is always in the eyes of the beholder. “It’s always been an issue,” he said. “Where do you get your credentials?… To a large extent, it’s been what the outside world sees.”

For some younger Jewish activists, that may not be enough.

“To me it’s emblematic of the out-of-touch establishment,” said Yonah Lieberman, a leader of the leftist Jewish group IfNotNow, which has a young grassroots constituency. “There’s dozens of old white Jewish guys who are attempting to speak for the entire community. And for too long we’ve let them do that.”

One Man Has Taken Over A Historic Organization. Is It Good For The Jews?