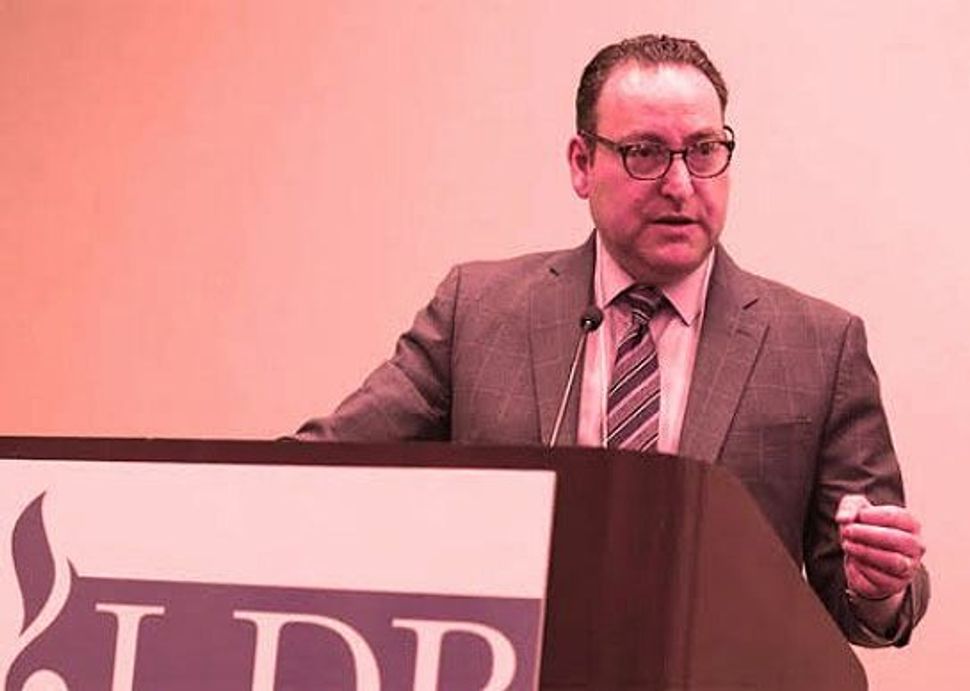 Hillel International is facing down a revolt over its endorsement of a controversial Trump administration nominee for a key position at the federal Department of Education.

The Jewish campus group sent a letter in November to a U.S. Senate committee endorsing George W. Bush administration alumna Kenneth Marcus’s appointment to lead the DOE’s Office for Civil Rights, calling him a “true leader in fighting discrimination” for his work defending Israel against the boycott, divestment and sanctions movement on campus.

But Marcus, who founded and runs a Jewish legal advocacy group called the Louis D. Brandeis Center, has also endorsed the current secretary of education’s rollback of an Obama administration policy that dictated stricter standards for handling campus sexual harassment. That position is deeply unpopular among many of Hillel’s constituents.

Now, academics, students and some within Hillel are pushing the organization to reverse its endorsement of Marcus, and they are also questioning why the group chose to take a public position on the issue. Hillel has refused to reverse the endorsement, though it says that it does not intend to support Marcus’s positions on campus sexual harassment.

“An organization that has at the core of its mission the goal of serving university students seems to me to be making a dubious choice deciding to endorse a candidate who is on record agreeing with dismantling… guidelines that protect students in cases of sexual assault,” said Lila Corwin Berman, a professor at Temple University.

In an email sent to campus Hillel directors Friday, Hillel President and CEO Eric Fingerhut acknowledged that the Hillel staff had raised questions about the Marcus endorsement. He said that Hillel International’s board would consider new procedures by which the organization’s leadership would in the future consult with Hillel staff and students before taking public positions on political issues. He also said that he had meant to endorse Marcus’s work on anti-Semitism only, not his position on the campus sexual assault issue.

“I regret that my effort to affirm Ken’s strong work in this area has become intertwined with this political debate,” Fingerhut wrote. “I appreciate hearing from so many of you over the past several days, and I’m sorry again for any challenges this has caused you, your staff or your students.”

The opposition to Marcus from Jewish groups focuses on his support for Secretary of Education Betsy DeVos’s decision to revoke a 2011 guidance document issued by the Obama-era Department of Education, known as the “dear colleague” letter. The letter established that Title IX of the federal education law, which prevents gender-based discrimination in colleges, made federal funding for colleges contingent on their responses to incidents of sexual violence on campus. The letter also provided specific guidance on how schools should adjudicate claims of sexual harassment and assault.

DeVos rescinded the letter in 2017, saying that the regime it imposed had “failed too many students.” Critics of the policy had said that it had deprived students accused of sexual misconduct of due process.

In its endorsement of Marcus, Hillel appears to have stumbled onto the midst of the fiery debate over the guidelines.

A petition drafted by Berman and Ari Y. Kelman of Stanford University demanding the revocation of the Marcus endorsement received signatures from 80 Jewish studies faculty members in early February.

“We find it alarming that any campus organization would support a governmental appointee whose public statements put him at direct odds with the safety of our students,” the letter read, citing his position on the Title IX guidelines.

The left-wing student activist group Open Hillel issued a statement of its own, saying its members were “dismayed” at the endorsement.

“Without the safety net of Title IX, not only will it be harder for survivors to come forward and receive justice, but it will also become nearly impossible to accurately diagnose the scope of the problem of sexual assault on campus and on high school campuses,” Liana Thomason, a junior at Pennsylvania’s Bryn Mawr College and an Open Hillel organizer, said in a statement. “Hillel’s decision undermines both survivors and the honest people working within the system to help them.”

The endorsement of Marcus also appears to have been controversial within Hillel. The organization held a conference call Thursday about the endorsement open to staff members at local Hillels nationwide to discuss the issue.

In a press statement distributed after the conference call, Fingerhut said that he hadn’t intended to endorse Marcus’s position on the Title IX rollback. “My support of Ken Marcus was intended to express appreciation for the strong work that Ken and the Brandeis Center have done in combating anti-Semitism on college campuses,” Fingerhut said. “In this role, he has been collaborative and respectful of differing opinions, and he understands Hillel’s important role on campus. I regret that my effort to affirm Ken’s strong work in this area has become intertwined with this political debate.”

Fingerhut wrote that Hillel sees itself as an advocate for victims of sexual assault.

Meanwhile, the leading national civil rights coalition, The Leadership Conference, issued a statement of its own, opposing the confirmation of Marcus. Signatories included both the National Council of Jewish Women and the Jewish Labor Committee. In addition to the Title IX issue, The Leadership Conference raised concerns about Marcus’s “willingness and ability to enforce civil rights law.” Among other things, it referred to his anti-BDS legal advocacy, saying that he had “sought to use the [Office for Civil Rights] complaint process to chill a particular political point of view, rather than address unlawful discrimination.”